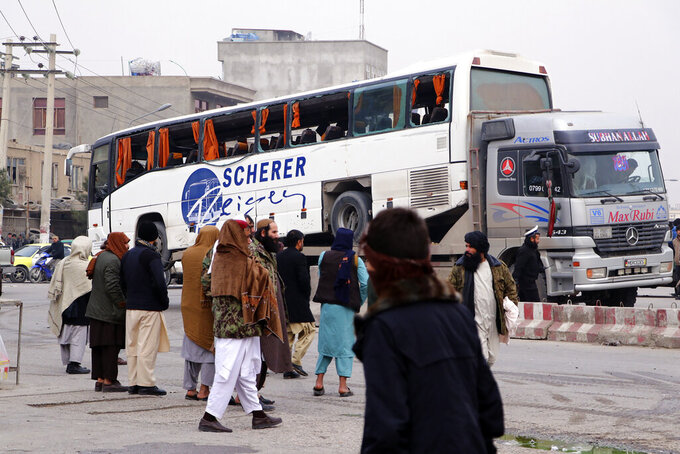 ISLAMABAD (AP) — A roadside bomb went off near a bus with government employees during rush hour on Tuesday morning in northern Afghanistan, killing six people, a Taliban official said.

The bomb was placed inside a cart by the side of the road and detonated when a bus belonging to the Hiaratan gas and petroleum department was taking employees to work.

Separately, at least six people were wounded when a bomb exploded at the money exchange market in the city of Jalalabad, the capital of eastern Nangarhar province, according to Abdul Basir Zabuli, a Taliban-appointed spokesman for the provincial police chief.

Zabuli said the bomb was planted near the market and that the wounded were in stable condition, according to a hospital report. An investigation was underway, he added.

No one claimed responsibility for the bombings in Balkh or Jalalabad, but the regional affiliate of the Islamic State group — known as the Islamic State in Khorasan Province and a rival of Afghanistan’s ruling Taliban — has increased its attacks since Taliban takeover in 2021.

Images posted on social media from the scene in Balkh show a damaged bus and another vehicle, along with several carts and fruit stalls lying scattered by the roadside following the explosion. The bus was later towed away.