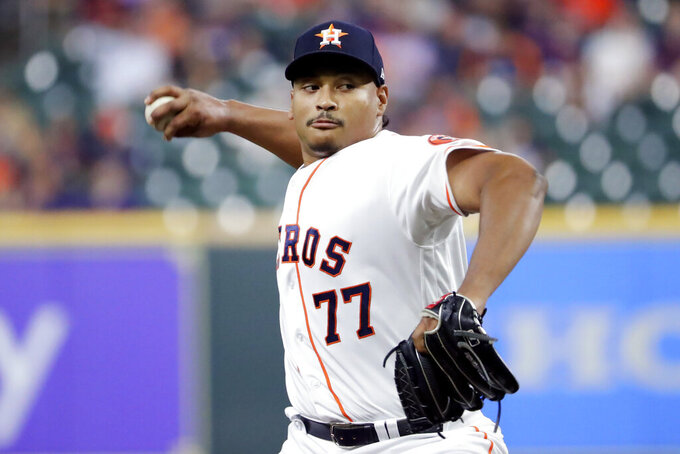 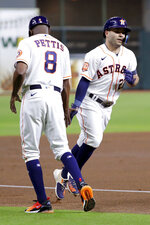 HOUSTON (AP) — Jose Altuve hit two of Houston's five home runs to lead the Astros to a 10-2 victory over the Arizona Diamondbacks on Tuesday night in a game where Yordan Alvarez left with an ankle injury.

The Astros, who have already won the American League West title, moved within one win or one loss by the New York Yankees of securing home-field advantage through the AL playoffs.

Altuve made it 5-1 with his solo home run with two outs in the sixth off Ian Kennedy. David Hensley hit his first major league homer with a two-run shot later in the inning, and the Astros went back-to-back when Alex Bregman sent Kennedy's pitch on the train tracks atop left field.

Jeremy Peña's two-run drive made it 10-2 in the eighth.

Alvarez, who is tied for second in the American League with 37 homers, exited in the fifth inning with left ankle discomfort after rolling his ankle running out of the box on a single in the first.

He looked to be in some pain as he jogged to first base and was checked on briefly by manager Dusty Baker and a trainer before remaining in the game. Serving as the designated hitter on Tuesday, he struck out in the third inning before being replaced by Hensley for his at-bat in the fifth.

Baker said X-rays were negative and that he should be OK in a couple of days.

“We just thought it was better to take him out and look after him," Baker said.

Lance McCullers Jr. was scratched Tuesday afternoon with an undisclosed illness and Luis Garcia started in his place. Garcia (14-8) allowed four hits and one run with six strikeouts in six innings to get his sixth straight win.

“He was aggressive with his fastball in the zone,” Baker said. “He had excellent command of it. And he had a good cutter and a good slider. He displayed good stuff tonight, very good stuff."

Arizona starter Zach Davies (2-5) yielded six hits and four runs in 4 1/3 innings to take the loss after not factoring in the decision in his last 11 starts.

Geraldo Perdomo and Daulton Varsho hit solo homers for the Diamondbacks, who lost for the fourth time in five games.

Hensley's big night came after entering the game on an 0 for 9 skid.

“That’s everything that I’ve been working for," he said. “To see the success happen, it feels really good."

Baker was impressed with the way Hensley filled in after Alvarez went out.

“That was pretty awesome for a young man to hit his first home run batting in the order where Alvarez usually hits,” he said. “We’re all happy for him. He’s been doing a good job for us."

Altuve put the Astros up early with a leadoff shot. It was his 12th leadoff homer this season, tying the franchise record set by George Springer in 2019.

There were two outs in the third inning when Perdomo tied it with his home run to right-center field.

The Astros took a 2-1 lead on a sacrifice fly by Trey Mancini in the fourth. Altuve doubled in the fifth and later scored on a single by Hensley that chased Davies.

Taylor Widener took over and was greeted by a single from Bregman. Widener then plunked Kyle Tucker to load the bases before Yuli Gurriel grounded in a forceout that scored Hensley and left Tucker out at second.

Arizona pitching coach Brent Strom, who spent 2014-2021 in the same position with the Astros, was emotional in his first trip to Houston since leaving the team after the World Series last year.

Strom, credited with much of the development of Houston’s young pitchers, wept openly as he discussed how much his time with the team meant to him.

“I’ve been looking forward to this,” he said. “I grew up with these guys.”

Strom was presented with his AL Championship ring before the game.

“I almost forgot (about the ring) because I was so disappointed in losing the World Series,” Strom said of Houston’s defeat in six games to the Atlanta Braves.

The Astros planned to leave the retractable roof at Minute Maid Park open for Tuesday night’s game but announced about an hour before first pitch that it would be closed as usual because of “temperatures trending warmer than anticipated.”

The temperature at first pitch was announced as 85 degrees. The roof is rarely open during games because of the extreme heat in Houston.

Diamondbacks: OF Jake McCarthy was reinstated from the bereavement list and OF Alek Thomas was optioned to Triple-A Reno Tuesday.

Astros: Baker said McCullers stayed home Tuesday and did not come to the ballpark. He added that he was not sure when his next start would be.