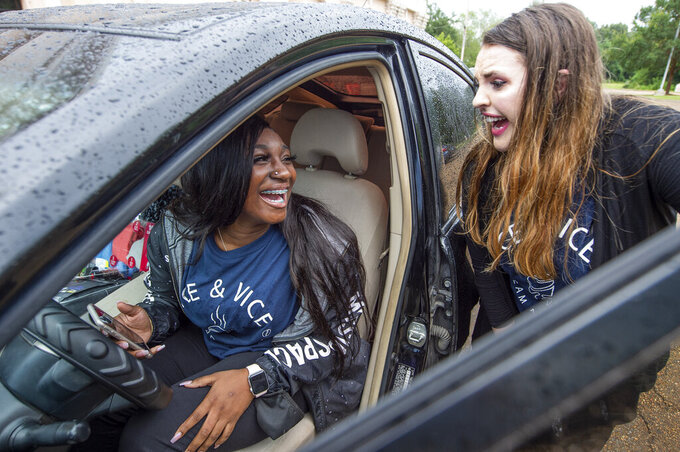 Barbara Gauntt, ASSOCIATED PRESS
Sirayah Miller, left, smiles while sitting behind the wheel of her new car, as she talks with Sarah Dale Harmon, right, co-owner of Ice & Vice frozen treat shop in Madison, Miss., Friday, Aug. 20, 2021. Miller, who has aged-out of foster care, is the first recipient of a transportation scholarship offered to employees of Ice & Vice. (Barbara Gauntt/The Clarion-Ledger via AP)

Surrounding her was a small group of women, including Sarah Dale Harmon, a longtime foster parent. Just around the corner sat a black Toyota Prius adorned with a red bow and a fresh paint job, new tires and a new radio.

Right before Miller opened her eyes, Harmon took her hands and shared how proud she was of Miller.

“You’re loved by a lot of people, especially me,” Harmon said.

Miller squealed when she opened her eyes and saw the new (used) car, a reward for the former foster child’s hard work and determination to not allow circumstances to dictate her life.

The Prius, the 18-year-old’s first car, will provide her transportation from home to her job at Ice & Vice ice cream shop in Madison and to Holmes Community College, where she is earning an associate’s degree in social work. Miller hopes to some day help others in the foster care system.

“Kids that go through the system and experience what I’ve experience, I don’t want nobody to ever experience that,” Miller said. “I want to give back to the community.”

Sarah Dale and Justin Harmon had never thought about owning a business — let alone an ice cream shop — but they knew they wanted to help foster youth.

When an opportunity to mold a business into an environment for supporting foster children through jobs and teaching life skills, the Mississippi couple grabbed it.

When Sarah Dale Harmon learned that the Orange Leaf, 1022 U.S. Highway 51, was for sale, she and her husband met with the owner and bought the shop, then performed renovations and renamed it Ice & Vice. The store serves frozen yogurt, gelato and coffee. Caffeine is the “vice.”

Since opening in February, the Harmons have prioritized hiring young people in the foster care system, but Sarah Dale Harmon said they also have employees not connected to the system.

“One of the things I’ve realized is even with the kids that aren’t in foster care, they all have their own struggles, you know, at home or with family,” she said. “It’s an environment where the kids aren’t ashamed to talk to each other about the reality of things.”

Employees are often given chances to learn from their mistakes, the owners take on a mentorship role and everyone is treated as family.

Ice & Vice has started a transportation scholarship to raise money throughout the year to provide an employee with a car.

“When she first started at the store, she was a little quiet, she had a hard time interacting with the customers,” Harmon said.

Affectionately called Riyah by others, when the former foster teen began working at Ice & Vice almost seven months ago she was still processing events that occurred while in the foster care system for two years.

Miller, originally from Hattiesburg, said she and her three sisters entered the foster care system in Jackson in 2020 when child protective services became involved with her family after they were evicted from an apartment.

Miller said her mother moved them to Jackson in 2019 after she left her abusive husband, Miller’s stepfather.

Miller said it was then that the four sisters began moving around a lot — first staying in hotel rooms, then sleeping on the floors at the homes of strangers before being shuffled between the homes of family members.

In June 2020, Miller was placed in child protective custody and was living at Sunnybrook Children’s Home in Ridgeland, where she said she was promised a caring environment.

To her, the staff’s treatment of those in their care seemed controlling. She said it seemed like they were not aware of the trauma the kids had been through prior to being placed there.

When Miller met Harmon for the first time and learned about Ice & Vice, things began to look up for the teen.

“God gave me Ms. Sarah and she changed my life around,” Miller said as she held back tears. “And it was like, she was willing to help me with so much and I thank her every day, because I wouldn’t be in this position, I wouldn’t have the mind that I do now if I (had) stayed at Sunnybrook.”

Harmon said she feels like she’s known Miller for years, even though it’s just been a few months. In that time, Harmon said the teen has opened up while learning to take responsibility for her actions.

Miller has learned to accept constructive criticism and take it in as a way to learn from mistakes. Miller said working at the store has given her an opportunity to find her voice.

“It felt like I was wanted back in life, like I can do something with my life,” she said. “When she told me that my opinion mattered, all that type of stuff, I just felt like it was home for me.”

Miller’s personal growth, her initiative in taking a financial literacy class with Mississippi Youth Voice, graduating from Ridgeland High School early and being accepted to college were some of the reasons why the Harmons chose her as the first transportation scholarship winner.

“Kids that go through the system and experience what I’ve experienced, I don’t want nobody to ever experience that,” Miller said. “I want to give back to the community.”