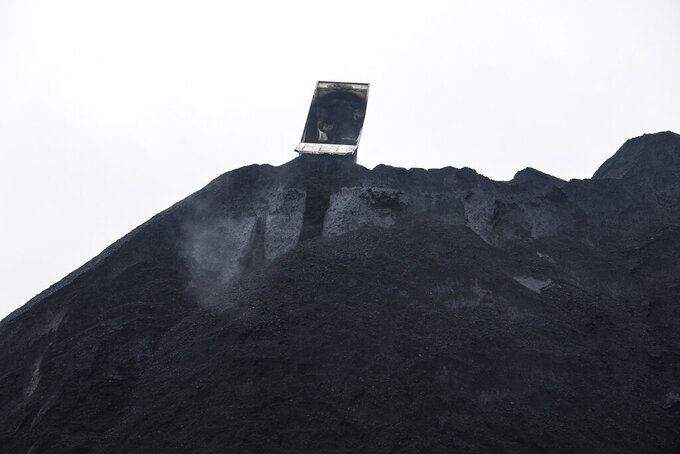 Jean-Francois Badias, ASSOCIATED PRESS
A heap of coal is pictured at the coal-fired power station Tuesday, Nov. 29, 2022 in Saint-Avold, eastern France. The plant should have been closed permanently at the end of last winter, but the government resumed its operation due to the energy crisis. (AP Photo/Jean-Francois Badias)

SAINT-AVOLD, France (AP) — The end of France’s coal era seemed so certain last year that the operator of one of the country’s last coal-burning plants posted an upbeat educational video on YouTube titled “Let’s visit a coal plant that's going to be destroyed!”

The plant in the northeastern town of Saint-Avold indeed halted coal production as scheduled earlier this year — but not for long. This week, its workers were back at the controls, transporting coal from storage heaps and refiring furnaces, as part of emergency efforts to keep the heat and electricity on this winter.

The energy crisis across Europe unleashed by Russia’s war in Ukraine has paved the way for coal’s comeback in some regions, to the dismay of politicians and activists who warn this endangers climate goals, the climate itself and public health.

“Working here we know the negative impact of the coal plant, but nonetheless we see it as a necessary evil," said shift supervisor Thomas About at the Emile-Huchet Power Plant in Saint-Avold.

“Given the current state of the electrical network, I nonetheless fear greatly that this production tool is necessary in the medium term," he told The Associated Press.

Nearby, wheel loaders scooped mounds of coal and dumped it onto conveyor belts, and gray fumes rose from the plant's smokestacks.

In France the return to coal is surprising because the country started phasing it out decades ago and relies heavily on nuclear power instead. But this year, on top of Russia largely cutting off natural gas to Europe, nearly half of France’s nuclear reactors shut down for maintenance or corrosion and other problems.

Facing a worst-case scenario of rolling power cuts to households, the government issued a decree in September to allow Saint-Avold to start again and continued activity at another coal plant in western France, citing the “exceptional” and “unforeseeable” context of energy supply challenges.

President Emmanuel Macron had initially vowed to close all coal-burning plants in the country by the end of this year due to climate-related concerns.

The impact of the backtrack will largely be felt locally, since coal plays only a minor role in France's energy mix nationwide. The two coal plants produced a maximum of 3% of France's electricity Tuesday, according to the national grid operator, compared to some 60% from nuclear plants.

The government has called on the French for a 10% reduction in energy use in the coming months, including by limiting heating, to avoid the risk of rationing and cuts this winter. Government spokesperson Olivier Veran said Wednesday that people reduced on average their electricity consumption by 5% in October.

The government insists the return to coal will be temporary.

The company that operates the Saint-Avold plant, GazelEnergie, is continuing its work to transition the site to the “post-coal” future, with projects for biomass and hydrogen-based energy.