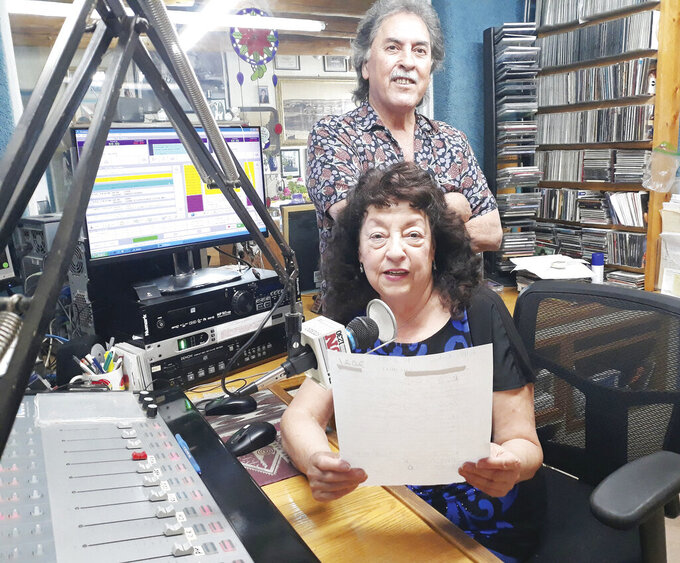 Gwen Albers, ASSOCIATED PRESS
Joseph and Loretta Baca, owners of KFUN-AM and KLVF-FM, pose their radio studio Tuesday, Oct. 12, 2021, in Las Vegas, N.M. The Bacas have put the radio stations on the market so they can retire. (Gwen Albers/The Daily Optic via AP)

After 42 years of first working and then owning KFUN-AM and KLVF-FM radio stations, the Bacas are ready to sign off. Loretta Baca will turn 75 this Saturday and her husband of 53 years will celebrate his 75th birthday on Oct. 29, the Las Vegas Optic reported.

“The station has been good to us,” Joseph Baca said. “It was a big risk and a big commitment, but owning the station was my dream.”

“I guess I forced Loretta into it,” he joked.

“We have always worked together and we live together (so we are with each other) 24/7,” Loretta Baca added.

The Bacas had planned for their sons Mike, 51, and J.R., 46, to take over the business. Mike Baca, however, has suffered with brain tumors resulting in five brain surgeries. J.R. Baca didn’t want to go into the business alone. The couple’s daughter Annette, 50, also wasn’t interested.

As for Loretta and Joseph Baca, they knew each other from West Las Vegas High School, graduating in 1965 and 1966, respectively. The couple began dating after meeting up at the Blue Light City teen dance club.

They married on Feb. 25, 1968 and lived in Tucson, Albuquerque and Seattle before returning to Las Vegas in the mid-1970s with their three children.

She got a job at First National Bank and he was hired at KNMX-AM in Las Vegas. About 18 months later, Joseph Baca began working at KFUN as a disc jockey, program director and in sales. Loretta Baca joined her husband as the office manager.

“I love radio, but I never liked working for someone else,” said Joseph Baca, a former Las Vegas City Councilor. “For 20 years, I would come in to open and say ‘good morning KFUN, I love you and want to own you one of these days.’”

After the former owner sold the station, Joseph thought he’d lost his dream.

“Loretta said ‘don’t give up on your dream,’” he said.

The new owner named Joseph Baca the manager, which turned into 15-hour days. To ease the workload, Loretta Baca joined the station. The couple eventually had the opportunity to buy KFUN.

When given the chance to buy KLVF, the couple was in the midst of arranging the $1.2 million financing when Joseph Baca remembered to buy a lottery ticket.

“It was a Friday night. I had gone home and was watching the news and looked at the clock,” he said. “I’d forgotten to buy a Powerball ticket. I grabbed a Hawaiian shirt, drove to the station and went home forgetting about the ticket.”

Three days later, he returned to the store and asked the clerk to check his ticket.

They hope to find a buyer who will continue caring about the community because turning off the lights isn’t an option.

“There is no way we will shut it down,” Loretta Baca said. “The history behind the station and the people still alive are a part of KFUN. I think more than anything it would be like closing a part of history.”