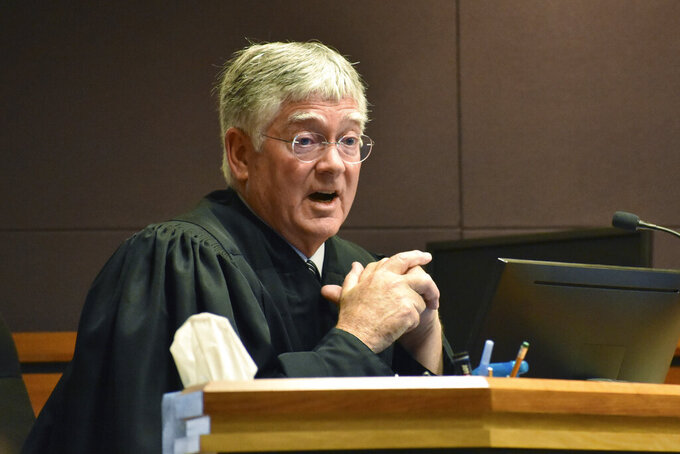 BILLINGS, Mont. (AP) — A Montana judge struck down as unconstitutional three laws that restricted voting in the state, saying there was no evidence of the widespread voter fraud that the 2021 Republican-sponsored laws ostensibly were targeting.

The laws ended same-day voter registration, imposed new identification requirements on students and restricted third-party ballot collections. The restrictions were put on hold in April under a temporary injunction later upheld by the Montana Supreme Court.

Election officials declined to say if they would appeal the latest ruling to the state high court. And with the election just over a month away, it's uncertain if justices would render a decision before Nov. 8.

Native American tribes that sued over the laws argued the student ID and ballot collection measures would hurt voters on remote reservations, where many people live far from polling places and are dealing with poverty and other challenges.

Montana Secretary of State Christi Jacobsen, who oversees elections in the state, requested the voting measures last year as Republicans around the country changed voting laws in the wake of the November 2020 election. The moves followed claims made by former President Donald Trump and parroted by his supporters that the election was stolen.

Judge Michael Moses said that the sponsors of the laws showed no proof that voter fraud was a problem following an August trial in which experts and voting officials from across the state testified.

“Voter fraud in Montana is vanishingly rare," Moses wrote in his nearly 200-page Friday ruling. He added that there were “significant signs” that the ballot collection law had a discriminatory purpose against Native American voters, and said the student ID law had been enacted by Republican lawmakers “to reduce voting by young people for perceived political benefit.”

Jacobsen's own witnesses agreed during the trial that voter fraud wasn't a problem in Montana.

A spokesperson for the Republican secretary of state declined to say Monday if she planned to appeal the judge's ruling to the Supreme Court. But Jacobsen is “not going to let down the fight” to make Montana elections secure and accessible, spokesperson Richie Melby said.

If the laws were allowed to stand, they would directly impede the ability of many Native American to vote, said Jacqueline De León with the Native American Rights Fund, representing the Blackfeet Nation, Confederated Salish and Kootenai Tribes, Fort Belknap Indian Community, the Northern Cheyenne Tribe and native advocacy groups.

She said allowing third parties to pick up and deliver some voters' ballots was crucial for Native Americans unable to get to polling places because of poverty and a lack of transportation.

“These laws exploit the structural deficiencies in Native American communities, and the Legislature knew what the impact would be," De Leon said.

An audit by a previous Republican secretary of state found no problems in Montana during the 2020 election, according to court filings. The conservative Heritage Foundation found just one voter fraud conviction out of millions of votes spanning the past four decades in the state.

The Montana Democratic Party and youth groups also challenged the 2021 laws and argued tthat they were meant to make it more difficult for Native Americans, new voters, the elderly and those with disabilities to vote.

Moses has also declared unconstitutional a law that would not have allowed 17-year-olds who pre-register to vote to receive a ballot, through the mail or otherwise, until they turn 18, even if they would turn 18 on or before Election Day.