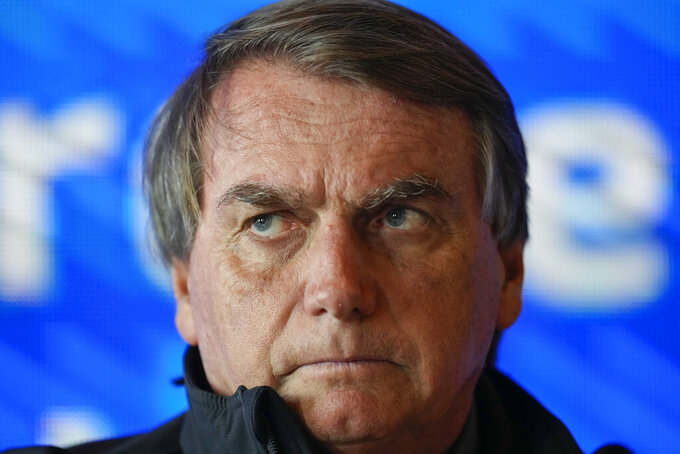 Andre Penner, ASSOCIATED PRESS
Brazil's President Jair Bolsonaro gives a press conference after meeting with Elon Musk in Porto Feliz, Brazil, Friday, May 20, 2022. Musk, the Telsa and SpaceX chief executive officer, tweeted that he was in Brazil to help bring Internet service to rural schools in the Amazon and to help monitor the Amazon environmentally. (AP Photo/Andre Penner)

BRASILIA, Brazil (AP) — Brazilian President Jair Bolsonaro has decided to attend the Summit of the Americas in Los Angeles next month and plans to meet with U.S. President Joe Biden, close allies of the South American leader said late Wednesday.

Three of Bolsonaro's Cabinet ministers confirmed Bolsonaro's decision to The Associated Press, following weeks during which his attendance remained a question, with some media reporting he had ruled it out.

The Brazilian officials, who spoke on condition of anonymity because they weren't authorized to speak publicly, said the bilateral meeting with Biden has been confirmed.

The press office of the U.S. Embassy in Brasilia declined to comment.

A bilateral meeting in Los Angeles would be a first for the U.S. and Brazilian leaders.

The summit, which the United States is hosting for the first time since the inaugural event in 1994, has risked collapsing over concerns about the guest list, with several leaders in the region threatening not to attend.

In addition to Bolsonaro, the most notable possible no-show has been Mexican President Andrés Manuel López Obrador, who has threatened to boycott if Cuba, Venezuela and Nicaragua aren’t included. López Obrador told reporters at his daily news conference Wednesday that the possibility of the trip was still under discussion.

Bolsonaro, an ally of former President Donald Trump, was among the world's last heads-of-state to recognize Biden's 2020 electoral victory.

After Biden took office, Bolsonaro's administration made an effort to demonstrate renewed commitment to reining in deforestation of the Amazon rainforest, including stepping up its pledges at the U.N. climate talks in Glasgow. But bilateral talks fell apart as data showed destruction was continuing.