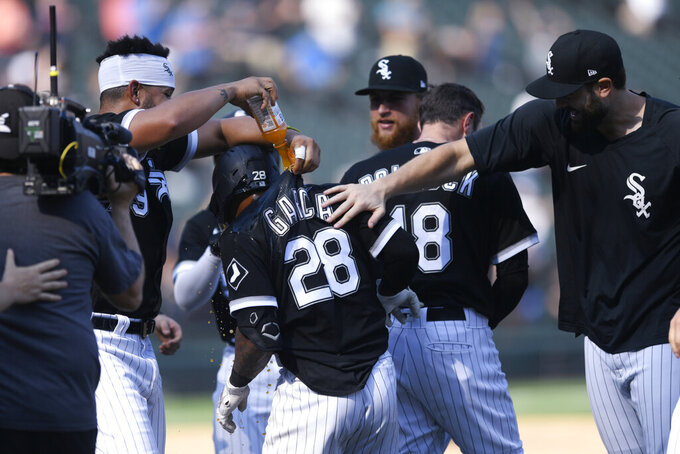 Paul Beaty, ASSOCIATED PRESS
Chicago White Sox's Leury Garcia (28) is congratulated by teammates after he drove in the winning run in the 10th inning against the Minnesota Twins in a baseball game Wednesday, July 6, 2022, in Chicago. (AP Photo/Paul Beaty)

CHICAGO (AP) — Andrew Vaughn tied the game with a two-run homer in the eighth inning, and Leury Garcia hit a game-ending single in the 10th to give the Chicago White Sox a 9-8 victory over the Minnesota Twins on Wednesday.

The White Sox trailed five times in the game and tied it each time before taking their first and only lead in extra innings to avoid a three-game sweep. Chicago snapped a seven-game losing streak to the AL Central-leading Twins.

“I was dancing in the locker room,” White Sox manager Tony La Russa said. “Pulled something, too.”

Playing his first game since April 23, Eloy Jiménez made an immediate impact for the White Sox, hitting a two-run homer in the fourth inning that tied the game 3-all and an RBI single in the seventh that made it 6-6. Jiménez had been sidelined with a torn tendon in his left hamstring. He also made a difficult catch before running into the netting down the left-field line to end the sixth.

Jose Ruiz (1-0) walked Jose Miranda to start the 10th but got out of trouble with an inning-ending double play.

In the bottom of the inning, automatic runner Adam Engel advanced to third on a passed ball by catcher Ryan Jeffers as Josh Harrison walked. Engel scored on Garcia’s hit off Jovani Moran (0-1).

“Unfortunately, things haven’t gone our way for most of the season, but we haven’t stopped working,” Garcia said. “We’ve been working hard, and today was a good day for us.”

Vaughn hit his game-tying homer off reliever Trevor Megill with two out in the eighth, and he robbed Gilberto Celestino of a hit by making a leaping catch at first base in the ninth.

Luis Arraez had four hits for the Twins, extending his hitting streak against the White Sox to 15 games. Arraez is batting .441 (26 for 59) during those contests.

Gio Urshela put the Twins ahead 8-6 in the eighth with a two-run homer off Matt Foster.

Luis Robert hit a two-run homer in the fifth for Chicago.

Polanco had the fifth multi-homer game of his career and first since Sept. 11, 2021, hitting a two-run shot in the fifth off Lance Lynn and a solo drive in the seventh off Kendall Graveman.

White Sox designated hitter Jose Abreu extended his hitting streak to 11 games with an RBI double in the first.

White Sox 3B Yoan Moncada left after six innings because of a right foot bruise. X-rays were negative, and he was listed as day-to-day.

The Twins will send RHP Sonny Gray (4-1, 2.47 ERA) to the mound Friday night in the opener of a three-game series at Texas.

The White Sox welcome Detroit for a three-game series starting Thursday night with RHP Dylan Cease (7-3, 2.51) on the mound. Cease is 10-0 with a 1.91 ERA in 11 career starts against the Tigers.