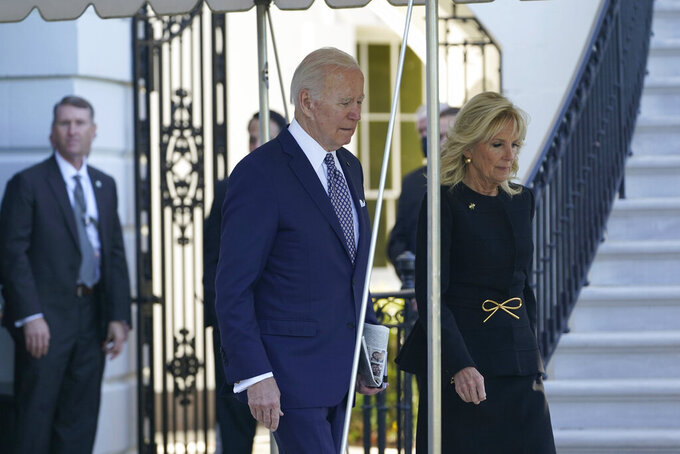 Susan Walsh, ASSOCIATED PRESS
President Joe Biden and first lady Jill Biden walk towards Marine One on the South Lawn of the White House in Washington, Tuesday, May 17, 2022, as they travel to Buffalo, N.Y., to pay their respects to the lives lost in Saturday's shooting. (AP Photo/Susan Walsh)

WASHINGTON (AP) — President Joe Biden will host Prime Minister Magdalena Andersson of Sweden and President Sauli Niinistö of Finland at the White House for a meeting Thursday amid their push to join NATO in the wake of Russia's invasion of Ukraine.

The White House said they would discuss the two countries’ applications to join the mutual defense alliance, as well as European security broadly. The requests by the long-neutral nations to join NATO have been widely lauded within the alliance as a rebuke of Russia after its invasion of Ukraine, though Turkey has expressed reservations.

Turkish Foreign Minister Mevlüt Çavuşoğlu told reporters in Berlin that Finland and Sweden had also imposed restrictions on defense sales to Turkey that were “unacceptable.”

But NATO Secretary-General Jens Stoltenberg said his understanding is that Turkey wants to have its concerns over Finland and Sweden addressed but does not intend to block their membership.

Nonetheless, Turkey’s raising of its grievances has led to concerns in Washington and Brussels that other NATO members might also use the admission process as a way to wring concessions from allies, possibly complicating and delaying accession.

Secretary of State Antony Blinken, who has spoken with Çavuşoğlu, will see him again on the margins of a special U.N. Security Council meeting on Wednesday in New York. He has voiced optimism that all NATO members would support bids from Finland and Sweden.

White House press secretary Karine Jean-Pierre said Tuesday that the administration is “very confident” that an agreement would be reached for the two countries to join the alliance.

Thursday's White House meeting between Biden and the two leaders is set to take place before Biden departs Washington for a four-day trip to South Korea and Japan.