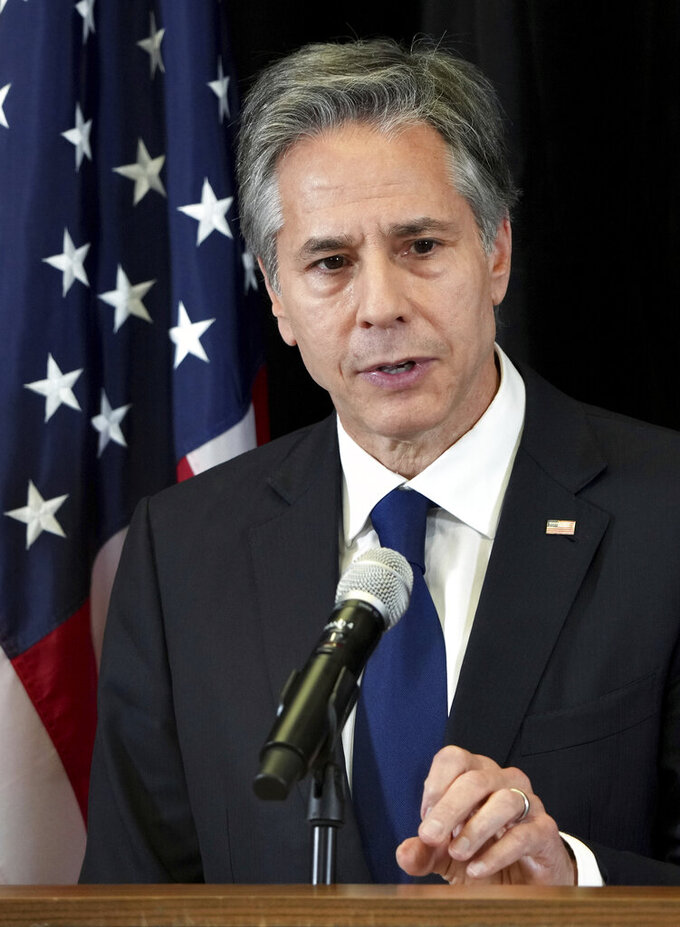 Michael Sohn, ASSOCIATED PRESS
FILE - US Secretary of State Anthony Blinken addresses the media during a press conference in Berlin, Germany, Friday, June 24, 2022. Blinken will hold talks with his Chinese counterpart this week in Indonesia at a meeting of foreign ministers from the Group of 20 bloc of nations, the State Department said Tuesday, July 5. (AP Photo/Michael Sohn, File)

WASHINGTON (AP) — Secretary of State Antony Blinken will see his Chinese counterpart this week at a meeting of foreign ministers from the Group of 20 bloc of nations that will likely exacerbate splits over Russia’s war in Ukraine.

While strained U.S.-China ties will be the focus of Blinken’s talks with Chinese Foreign Minister Wang Yi, the broader G-20 gathering in Indonesia of leading industrialized nations will almost certainly be overshadowed by the Ukraine conflict and its effect on global food and energy security. And Russian Foreign Minister Sergey Lavrov will be there, marking the first time he and Blinken will be in the same room, let alone the same city, at the same time in nearly six months.

The State Department announced Tuesday that Blinken would meet with Wang in Bali, but had little to say about the possibility of him seeing Lavrov, whom the U.S. has shunned since the Ukraine invasion in February. U.S. officials have accused Lavrov and other Russian diplomats of a lack of seriousness in the run-up to the Ukraine war.

The Biden administration has ruled out “business as usual” with Russia while it remains in Ukraine and U.S. officials said there would be no formal discussions between Blinken and Lavrov in Bali. But they could not rule out the possibility of a chance encounter, which would their first since they last met in Geneva in January.

"The secretary intends to engage fully in the G-20. I’m not going to speak to any plans on the part of Foreign Minister Lavrov ... but I can tell you the secretary will be a full and active participant in the G-20, which we see as a valuable forum," State Department spokesman Ned Price told reporters.

Like many recent international diplomatic gatherings, the Bali meeting will be focused on Ukraine as the participants set the stage for a summit of G-20 leaders, also to be held in Indonesia, in November. But unlike, the Western-dominated G-7 and NATO summits that were held in Europe last week, the G-20 will have a different flavor.

China and many other participants, including India, South Africa, Brazil and several other large developing nations, have resisted signing onto U.S. and European opposition to Russia’s invasion. Some have outright refused Western entreaties to join condemnations of the conflict, which the U.S. and its allies see as an outright attack on the international rules-based order that has prevailed since the end of World War II.

The divergence has set the stage for a potentially contentious preparatory meeting ahead of November's summit, amid questions about whether Russian President Vladimir Putin will attend. The U.S. has made clear it does not believe Putin should attend but has urged the Indonesian hosts to invite Ukrainian President Volodymr Zelenskyy should the Russian leader participate.

In the meantime, the U.S. and China are separately at severe odds over numerous issues ranging from trade and human rights to Taiwan and disputes in the South China Sea.

Blinken's meeting with Wang was announced after China’s envoy to trade war talks with Washington expressed concern about U.S. tariffs on Chinese imports in a call with with Treasury Secretary Janet Yellen. Neither side gave any indication that progress has been made on the matter.

In his meeting with Wang, Price said Blinken “will reinforce our commitment to working with international partners to confront global challenges, including food and energy insecurity and the threat Russia’s continued war against Ukraine presents to the international order.”

From Bali, Blinken will travel to Bangkok, Thailand, to make up for a trip to the Thai capital that he was forced to cancel late last year due to COVID-19 reasons.