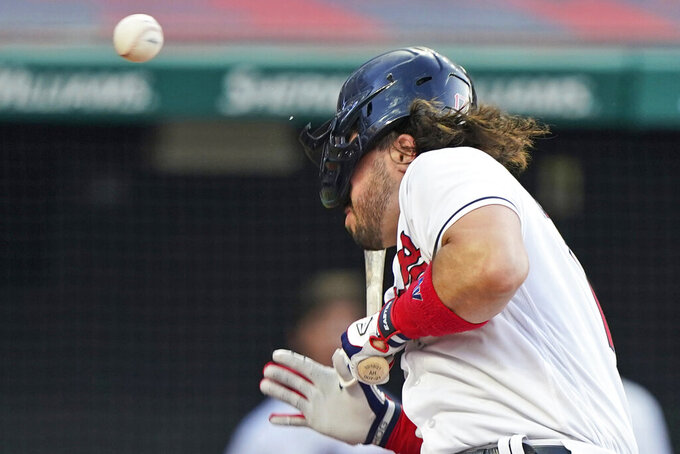 Tony Dejak, ASSOCIATED PRESS
Cleveland Indians' Austin Hedges is hit by a pitch during the third inning of the team's baseball game against the Seattle Mariners, Friday, June 11, 2021, in Cleveland. (AP Photo/Tony Dejak) 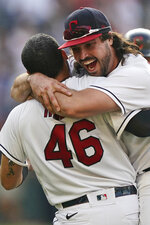 CLEVELAND (AP) — The Cleveland Indians placed catcher Austin Hedges on the 7-day concussion list prior to Thursday's game against Baltimore.

Hedges was hit on the mask by a foul tip Tuesday night and remained in the game. He was removed from Wednesday’s lineup about an hour before first pitch.

Hedges also was hit in the helmet by a pitch from Seattle’s Justin Dunn on Friday and was on the ground for several moments. He was able to go to first base but was taken out two innings later.

Hedges cleared the concussion tests and returned to the lineup Sunday. He’s batting .144 with three homers and seven RBIs in 35 games. Hedges took over as the Indians' No. 1 catcher after Roberto Pérez broke his right finger. Pérez hasn't played since May 3.

"Austin yesterday just didn't feel right," president of baseball operations Chris Antonetti said. "He had low energy and wasn't himself in how he felt. We got him assessed last night and he kind of felt OK. He came in again this morning and he feels better, but still not normal so we don't want to take any chances at all.”

The Indians purchased the contract of catcher Ryan Lavarnway from Triple-A Columbus and transferred outfielder Jordan Luplow to the 60-day IL. Luplow has been out with a sprained right ankle and won't be eligible to return until late July.