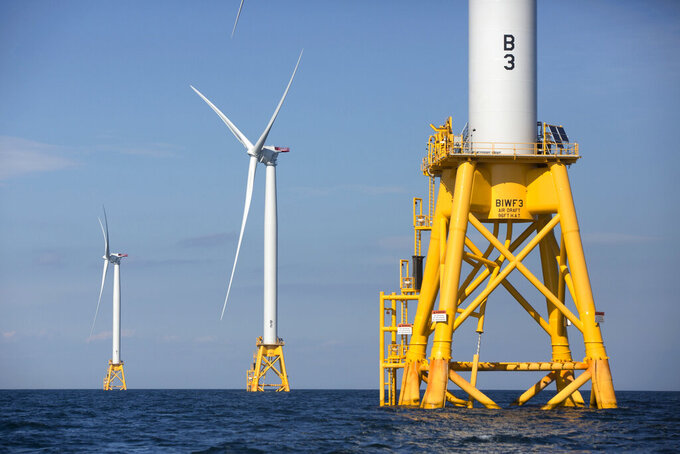 Michael Dwyer, ASSOCIATED PRESS
FILE - In this Aug. 15, 2016, file photo, three of Deepwater Wind's turbines stand in the water off Block Island, R.I. Massachusetts is poised to its next step in battling climate change. A landmark law signed by Mass. Gov. Charlie Baker in March 2021 has officially taken effect. A key goal of the new law is creating a net-zero greenhouse gas emission limit by 2050. The law also requires the creation of an additional 2,400 megawatts of offshore wind. (AP Photo/Michael Dwyer, File)

BOSTON (AP) — Massachusetts has turned a critical corner in its response to climate change.

Supporters say it’s now time to get down to the nitty-gritty of making sure the state meets the lofty goals of the law — like creating a net-zero greenhouse gas emission limit by 2050.

The law triggers an initial series of changes throughout 2021 and 2022, according to Democratic Sen. Mike Barrett, co-chair of the Committee on Telecommunication, Utilities and Energy.

Some of those initial steps may seem modest, even bureaucratic, but supporters say they're critical to helping the state transition to a renewable energy future.

One step calls for the state Department of Public Utilities to consider six factors as it decides electric power and natural gas rates, reviews electric and gas company contracts, and makes policy.

The law also requires the state energy efficiency initiative, Mass Save, to factor in a new goal — the “social value of greenhouse gas emission reductions” — into programs it creates for the three-year period 2022-2024.

The new goal means offering incentives for consumers to adopt technologies to reduce greenhouse gas emissions, like replacing an oil-burning furnace for an electric heat pump, Barrett said. It’s essentially the reverse of a carbon tax — a carrot instead of a stick.

The administration is working to put the law into effect.

The administration has also updated the state’s Environmental Justice Policy as required by the law with a new definition of "Environmental Justice Population” — typically lower-income communities facing greater health risks from pollution — and the process by which neighborhoods may be included under that policy.

The DPU’s mission statement has also been updated to reflect the goals of the law.

“The mission of the DPU is to ensure that consumers’ rights are protected, and that utility companies are providing the most reliable service at the lowest possible cost," the updated statement reads in part. “The DPU seeks to promote safety, security, reliability of service, affordability, equity, and greenhouse gas emission reductions.”

The new law includes additional steps, like incremental goals every five years to reach a 50% reduction in emissions by 2030, before meeting the 2050 goal.

The law would also: require an additional 2,400 megawatts of offshore wind; set appliance energy efficiency standards; create benchmarks for the adoption of clean energy technologies like electric vehicles, charging stations, solar technology and energy storage; and create an energy code to allow net-zero building construction for towns that want it.

While the new law takes a series of important steps, the state shouldn’t stop there, according to Ben Hellerstein, state director of Environment Massachusetts.

Advocates are pushing an even more ambitious goal of transitioning Massachusetts to 100% clean electricity by 2035 and 100% clean heating and transportation by 2045, noting that other states are already setting similarly ambitious benchmarks.

Former Democratic Rhode Island Gov. Gina Raimondo had signed an executive order making 2030 the target date for the state to completely transition to renewable energy sources. State lawmakers are weighing a bill that would write that goal into law.

It’s time for Massachusetts to "take a step further by pledging to phase out the use of fossil fuels for heating and transportation, too,” Hellerstein said.

The key to the Massachusetts law is constant vigilance to make sure the smaller, intermediate steps are met, Barrett said.

“Legislative oversight is going to be key here," he said. “We can’t let this get away from us.”