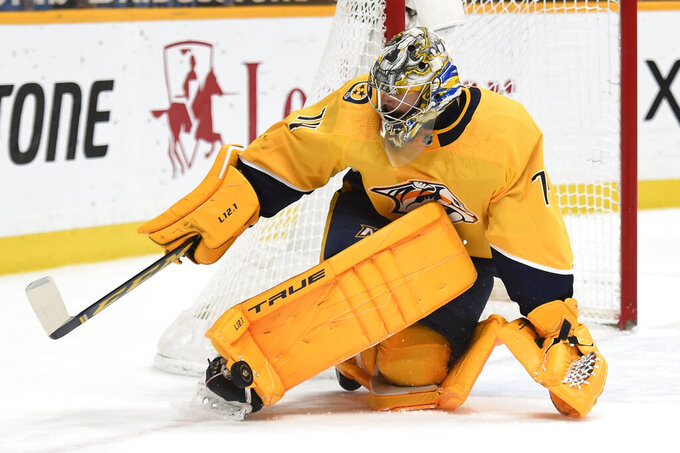 How long they stick around will depend on how well Saros keeps playing in net.

“You want to just play better for him because he’s been playing so good,” Predators forward Tanner Jeannot said of Saros. “It gives you confidence to know he’s going to make that save when you need it.”

The 26-year-old Finn has put together a season worthy of Vezina Trophy consideration and maybe even a few Hart Trophy votes. Saros, who posted a career-high 21 victories, was at his best since returning in the middle of March from an upper-body injury. He led the NHL over his last 23 games with a .945 save percentage and posted all three of his shutouts since March 23, second-most in the league in that span.

For the season among NHL goaltenders playing at least 25 games, Saros tied for second in save percentage (.927), tied for fifth with his three shutouts and fourth with a 2.28 goals-against average and sixth in wins. He led NHL goalies with a .942 even-strength save percentage.

Nashville coach John Hynes credits Saros with learning from 2018 Vezina Trophy winner Pekka Rinne on how to handle the mental preparation of being the No. 1 goalie. The 5-foot-11 Saros, who's 6 inches shorter than Rinne, also has grown into understanding how he needs to play in net.

“He is a very smart goalie," Hynes said. "I think he reads plays very well, he's positionally sound. You can see the way that he can find, at his size, through traffic and tips and screens, he does a good job of tracking the puck and that’s something that’s been really important to him.”

Saros did give up seven goals in back-to-back losses to Carolina in mid-April before holding the Hurricanes to just one goal May 8 as Nashville clinched the Central Division's No. 4 seed.

The top-seeded Hurricanes host Nashville on Monday night in Game 1, and defenseman Dougie Hamilton said he's heard how well Saros has played down the stretch.

“Everyone has good goalies at this point,” Hamilton said. "To win games, you need good goaltending. So we’re going to have to find ways to make it hard for him and see if we can do that and challenge him., and hopefully we can get some by him.”

Saros has plenty of company streaking into the NHL postseason:

The Edmonton captain is in a class by himself with a league-high 104 points in 55 games as the likely Hart Trophy winner as the NHL's MVP. The Oilers will be playing Winnipeg in their first-round series, the team McDavid had the most points against this season with 22 in nine games played.

Kirill Kaprizov not only is the top scoring rookie in the NHL, he’s also Minnesota’s hottest player as the Wild look to win their first playoff series since 2015.

He had a career-best six-game point streak with five goals and five assists snapped in a loss to St. Louis on Wednesday night. He also just posted a four-game, multi-point streak that’s the longest by a rookie in franchise history. He has 16 points (11 goals, 5 assists) in his last 13 games.

Carolina center Sebastian Aho ranked second only to McDavid and Brad Marchand for most points since April 6 with 24. He also had a nine-game point streak that ended May 4, and now he goes into the postseason without a point in three straight games.

Since acquiring Taylor Hall at the NHL trade deadline, the Boston Bruins have been the league's hottest team going 12-4-1. They're 15-6-2 over their last 23 games.

Pittsburgh has won eight of its last 10 going into its first-round series with the New York Islanders.

And Presidents' Trophy winner Colorado now has home-ice advantage through the playoffs. The Avalanche have won nine straight at home and are 16-0-1 over their last 17 games, matching the franchise record for longest home point streak set in 2002-03.

Toronto, which opens its first-round series with Montreal on Thursday, has won four straight at home.

SOMETHING HAS TO GIVE

The Florida Panthers enter the postseason on the NHL's longest active winning streak (six games). They also enter on the longest active streak without a series win (25 years).

Florida’s only three series wins came during its run to the Stanley Cup Final in 1996. They were swept by Colorado in that series, one where Joel Quenneville was an assistant coach for the Avalanche. He’s now coaching the Panthers, trying to end the drought .

Florida lost first-round series in 1997, 2000, 2012 and 2016, then lost to the New York Islanders in the preliminary round during the season restart last summer.