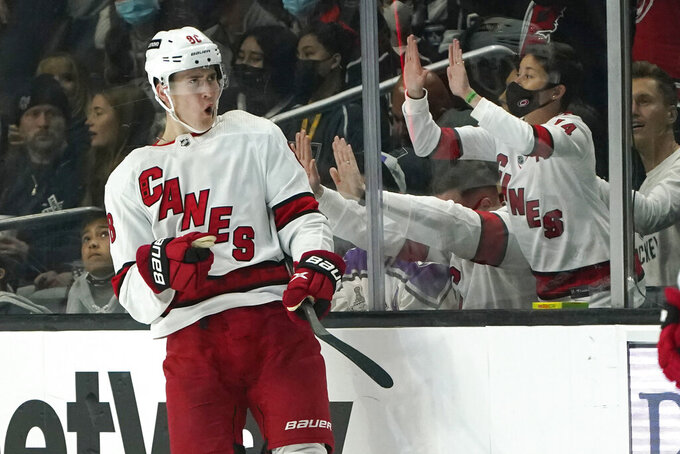 LOS ANGELES (AP) — Martin Necas scored and Seth Jarvis had a goal for the third straight game in the Carolina Hurricanes' 5-4 win over the Los Angeles Kings on Saturday.

Sebastian Aho and Derek Stepan each had a goal and an assist to help the Hurricanes to their fourth victory in a row. Frederik Andersen made 38 saves and had an assist.

“Really, at the end of the day, that was just a bad game for us, like, really bad," Carolina coach Rod Brind'Amour said. "Give the other team a lot of credit, they played hard and the way they would want to play. We just never got going. We’re fortunate to get that one.”

“It was a little too loose for us," Los Angeles center Blake Lizotte said. “Kind of race-horse hockey, trading chances back and forth, and that’s not typically our identity.”

Transition offense was the Hurricanes’ strength throughout the game, and it finally gave them a lead they were able to protect in the second period when Necas put them up 5-4 with 34 seconds left. He worked around defenseman Mikey Anderson to skate across the crease and beat Petersen at the far post.

From there, Carolina got a masterful third period from Andersen, who stopped all 20 shots he faced.

“It’s just what Freddy does," Aho said. "Probably wasn’t the easiest game for him either because they had quite a bit of chances and a few goals there too. But in the third there, he was huge for us and gave us a chance to win, and that’s all you can ask for from a goalie.”

Carolina took the lead twice in the first period, only for Los Angeles to respond.

The Hurricanes went in front 3 minutes into the first period when Jarvis scored off the rush, but the Kings tied it up at 1 when Lizotte fired through traffic from the left circle at 4:38.

Stepan needed just 10 seconds to reclaim the advantage at 2-1, with Brady Skjei’s shot from the blue line taking two deflections before going in. Kempe tipped Alex Edler’s shot from the point in to make it 2-all at 12:39.

The give-and-take continued in the second period, with the Hurricanes again going in front twice. Aho’s eighth goal of the season to go up 3-2 at 6:16 was canceled out by Kempe’s shorthanded breakaway at 9:33.

Jesperi Kotkaniemi scored on a backhand with nine minutes left in the period to give Carolina a 4-3 edge, but Brendan Lemieux was able to sweep Matt Roy’s rebound in with two minutes left.

“That's not necessarily the style we want to play,” Lizotte said. “I think our team is built to win more of a 3-2 type style, tight checking game.”

Jarvis became the fourth teenager in franchise history to score in three consecutive games, and Brind'Amour indicated the 13th overall pick in the 2020 NHL draft will remain with the team going forward. Jarvis' three-year entry-level contract will start if he plays in another game for the Hurricanes this season.

“It’s a lot of fun," Aho said of playing with Jarvis. "He’s a good kid, he can really skate and a smart player, so it’s fun to play with him. Just try to find him and, obviously, he can score.”

NOTES: Necas has one goal and three assists during a three-game point streak. … Kempe scored the first shorthanded goal allowed by Carolina this season. ... Kings D Drew Doughty was a limited participant in practice Friday, his first on-ice work with the team since sustaining a knee contusion against Dallas on Oct. 22. Coach Todd McLellan said Doughty, who was initially expected to miss two months, won’t be returning just yet.