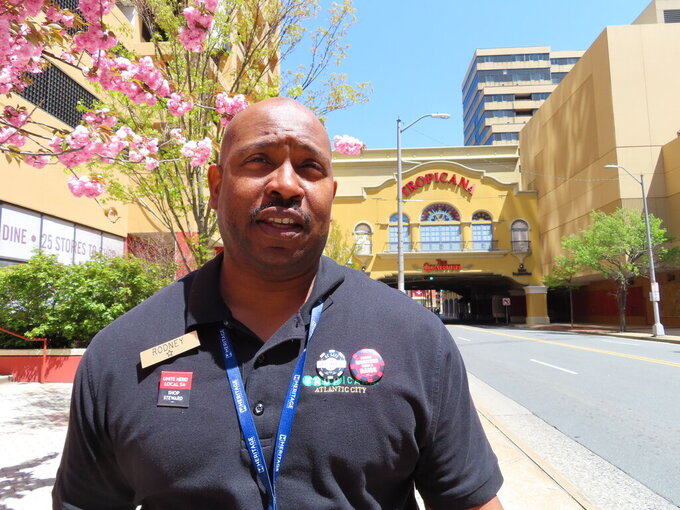 Wayne Parry, ASSOCIATED PRESS
Rodney Mills, a housekeeper at the Tropicana Casino in Atlantic City, N.J., discusses contract talks in front of the casino on April 29, 2022. Mills, a single parent of three children, says raises are needed for workers "across the board." (AP Photo/Wayne Parry)

ATLANTIC CITY, N.J. (AP) — As Atlantic City’s casinos work to recover financially from the coronavirus pandemic, the workers who keep those casinos operating are trying to do the same.

The main union representing casino workers in Atlantic City tells The Associated Press it is seeking “significant” wage increases in talks that are currently under way.

The goal is to keep workers from falling behind in an economy where labor shortages are increasing salaries in other industries, yet inflation is eating away at consumers’ purchasing power.

Existing contracts with eight of the nine casinos expire on May 31; the Ocean Casino Resort has been working without a union contract but has been adhering to its terms.

Bob McDevitt, president of Local 54 of the Unite Here union, said that casino workers - like their employers — are looking improve their finances in the third year of the pandemic.

“It is our intention to move our workers more firmly into the middle class,” he said. Union workers began wearing buttons on their uniforms last week that say “Casino Workers Need A Raise.”

Bethany Holmes, a spokeswoman for the union, said it hasn’t signed a new contract with casinos in Las Vegas during the last two years.

The union wouldn’t say how much of an increase it is seeking. But McDevitt said it needs to be enough to allow workers not only to keep pace with rising expenses, but to gain some ground and improve their situations.

Janey Negron, a bartender at the Tropicana for 22 years, has five children and takes care of her mother as well.

“The wages are not what they should be,” said Negron, who lives in Egg Harbor Township, near Atlantic City. "Everything is going up: gas, food, rent. Health care costs alone for my mom and kids are going way up. It's not like (the casinos) can't do it. They're making money, and we kept them going through the pandemic. They should compensate us for that.”

Rodney Mills is a housekeeper at Tropicana, where he has worked for 30 years. He is a single parent of children ages 3, 5 and 7 following the death of their mother last September, and is relying on his parents for help.

“I don't have a vehicle or a house — two things I need to bring stability to my family,” Mills said. “Raises have to happen across the board.”

Actually, they already are at many casinos. McDevitt, the union president, acknowledged many casinos have unilaterally increased pay for workers beyond the levels specified in existing contracts; those extra payments average about 10% more than called for under the contract.

Among them was Hard Rock.

“We just gave our employees raises before negotiations,” said Joe Lupo, Hard Rock's president. He said his casino and others realize higher wages are needed to attract new employees and retain existing ones.

Bill Callahan, general manager of the Ocean Casino, said he is “hopeful to have a ratified agreement in the upcoming days” that will result in wage increases for many employees.

Executives of four other casinos did not respond to requests for comment.

The union also plans to address what it says is a shortage of key workers at the casino resorts, including housekeepers, a job that McDevitt said has at least 500 openings in the city.

The emphasis on higher wages represents a switch for the union, which over the decades has prioritized comprehensive health insurance and pensions over big pay raises, McDevitt said.

He said the casino industry is showing strength in the third year of the pandemic, aided by strong performances in the internet gambling and sports betting industries. Last year, according to the state Division of Gaming Enforcement, the casinos won over $4.2 billion in combined casino, online and sports betting revenue.

But casino executives have long said the online and sports betting revenue streams are not what they seem because the casinos only keep about 30% of that money, with the rest going to third-party providers.

They argue that money won from in-person gamblers on their premises is a truer indication of the health of the industry. Last year's in-person revenue figure was $2.5 billion, which is below the level of 2019, before the pandemic hit.

McDevitt said he is optimistic that new contracts can be reached quickly with the casinos, and Lupo echoed McDevitt's assessment of the working relationship between the union and the casinos as a positive one.