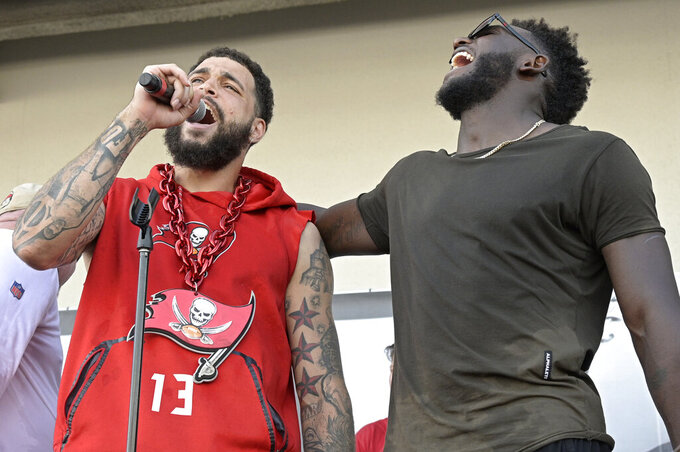 TAMPA, Fla. (AP) — The Tampa Bay Buccaneers placed the franchise tag on wide receiver Chris Godwin and agreed to a two-year deal with linebacker Lavonte David, the first steps in what the Super Bowl champions hope will be a successful bid to keep a star-studded roster intact to help Tom Brady pursue an eighth NFL title.

The 25-year-old Godwin earned $2.13 million in 2020 while ranking second to Mike Evans on the team with 65 receptions for 840 yards and seven touchdowns in 12 games. He stands to make about $16.4 million under the franchise tag next season.

David, meanwhile, agreed to a two-year contract worth up to $25 million, a person familiar with the deal told The Associated Press.

The person spoke on the condition of anonymity Tuesday because the deal had not been announced.

David, who turned 31 in January, was set to become a free agent after nine pro seasons, all with the Bucs. He’s a long-time captain and generally regarded as the heart of a defense that’s ranked first against the run each of the past two seasons.

While ensuring Godwin returns for a fifth season was the team’s top priority entering free agency, Tuesday’s moves were just the beginning of what general manager Jason Licht and coach Bruce Arians have promised will be a determined effort to “keep the band together” for 2021.

With David agreeing to stay on a deal that includes $20 million guaranteed, linebacker Shaquil Barrett, defensive tackle Ndamukong Suh, tight end Rob Gronkowski, receiver Antonio Brown and running back Leonard Fournette are left as key players not under contract for next season.

The Bucs have also said they're open to giving Brady a contract extension, a move likely to free space under the salary cap.

The 43-year-old quarterback is due to earn $25 million in the final season of a fully guaranteed $50 million contract he signed in free agency last March.

Barrett, meanwhile, is coming off a year in which he made $15.8 million while playing under the franchise tag after leading the NFL with 19½ sacks in 2019. He had eight sacks in 2020 before adding a team-best four in the playoffs — three in the NFC championship game and one more in the Super Bowl.

Godwin has teamed with Evans over the past four seasons to give the Bucs one of the best receiving tandems in the league.

Evans is the only player in NFL history to begin a career with seven consecutive seasons with at least 1,000 yards receiving. Godwin posted career bests with 86 catches for 1,333 yards and nine TDs two years ago and has 244 receptions for 3,540 yards in 58 games since entering the league as a third-round draft pick in 2017.

Arians said last month that he doesn’t get involved in the financial aspects of signing or retaining players, but that he was hopeful the Bucs would find a way to keep Godwin.

“He loves it here. It’s hard to leave and go to another system just for money,” Arians said. “But it’s not bad paying two No. 1 receivers, that’s for sure, when they’re as good as our No. 1s.”