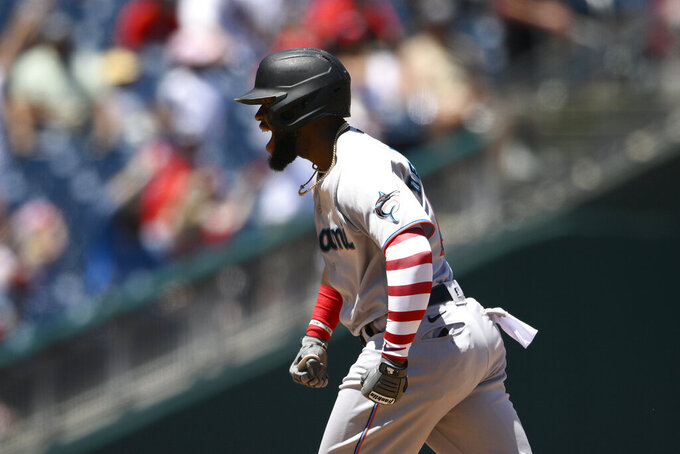 WASHINGTON (AP) — After watching Jesús Aguilar and Jesús Sánchez hit late-inning home runs to win games for the Miami Marlins over the weekend, Bryan De La Cruz was happy to get a similar chance Monday.

He made the most of it.

De La Cruz hit a two-run homer off the foul pole in the 10th inning to keep the Miami’s domination of the Washington Nationals going with a 3-2 victory.

“Just being able to do that with one swing, just put your team ahead, it’s a wonderful feeling,” he said through an interpreter. “It feels great just to do it for the whole team.”

The Marlins won the rare 11:05 a.m. start by beating the Nationals for the 12th time in 13 games this year, including seven in a row. They extended their winning streak to five and moved two games back of .500 at nearly the halfway point despite going 26-39 against everyone else.

“Essentially it seems that we’ve scored with these guys,” manager Don Mattingly said. “We seemed to have getting the outs we need to and getting some big hits when we need to."

De La Cruz became the latest Miami player to come up with a big hit during this run, after Sánchez hit a go-ahead two-run home run in the ninth Sunday and Aguilar homered and doubled Saturday. His fifth homer this season came off Tanner Rainey (1-3), who also gave up Sánchez’s shot to right less than 24 hours earlier.

It was the first time De La Cruz homered in the ninth inning or later in his major league career.

Miami's Braxton Garrett cruised through seven innings on 61 pitches before things got away from him in the eighth. His first and only walk proved costly when Ehire Adrianza stole second and scored on Luis Garcia’s RBI single that sent Garrett to the showers.

“I was just efficient early," Garrett said. "I was 0-1 a lot. And also our bullpen’s a little taxed. Our late-game guys have gone I think it was three days in a row, and it was in the back of my mind to try and get a few more innings out just for the bullpen.”

With top relievers Anthony Bass, Steven Okert and Tanner Scott unavailable after each pitching three days in a row, Mattingly pieced together eight outs with Zach Pop, Jimmy Yacabonis and Dylan Floro. Yacabonis (1-1) got the win after pitching a scoreless ninth, and Floro picked up his second save in as many days — his first two this season.

Washington’s Patrick Corbin made quick work of the Marlins for much of his seven innings, scattering eight hits and striking out four with one walk. The only run he gave up came in the third, when Luke Williams reached on a bunt single, advanced on Billy Hamilton's sacrifice and scored on Jesús Aguilar’s single.

Corbin, one of baseball’s worst pitchers earlier this season, has a 2.37 ERA and 22 strikeouts in 19 innings over his past three starts.

“He’s been attacking the strike zone,” manager Dave Martinez said. “He’s actually throwing the slider a little harder, and it looks like his fastball coming in, so it’s been very effective.”

While Garrett was fired up to pitch on the Fourth of July, Washington’s Nelson Cruz celebrated the holiday in style with red, white and blue Stars and Stripes cleats.

The Nationals grounded into three double plays, adding to their major league-leading total of 80 this season. One of those scored a run in the 10th, with second baseman Joey Wendle making a backhand flip from his glove to shortstop Miguel Rojas while falling after nabbing Garcia's grounder.

While Juan Soto was not in the Nationals lineup, the superstar outfielder pinch-hit in the eighth inning and drew a walk a day after leaving the game with tightness in his left calf. He was pulled immediately for a pinch-runner.

“He felt good enough to hit, but he couldn’t run and we didn’t want him to run,” Martinez said. “He got on base for us, and we had to get him out of there.”

Soto said an MRI did not show damage, and he figures he'll take it day by day.

“Everything was fine,” Soto said. “They said it’s just a little tight, so just going to take a couple days and see how it goes.”

Marlins: 1B Garrett Cooper was not in the lineup after taking misstep during the game Sunday. ... Wendle, on an every-other-day playing schedule since returning Friday from a monthlong absence with a strained right hamstring, pinch hit.

Marlins: RHP Sandy Alcantara (8-3, 1.95 ERA) makes his first start in July after being named NL pitcher of the month for June against RHP Noah Syndergaard (5-6, 3.86) and the Los Angeles Angels Angels on Tuesday in the opener of a two-game series in Miami.

Nationals: RHP Paolo Espino (0-1, 2.80) starts at LHP Christopher Sanchez and the Philadelphia Phillies on Tuesday in the start of a three-game series.