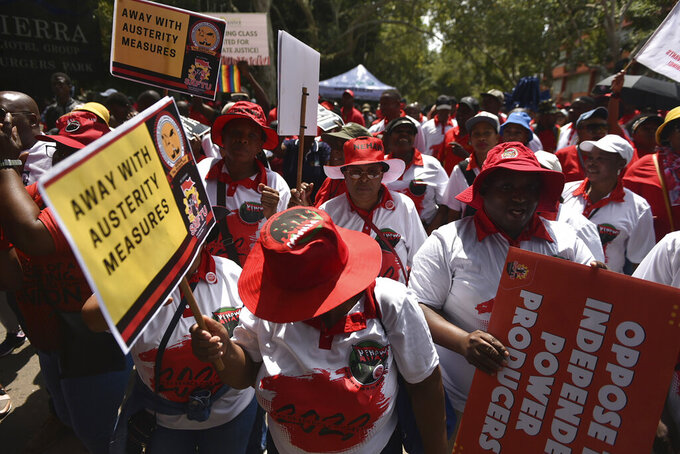 Alet Pretorius, ASSOCIATED PRESS
Civil servants take part in a protest march in Pretoria, Tuesday, Nov. 22, 2022. Seven unions in the public service face an uphill battle as they press on with their national day of action which will be the country's third national one-day strike by organised labour this year alone. (AP Photo/Alet Pretorius) 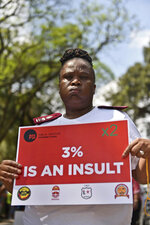 Negotiations between public sector unions and the government are deadlocked. The government is resolved to unilaterally implement a 3% pay hike, which hasn't satisfied the unions.

Traffic came to a standstill in Pretoria, one of South Africa's three capitals, as workers downed tools and marched to the offices of the national treasury to submit their demands.

The government has announced a no-work-no-pay principle for workers who took park in the demonstrations, but this did not deter them from staging demonstrations across the country’s major cities.

This was a second round of demonstrations after the Public Service Association, which represents over 200,000 public servants, initially declared a dispute with the government.

The wage dispute has now escalated, with up to 800,000 workers rejecting the government's pay increase.

While the government only reported minimal disruptions to services at government institutions like hospitals, further demonstrations may follow if an agreement is not reached.

The volatile situation in South Africa's public service is among many challenges faced by the government, including an unemployment rate of over 30%.

Ongoing power blackouts have added to the country’s economic woes. An estimated 2 million workers lost their jobs during the COVID-19 pandemic.

Employment minister Thulas Nxesi, a former trade unionist, was booed by workers as he arrived to receive the memorandum of demands.

Mike Shingange, deputy president of the Congress of South African Trade Unions, told workers that it was unacceptable that they continue working without any increase in their pay.

Shingange said the unions would continue mobilizing more workers to join nationwide pickets to force the government back to the negotiation table.