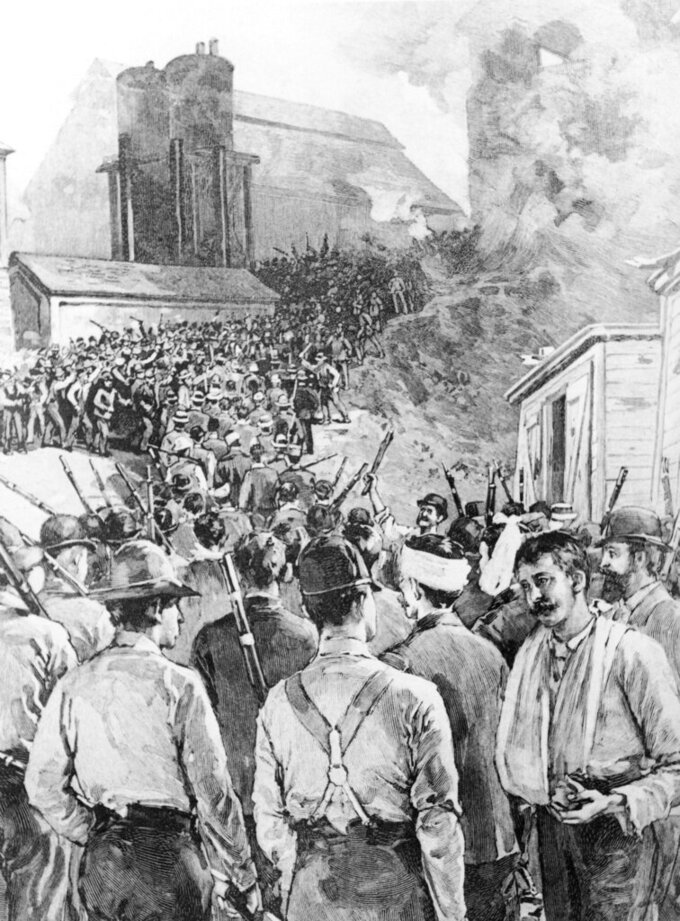 Uncredited, ASSOCIATED PRESS
FILE - Steel workers storm the Carnegie Steel Company during the Homestead Strike of 1892 in Homestead, PA. The dispute between the Amalgamated Association of Iron and Steel Works and the steel company was one of the deadliest labor disputes in U.S. history resulting in the death of 10 men. (AP Photo, File) 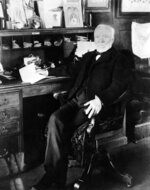 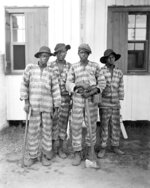 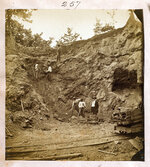 More than 150 years ago, a prison complex known as the Lone Rock stockade operated at one of the biggest coal mines in Tennessee.

It was powered largely by African American men who had been arrested for minor offenses — like stealing a hog — if they committed any crime at all. Women and children, some as young as 12, were sent there as well.

The work, dangerous and sometimes deadly, was their punishment.

The state was leasing these prisoners out to private companies for a fee, in a practice known all across the South as convict leasing. In states like Texas, Florida, Georgia and Alabama , prisoners were also used to help build railroads, cut timber, make bricks, pick cotton and grow sugar on plantations.

In a joint investigation, reporters from the Associated Press and Reveal at the Center for Investigative Reporting spent months unearthing this history. They focused on Tennessee Coal, Iron & Railroad, which ran the stockade and coal mine, and the company that later bought it, U.S. Steel.

The team found someone living today whose ancestor was imprisoned in the Lone Rock stockade nearly 140 years ago. They also interviewed the descendent of a man who got rich from his role in pioneering Tennessee’s convict leasing system.

The reporters also heard from U.S. Steel. For the first time, it said it was willing to discuss its past with members of the affected community.

Listen to the podcast here:

WHAT IS CONVICT LEASING?

Convict leasing was essentially a new form of slavery that started after the Civil War and went on for decades across the South. States — and companies — got rich by arresting mostly Black men and then forcing them to work for major companies.

The 13th Amendment, passed after the Civil War, banned slavery and involuntary servitude. But it made an exception for people convicted of a crime, offering legal cover for convict leasing.

Tennessee and many other states adopted similar language in their constitutions that still exists today.

WHAT WAS THE THE LONE ROCK STOCKADE?

The Lone Rock stockage operated in Tracy City, Tennessee for more than 25 years. The prisoners lived in cramped, unsanitary conditions. Built to hold 200 people at a time, the prison sometimes held 600.

The men risked their lives every day above ground too, manning fiery, dome-shaped coke ovens used in the iron-making process.

They were helping Tennessee, Coal, Iron and Railroad get rich. The company was an economic powerhouse, later bought by the world’s biggest company at the time: U.S. Steel Corporation.

HOW DID THE PRISON POPULATION CHANGE AFTER EMANCIPATION?

The racial makeup of prison populations changed almost overnight after the Civil War. In Tennessee, during slavery less than 5 percent of the prisoners were Black. In 1866, after emancipation, that number jumped to 52 percent. And by 1891 it had skyrocketed to 75 percent.

WHAT ARE BLACK CODES?

Black codes are laws passed by states that targeted African Americans for minor crimes such as vagrancy, jumping a ride on a train car or not having proof of employment.

In Tennessee, people were sentenced up to five years of hard labor in the coal mine for having interracial relationships.

WHAT DOES U.S. STEEL SAY NOW ABOUT THEIR USE OF CONVICT LEASING?

The United States Steel Corporation, also known as U.S. Steel, was founded by American business giants, which included J.P. Morgan and Andrew Carnegie. It has operations in the U.S. and Central Europe, and remains a leading steel producer.

The company used convict labor for at least five years in Alabama in the early 1900s, but has never spoken openly about this dark chapter of its history. It has misrepresented its use of prison labor and has not acknowledged the men who died in its mines.

After being contacted by the AP and Reveal reporters, the company agreed for the first time to sit down and talk with members of the affected community. U.S. Steel also confirmed it owns a cemetery located at the site of its former coal mine: “U. S. Steel does not condone the practices of a century ago,” it said in a statement. “Given the amount of time that has lapsed, we, unfortunately, do not have comprehensive records relative to this situation."

“We would be pleased to consider a memorial plaque should members of the affected community express an interest. We would also be happy to meet with them and discuss these topics.”

This story was supported by Columbia University’s Ira A. Lipman Center for Journalism and Civil and Human Rights in conjunction with Arnold Ventures.