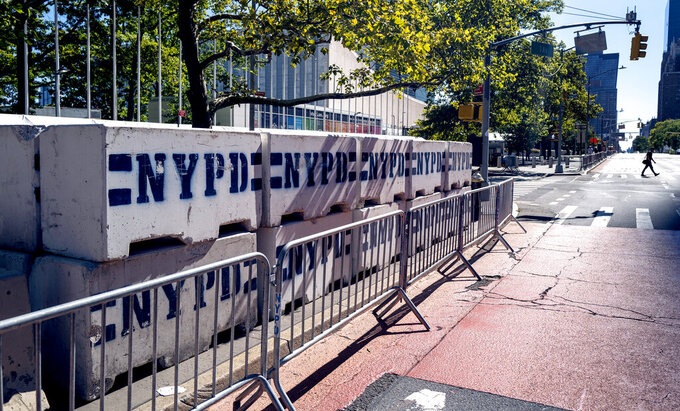 UNITED NATIONS (AP) — Things to watch beyond the main speeches from leaders at this week's high-level meeting of the U.N. General Assembly in New York:

— A MEETING at U.N. headquarters on Wednesday to commemorate the 20th anniversary of the U.N. conference on racism in Durban, South Africa will be closely watched. It is being boycotted by the United States, France, Israel, the United Kingdom, Canada and Australia because of concerns about anti-Semitic statements at the 2001 meeting.

— THERE ARE also high-level meetings on energy and the nuclear test ban treaty, and a summit on the connected system of producing, processing, distributing and consuming food, which according to the U.N. contributes an estimated one-third of greenhouse gas emissions. The U.N. Security Council will hold a high-level meeting Wednesday on climate and security.

— USUALLY, HIGH-LEVEL WEEK has hundreds of side events but because of the COVID-19 pandemic only a limited number are being held mainly virtually or outside U.N. headquarters. These include events on vaccines, on children as invisible victims of the coronavirus and conflict, on multilateralism and democracy, and on global hotspots including Yemen, Somalia, Afghanistan and Iraq.

— THE OUTCOME of a meeting Wednesday of the foreign ministers of the five veto-wielding permanent members of the Security Council is eagerly awaited. Afghanistan and other major global challenges are expected to be on the agenda, including the lack of progress on the United States rejoining the 2015 Iran nuclear deal. Iran’s new foreign minister, Hossain Amir Abdollahian, is coming to New York and there is speculation that he may meet with the five countries that remain part of the deal — Russia, China, Britain, France and Germany.