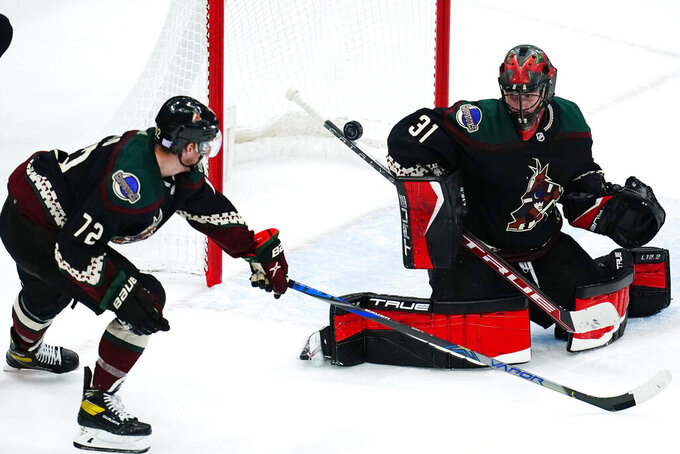 Ross D. Franklin, ASSOCIATED PRESS
Arizona Coyotes goaltender Scott Wedgewood (31) makes a save against the Edmonton Oilers with his stick as he gets some help from Coyotes center Travis Boyd (72) during the third period of an NHL hockey game Wednesday, Nov. 24, 2021, in Glendale, Ariz. The Oilers won 5-3. (AP Photo/Ross D. Franklin)

GLENDALE, Ariz. (AP) — Leon Draisaitl and Connor McDavid each had two goals and two assists to lead the Edmonton Oilers past the Arizona Coyotes 5-3 on Wednesday night.

Draisaitl has 10 goals in his last eight games, and McDavid got right back in the scoring column after his season-long, 17-game point streak ended in a 4-1 loss Tuesday at Dallas.

Draisaitl leads the NHL with 20 goals and 40 points, and he became the second player in Edmonton history with 40 points before the 20th game of a season. Wayne Gretzky was the first.

McDavid has 13 goals and ranks second in the league with 35 points. His empty-net goal with 28 seconds remaining clinched the victory after Travis Boyd and Shayne Gostisbehere scored for the Coyotes in the final seven minutes to trim it to 4-3.

“They want to play to their strengths, and we have to continue to build our team around them,” Tippett said of Draisaitl and McDavid.

Draisaitl's second goal of the night at 13:08 of the third period made it 4-1, the Oilers' fourth straight goal.

Clayton Keller scored four minutes into the game to give Arizona a 1-0 lead before McDavid tied it late in first period when he punched in his own rebound from the doorstep 49 seconds into a power play.

Zack Kassian had a goal and two assists as the McDavid-Draisaitl-Kassian line finished with 11 points. Draisaitl enjoyed his league-high 10th game of at least three points.

Kassian joined McDavid and Draisaitl for this game as Tippett juggled lines. Each member of the trio had a goal while they combined for eight points in the third period.

“They were kind of flying around the O-zone,” Oilers defenseman Tyson Barrie said.

“I don't see them slowing down any time soon. Almost unstoppable, the way that they see the game and the speed they play it at. The plays they are able to make are second to none in the league."

Draisaitl beat goaltender Scott Wedgewood from a sharp angle on the right side for a 2-1 lead at 10:53 of the second, the second of four straight Oilers goals. Wedgewood made 39 saves.

The Coyotes had won two straight for the first time this season and had seven points in the last four games.

“It would have been easy at 4-1 to close the door,” coach Andre Tourigny said. “Not once this year have I had to address the effort of our guys. Again tonight they fought hard. They battled.”

Mikko Koskinen stopped 24 shots for the Oilers, who won for the third time in four games.

The Oilers will conclude a stretch of eight road games in their last 10 at Vegas on Saturday, after which they will play seven of eight at home before another long trip. The Oilers have an eight-game road swing from Dec. 22 to Jan. 8 when the World Junior Championships occupy Rogers Place.

Coyotes center Jay Beagle (lower body) missed his first game of the season. … Coyotes goalie Carter Hutton, on injured reserve with a lower-body injury, entered the league’s COVID-19 protocol. … Arizona forwards Andrew Ladd and Johan Larsson remain in COVID-19 protocol. … Tippett was 282-257 in eight years with the Coyotes, coaching the team to its last three playoff appearances from 2010-12. He is in his third season with the Oilers.

Oilers: Play at Vegas on Saturday.