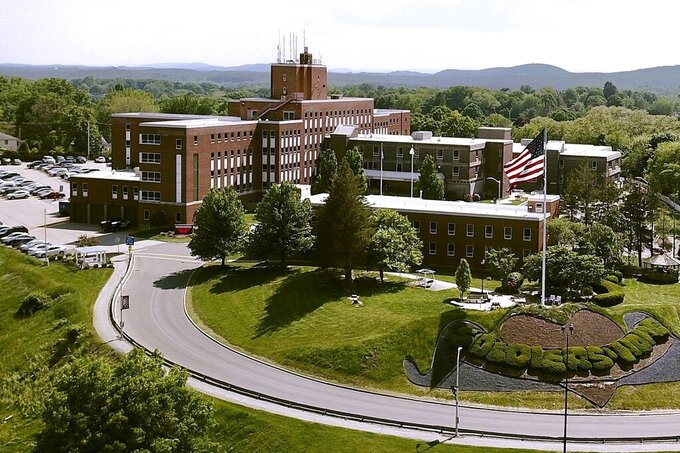 Patrick Johnson, ASSOCIATED PRESS
The Holyoke Soldiers' Home is seen in this aerial photograph, May 29, 2018, in Holyoke, Mass. The Massachusetts Inspector General released a report Friday, April 29, 2022, highly critical of the selection process for the superintendent of a veterans care center at which nearly 80 veterans died after falling ill with the coronavirus. The report detailed critical shortcomings in the management of the Holyoke Soldiers' Home as well as concerns regarding the supervision of the superintendent prior to the pandemic. (Patrick Johnson/The Republican via AP, File)

The leader of a veterans' care center in Massachusetts where 76 veterans died after contracting the coronavirus in the spring of 2020 lacked both the leadership skills and the temperament to run such a facility when he was hired in 2016, according to a blistering state Inspector General's report released Friday.

The 91-page report, which covers the period from May 2016 until February 2020 — just before the pandemic struck with full force — was also highly critical of the process that led to the hiring of Bennett Walsh as superintendent of the Holyoke Soldiers' Home and of state oversight of the home.

The investigation that led to the report started in 2019 in response to pre-pandemic complaints about Walsh, who resigned in October 2020 as he faced criminal charges over his handling of one of the deadliest known COVID-19 outbreaks at a long-term care facility in the U.S. Those charges were dismissed last year.

“Superintendent Walsh did not have and did not develop the leadership capacity or temperament for the role of superintendent,” a summary of the report said. “He created an unprofessional and negative work environment, retaliated against employees he deemed disloyal, demonstrated a lack of engagement in the home’s operations and circumvented his chain of command.”

He sometimes became visibly angry at employees, yelled at them, and in one case said publicly that he wanted to “hit” and “belt” a worker, according to the report. He also said that he wanted to hurt a veteran who had spoken out against him, the report said.

Walsh was also frequently absent during regular business hours and staff did not always know where he was.

Walsh, a former Marine, had no supervisory experience in a health care setting or skilled nursing facility when he was hired, although according to state law, that was not required of the home's superintendent at the time. His appointment also did not properly comply with state law.

The report acknowledges that Walsh inherited some problems with the 240-bed facility when he was appointed by Gov. Charlie Baker in 2016, including ongoing staffing issues, tension with employee unions and key leadership vacancies.

“Even with these management challenges, the office found that Superintendent Walsh was not engaged in the broad range of leadership duties required to manage the home,” the report said.

Walsh declined to answer questions from the Inspector General’s office and instead invoked his Fifth Amendment right against self incrimination, the report said.

One of Walsh's attorneys, Michael Jennings, said in a statement that his legal team is solely focused on a response to the state attorney general's appeal of the dismissal of the criminal charges.

“We have no comment at this time relating to the newly released Inspector General’s investigation report which has no relevance to our work responding to that appeal," he wrote.

Another attorney for Walsh has in the past defended the way he ran the home, and blamed the state for failing to respond to requests for help.

The report also criticized the state Executive Office of Health and Human Services and the state Department of Veterans’ Services for not adequately addressing complaints about Walsh. The state twice investigated Walsh during his four years at the facility, but “those investigations were flawed, unnecessarily restricted in scope and biased in Superintendent Walsh’s favor,” the report said.

Many of the issues in the Inspector General's report have already been resolved, according to a statement from the office of Health and Human Services Secretary Marylou Sudders.

“The administration is reviewing the report from the Inspector General, which identified several recommendations that have already been addressed by the Department of Veterans’ Services and the Soldiers’ Home. The administration filed legislation almost two years ago to strengthen oversight of the soldiers’ homes and looks forward to addressing these issues with the Legislature,” the statement said.

In addition, an August survey by the Joint Commission, an independent organization that runs a health care accreditation process, found no deficiencies at Holyoke, while the U.S. Department of Veterans Affairs has inspected and certified the facility, the state said.

In addition to those who died, dozens of other residents as well as staff members fell ill with the disease.

An investigation by a former federal prosecutor hired by Baker found that management made several “utterly baffling” decisions that allowed the virus to run amok, such as combining two locked dementia units, both of which already housed some residents with the virus.

The Inspector General's report released Friday also makes several recommendations to improve oversight and management not just in Holyoke but at its sister facility in Chelsea.

They include requiring superintendents to be a licensed nursing home administrator with extensive management experience; giving the state Department of Public Health the authority to provide independent clinical oversight and support; and the establishment of an ombudsperson and a hotline so residents, their families and staff can confidentially report problems.

The state has announced plans to build a new $400 million home to replace the current Holyoke facility that was built in the early 1950s.