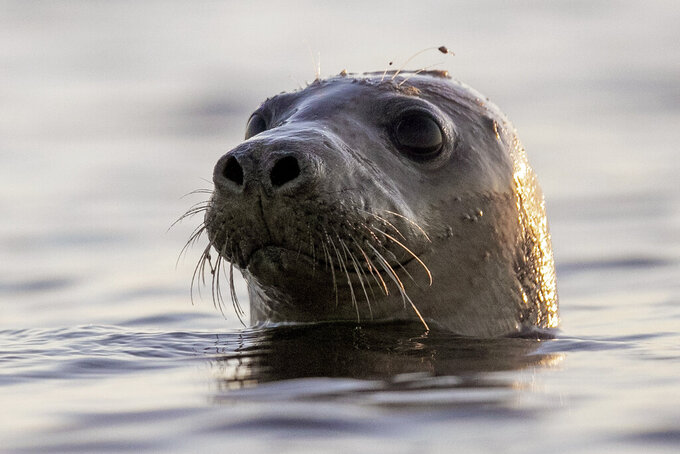 FREEPORT, Maine (AP) — Facial recognition technology is mostly associated with uses such as surveillance and the authentication of human faces, but scientists believe they've found a new use for it — saving seals.

A research team at Colgate University has developed SealNet, a database of seal faces created by taking pictures of dozens of harbor seals in Maine's Casco Bay. The team found the tool's accuracy in identifying the marine mammals is close to 100%, which is no small accomplishment in an ecosystem home to thousands of seals.

The researchers are working on expanding their database to make it available to other scientists, said Krista Ingram, a biology professor at Colgate and a team member. Broadening the database to include rare species such as the Mediterranean monk seal and Hawaiian monk seal could help inform conservation efforts to save those species, she said.

Cataloguing seal faces and using machine learning to identify them can also help scientists get a better idea of where in the ocean seals are located, Ingram said.

“Understanding their dispersal, understanding their patterns really helps inform any conservation efforts for the coast,” she said. “For mobile marine mammals that move around a lot and are hard to photograph in the water, we need to be able to identify individuals.”

SealNet is designed to automatically detect the face in a picture, crop it and recognize it based on facial patterns such as eyes and nose shape, as it would a human. A similar tool called PrimNet that is for use on primates had been used on seals previously, but SealNet outperformed it, the Colgate researchers said.

The Colgate team published its findings in April in the scientific journal Ecology and Evolution. They processed more than 1,700 images of more than 400 individual seals, the paper said.

The paper stated that the “ease and wealth of image data that can be processed using SealNet software contributes a vital tool for ecological and behavioral studies of marine mammals in the developing field of conservation technology.”

Harbor seals are a conservation success story in the U.S. The animals were once subject to bounties in New England, where they were widely viewed by fishermen as pests in the 19th and early 20th centuries. But the Marine Mammal Protection Act, which turned 50 in October, extended them new protections — and populations began to rebound.

Seals and other marine mammals have long been studied using satellite trackers. Using artificial intelligence to study them is a way to bring conservation into the 21st century, said Jason Holmberg, executive director of Wild Me, an Oregon-based company that works to bring machine learning to biologists. Wild Me is developing a potential partnership with SealNet.

“This is a shift and a lift of ‘big brother’ style technology to a very benevolent conservation-style goal," Holmberg said.

Harbor seals are now fairly abundant in New England waters, where they haul out on rocks and delight seal watch cruises and beachgoers. Other seal species, however, remain in jeopardy. The Mediterranean monk seal is thought to be the world's most endangered seal with only a few hundred animals remaining.

The use of facial recognition could provide more valuable data, said Michelle Berger, an associate scientist at the Shaw Institute in Maine, who was not involved in the SealNet research.

“Once the system is perfected I can picture lots of interesting ecological applications for it,” Berger said. “If they could recognize seals, and recognize them from year to year, that would give us lots of information about movement, how much they move from site to site.”

The Colgate researchers are also working with FruitPunch, a Dutch artificial intelligence company, to improve some aspects of SealNet to encourage wider use. FruitPunch is getting a few dozen scientists around the world to work on a challenge to streamline SealNet's workflow, said Tjomme Dooper, FruitPunch's head of partnerships and growth.

Improved automation of the facial recognition technology could make SealNet more useful to more scientists, Dooper said. That would open new opportunities to study the animals and help protect them, he said.

“What this does is help the biologists study the behavior of seals, and also population dynamics,” Dooper said. “Harbor seals are an important indicator species for the ecosystem around them.”