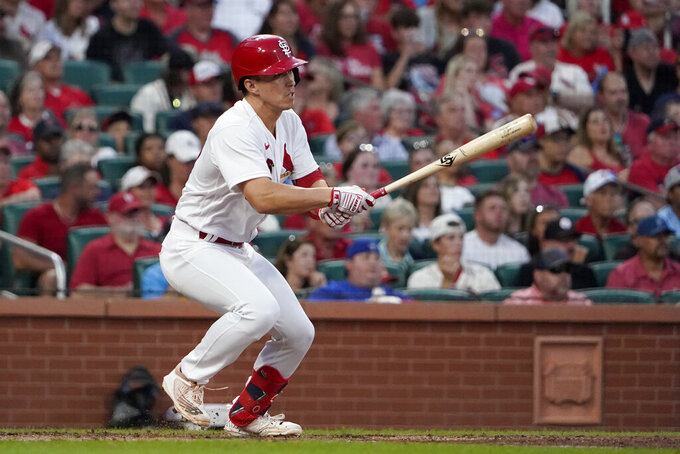 ST. LOUIS (AP) — Dylan Carlson drove in a pair of runs and the St. Louis bullpen combined for four scoreless innings as the Cardinals came back to beat the Miami Marlins 5-3 on Tuesday night.

Carlson went 2 for 4 and has hit in five straight games. Teammate Tommy Edman scored a pair of runs and stole his 19th base of the season.

“Guys around me are taking good at-bats, putting me in a position where pitchers have to come into the zone,” Carlson said. “Just trying to be consistent, take advantage of it.”

Cardinals starter Dakota Hudson (6-4) went five-plus innings, allowing three runs. He was lifted after issuing a leadoff walk to Jorge Soler in the sixth. Junior Fernández pitched a scoreless sixth and seventh, and Giovanny Gallegos did the same in the eighth. Ryan Helsley struck out the side to earn his sixth save in eighth opportunities.

“Guys are gonna get opportunities in those middle innings and some will embrace the competition and the pressure that comes with it,” Cardinals manager Oliver Marmol said. “Today we saw a guy (Fernández) embrace it and really run with it. That was fun to watch.”

Fernández has not given up a run in 6 1/3 innings since being recalled from Triple-A Memphis on June 22.

“I went down there to Triple-A to work on my sinker, it’s another pitch in my arsenal,” Fernández said. “So, it gives me the confidence to throw it at any hitter and any count.”

The Marlins struck first with a three-run third. Miguel Rojas had an RBI double and Nick Fortes and Soler added run-scoring singles. Soler’s hit was the 40,000th in Marlins franchise history.

But the Cardinals knocked out Marlins starter Braxton Garrett while batting around in a four-run fifth. Edmundo Sosa got it started with an RBI triple. Edman, Carlson and Paul Goldschmidt followed with RBI hits to give the Cardinals a 5-3 lead.

“When they scored, we’re down two, it felt like we were down 10,” Marlins manager Don Mattingly said. “And that’s just not where you should feel as a club, a club like ours that is capable of scoring and it just seems like we got down a couple runs and it was like a mountain to climb.”

Garrett (1-3) allowed five runs in 4 2/3 innings. He allowed the first three to reach in the fourth, including an RBI single by Carlson, but got out of the frame without any additional damage by getting Nolan Arenado to ground into a double play and a deep fly-out by Juan Yepez.

Jon Berti went 0 for 4, snapping his 24-game on base streak and 11-game hitting streak.

The Cardinals won for the third time in their last four games, while the Marlins have lost seven of their last eight games at Busch Stadium.

FACES IN THE CROWD

Former MLB pitcher Roger Clemens was at the game. Clemens is the godfather of Cardinals rookie outfielder Conner Capel, who made his major league debut Monday.

Hall of Fame shortstop Ozzie Smith was also at the game and got a loud ovation when shown on the video board in the sixth inning.

Berti made a diving stop that turned into an inning-ending double play in the second. Playing on the third base side of second in a shift, he stopped a smash off the bat of Albert Pujols and from his knees flipped the ball to Rojas to start the 4-6-3 double play.

Marlins: 2B Jazz Chisholm (back spasms) was back in the lineup after missing the last two games, but was removed in the middle of the second with right lower back discomfort. He popped out to right in his only at-bat. Chisholm will undergo tests tomorrow. Erik González entered the game at third and Berti moved to second.

Cardinals: OF Tyler O’Neill (left knee strain) took part in running drills. The next step will be running the bases before being cleared for a rehab assignment that is expected to begin next week.