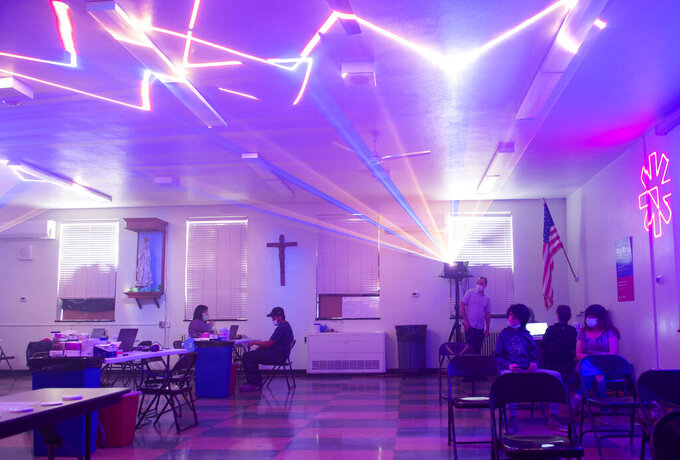 Emily Matthews, ASSOCIATED PRESS
People sit and wait, Monday, May 17, 2021, at a COVID-19 vaccination clinic at St. Patrick Catholic Church in Canonsburg, Pa., which featured laser beams and music. George Dodworth, of Lightwave International, helped set up the vaccination site and decided to add lasers and music to try to make it more fun and ease some of the apprehension and anxiety younger groups might feel while getting the vaccine. (Emily Matthews/Pittsburgh Post-Gazette via AP)

Intricate henna designs on the hands of Muslim girls in Peshawar, Pakistan. Horseback riders atop colorfully festooned steeds in Zazzau, Nigeria. A child tossed into the air at the Dome of the Rock Mosque in Jerusalem.

These are some of the ways the world’s Muslims celebrated the Eid al-Fitr festival in mid-May bringing an end to Ramadan, the holy month of fasting, as captured by AP photographers around the globe.

Inside a multi-story mosque in Dhaka, Bangladesh, worshippers solemnly made Eid al-Fitr appeals above prayer mats on the floor. In Bekasi, Indonesia, women wearing face masks to ward off transmission of the coronavirus knelt on a street, some of them clutching small children, as a train whooshed by steps away.

The joyous observations contrasted, however, with the sorrow and suffering from an 11-day war that erupted between Israel and the Gaza Strip’s militant Hamas rulers – a conflict also reflected in striking AP images.

In Jerusalem’s Old City, a smoky haze filled the air at the compound of the sacred Al-Aqsa mosque as Palestinian protesters and Israeli security forces faced off in just one day of weeks of clashes over Israel’s policing of the area during Ramadan and threatened evictions.

And in east Jerusalem, where dozens of families were at risk of losing their homes to Jewish settlers, Palestinian Muslims broke their Ramadan fast together at tables in a street as Jewish settlers gathered nearby to begin Shabbat at an occupied house. Israeli police stood guard between the two groups amid the rising pre-war tensions.

More than 250 people were killed before a cease-fire was reached, as Hamas launched rockets and Israel responded with powerful airstrikes. Most of the damage and death came on the Palestinian side, but there was also grieving among Jews.

In Hadid, central Israel, funeral mourners gazed at the shrouded body of a 56-year-old man who died of wounds sustained when his car was pelted with rocks during Israeli Arab riots.

Early May also witnessed celebrations of Easter by Orthodox Christians.

In Cairo, a young girl clung to the leg of a Coptic Orthodox deacon during Mass marking the holy day. And near Donetsk, Ukraine, priests walked in a procession outside a monastery heavily damaged by shelling.

These and more are among the AP’s top faith-related images published in May.