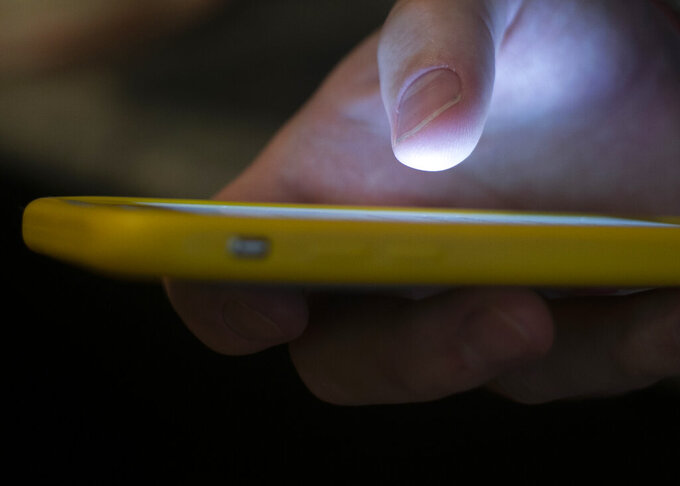 Jenny Kane, ASSOCIATED PRESS
FILE - In this Sunday, Aug. 11, 2019, photo, a man uses a cell phone in New Orleans. As the coronavirus spread across borders early in the pandemic, calls to global helplines showed a striking similarity in the toll on mental health _ from China to Lebanon, Finland to Slovenia. (AP Photo/Jenny Kane, File)

As the coronavirus spread across borders early in the pandemic, calls to global helplines showed a striking similarity in the toll on mental health — from China to Lebanon, Finland to Slovenia.

An analysis of 8 million calls to helplines in 19 countries, published Wednesday in Nature, reveals a collective response to unprecedented, uncertain times.

Callers’ worries centered on fears of infection, loneliness and physical health. Calls about relationship issues, economic problems and suicide-related issues were generally less prevalent than before the pandemic.

The Swiss and German researchers looked at helplines in 14 European countries, the United States, China, Hong Kong, Israel and Lebanon. They included suicide-prevention hot lines and ones providing crisis counseling.

“We were struck by how similar the broad evolution of helpline call patterns looked across nations,’’ said Marius Brulhart, a University of Lausanne economics professor and the study’s lead author.

Pooling country-specific data during the pandemic’s first 12 weeks in 2020, the researchers found that call volumes peaked at six weeks, rising 35% above calls during the same period in 2019.

The researchers also analyzed data through spring 2021 from two of the largest helplines, in France and Germany. Call patterns in those two countries followed upswings and downswings in infections and government restrictions, and the concerns raised were similar to those early in the pandemic.

Strict lockdown and social distancing measures were linked with more calls due to fear, loneliness and suicidal thinking or behavior. Governmental financial support for workers who lost jobs and businesses that lost patrons had the opposite effect, “alleviating distress and mental health concerns,’’ the researchers said.

Karestan Koenen, a Harvard mental health researcher, said patterns linking a decline in calls with government assistance is an important takeaway for policymakers.

Analyzing helpline data is “an incredibly creative way to assess mental health in the pandemic’’ in an array of countries, she said. In the U.S., crisis helplines have been heavily promoted throughout the pandemic and that may have broadened their use, Koenen noted.

“The idea that fear was part of the early manifestations both makes research sense but also logical sense,’’ Bass said. The virus “was an unknown that nobody had experienced before.’’

Bass noted that the study didn’t include developing countries, such as those in Africa that have experienced Ebola and other disease outbreaks. People in those countries might have reacted differently to the early days of the COVID-19 pandemic than the countries included in the analysis, she said.

Still, the study showed how prevalent helplines are around the world, Bass said, and they are available in many more countries than were included in the study.

Brulhart said those used in the study manage data in a way that made them accessible for academic research.