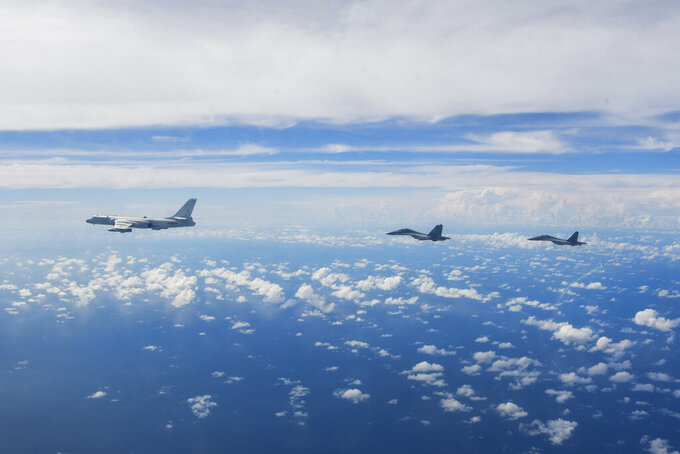 Li Bingyu, ASSOCIATED PRESS
In this photo released by Xinhua News Agency, aircraft of the Eastern Theater Command of the Chinese People's Liberation Army (PLA) conduct a joint combat training exercises around the Taiwan Island on Sunday, Aug. 7, 2022. China said Monday it was extending threatening military exercises surrounding Taiwan that have disrupted shipping and air traffic and substantially raised concerns about the potential for conflict in a region crucial to global trade. (Li Bingyu/Xinhua via AP)

BEIJING (AP) — China said Monday it is extending threatening military exercises surrounding Taiwan that have disrupted shipping and air traffic and substantially raised concerns about the potential for conflict in a region crucial to global trade.

The exercises will include anti-submarine drills, apparently targeting U.S. support for Taiwan in the event of a potential Chinese invasion, according to social media posts from the eastern leadership of China’s ruling Communist Party’s military arm, the People’s Liberation Army.

China claims Taiwan as its own territory and its leader, Xi Jinping, has focused on bringing the self-governing island democracy under the mainland’s control, by force if necessary. The two sides split in 1949 after a civil war, but Beijing considers visits to Taiwan by foreign officials as recognizing its sovereignty.

Xi is seeking a third term as Communist Party leader later this year. His control over the armed forces and what he has defined as China’s “core interests” — including Taiwan, territorial claims in the South China Sea and historic adversary Japan — are key to maintaining his nationalist credentials.

The military has said the exercises, involving missile strikes, warplanes and ship movements crossing the midline of the Taiwan Strait dividing the sides, are a response to Pelosi’s visit.

China has ignored calls to calm the tensions, and there was no immediate indication of when it would end what amounts to a blockade.

On Monday, Chinese Foreign Ministry spokesperson Wang Wenbin said China would “firmly safeguard China’s sovereignty and territorial integrity, resolutely deter the U.S. from containing China with the Taiwan issue and resolutely shatter the Taiwan authorities’ illusion of “relying on the U.S. for independence.”

Asked in Dover, Delaware, on Monday about China’s response to Pelosi’s visit, U.S. President Joe Biden said: “I’m not worried, but I’m concerned they’re moving as much as they are. But I don’t think they’re going to do anything more than they are.”

China’s slowing economic growth, which has reduced options among migrant workers as well as college graduates, has raised the specter of social unrest. The party has maintained its power through total control of the press and social media, along with suppression of political opponents, independent lawyers and activists working on issues from online free speech to LGBTQ rights.

China doesn’t allow public opinion polls, and popular opinion is hard to judge. However, it generally skews in favor of the government and its efforts to restore China’s former dominant role in the region that puts it in conflict with the United States and its allies, including Japan and Australia.

Taiwan’s defense ministry said Sunday it detected a total of 66 aircraft and 14 warships conducting the naval and air exercises. The island has responded by putting its military on alert and deploying ships, planes and other assets to monitor Chinese aircraft, ships and drones that are “simulating attacks on the island of Taiwan and our ships at sea.”

The drills will include snipers, combat vehicles, armored vehicles as well as attack helicopters, said the report, which cited an anonymous source.

Taiwan President Tsai Ing-wen has called on the international community to “support democratic Taiwan” and “halt any escalation of the regional security situation.” The Group of Seven industrialized nations has also criticized China’s actions, prompting Beijing to cancel a meeting between Foreign Minister Wang Yi and his Japanese counterpart, Yoshimasa Hayashi.

China has cut off defense and climate talks with the U.S. and imposed sanctions on Pelosi in retaliation for her visit.

In Washington, Taiwanese de facto ambassador Bi-khim Hsiao said China had no reason to “be so furious” over Pelosi’s visit, which follows a long tradition of American lawmakers visiting Taiwan.

“Well, you know, we have been living under the threat from China for decades,” Hsiao told CBS News on Sunday. “If you have a kid being bullied at school, you don’t say you don’t go to school. You try to find a way to deal with the bully.

Colin Kahl, the U.S. under secretary of defense for policy, told reporters Monday that Beijing’s reaction to Pelosi’s visit was a “manufactured crisis,” noting that the U.S. policy toward Taiwan and China remains unchanged and that Congress is an independent body of government.

He said U.S. forces in the region would continue to operate, fly and sail wherever is permitted under international law, including the Taiwan Strait.

On a visit to Myanmar, whose Chinese-backed military government has been accused of murdering its opponents, Chinese Foreign Minister Wang Yi said Washington was “taking the opportunity to build up its military deployment in the region, which deserves high vigilance and resolute boycott from all sides.”

“China’s firm stance” is aimed at “earnestly safeguarding peace across the Taiwan Strait and regional stability,” Wang was quoted as saying by the official Xinhua News Agency.