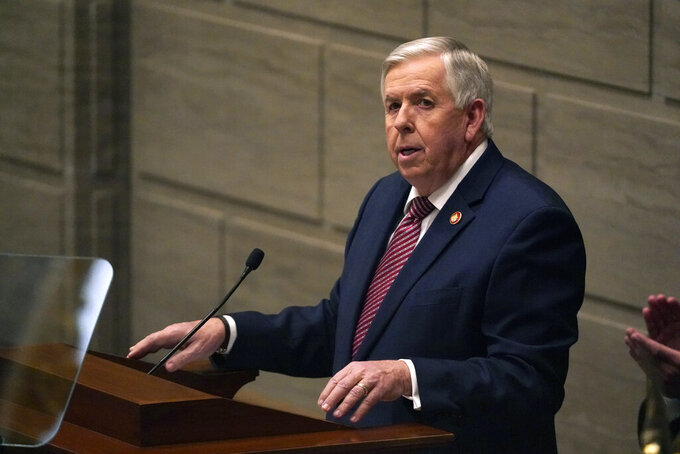 Jeff Roberson, ASSOCIATED PRESS
FILE - In this Jan. 27, 2021, file photo, Missouri Gov. Mike Parson delivers the State of the State address in Jefferson City, Mo. A judge on Tuesday, Aug. 31, sided with Gov. Parson in his decision in June to end several federal programs that provided enhanced jobless benefits for Missourians. The Republican governor said it was meant to prod people back to work, but Missouri Jobs With Justice, which filed suit on behalf of unemployed Missourians, said the decision was damaging to many people who lost work during the COVID-19 pandemic. AP Photo/Jeff Roberson, File)

A Missouri judge on Tuesday refused to reinstate federal unemployment benefits that were cut in June when Gov. Mike Parson pulled out of several programs, saying the court “would not substitute its judgment” for that of the governor.

The ruling by Cole County Circuit Judge Jon Beetem came a day after lawyers representing Missouri residents who lost the jobless benefits asked for reinstatement with back pay that, for some people, could have amounted to $1,500.

The enhanced benefits from several federal programs added money to the unemployment checks for out-of-work Americans to help ease the crunch caused by shutdowns for the COVID-19 pandemic. But some Republican governors, including Parson, ended the benefits, saying they wanted to prod people to rejoin the workforce.

In his four-page ruling denying a preliminary injunction, Beteem wrote that "the balancing of harms and the public interest strongly favor the Governor's decision to promote economic recovery and encourage workers' re-entry into Missouri's critically understaffed labor force.

“The Court will not substitute its judgment for that of Missouri's duly elected Governor on such an important policy question, which both Missouri law and the principle of separation of powers confer on Missouri's Executive Branch,” Beetem wrote.

Missouri Attorney General Eric Schmitt said in a statement that the ruling “affirmed the legality of Governor Parson’s decision to terminate these temporary benefits and will hopefully lead to the hiring of workers for businesses that desperately need the help.”

Missouri Jobs With Justice, which filed the lawsuit, said it was disappointed in the ruling and still evaluating what to do next.

“The Governor said this would create job growth, but data shows it hasn’t,” Missouri Jobs With Justice said in a statement. “Instead his policies continue to wreak havoc on the lives of the people who he is supposed to represent and care for.”

The enhanced benefits expire next week for those still receiving them.