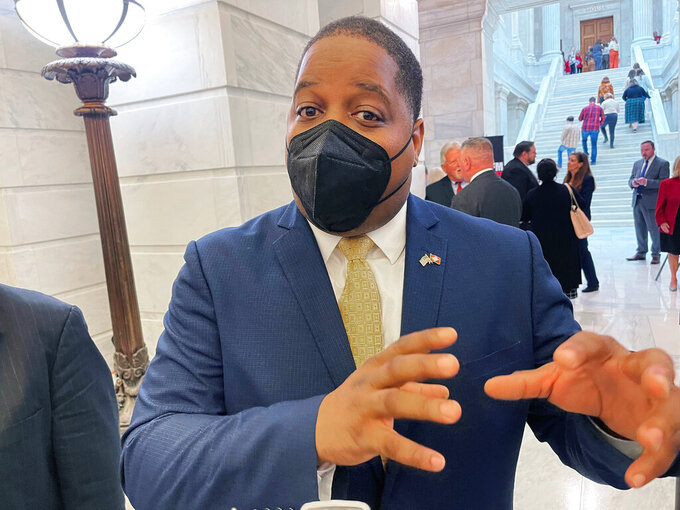 LITTLE ROCK, Ark. (AP) — Sarah Sanders won the Republican nomination for governor in Arkansas on Tuesday, putting her on a clear path to lead a solidly red state where Donald Trump’s popularity has overshadowed questions about his administration’s credibility that she faced during her time as White House press secretary.

Sanders won the GOP primary for the office her dad, former Gov. Mike Huckabee, held for a decade after a race where she shattered fundraising records. Sanders bombarded the state’s airwaves with TV ads invoking the former president and going after his favorite targets, including President Joe Biden and Vice President Kamala Harris.

Sanders headed into the primary virtually assured of the nomination, and she remains a heavy favorite in the general election in a state that hasn’t elected a Democrat governor since 2010. Nuclear engineer and ordained minister Chris Jones won the Democratic nomination in Tuesday's primary.

During her victory speech Tuesday, Sanders didn’t mention Trump or Biden and invoked the fatal shooting of at least 19 children at a Texas elementary school as a “stark and humbling reminder of just how precious life is.”

“Every single life has value and the most vulnerable among us should be those that we are fighting for and protecting the most,” Sanders said. “I can assure you that in my administration, that’s exactly what we will do. We will make sure that when a kid is in the womb, they’re as safe as they are in the classroom, the workplace, the nursing home, because every stage of life has value.”

As Trump’s spokesperson, Sanders was one of his closest White House aides and was the face of an administration that contributed to the nation’s stark divide. She’s running at a time that Republicans around the country are adopting the president’s rhetoric and approach on a number of issues, including immigration policy and the way race is taught in schools.

Sanders joked Tuesday night about her shift from press secretary to nominee.

“When I worked at the White House, nobody ever cheered when I went up to the podium," she said. “This is different, but I like it a whole lot better."

During Sanders’ nearly two-year tenure at the White House, she scaled back daily televised briefings after repeatedly sparring with reporters who aggressively questioned her. She faced questions about her credibility, particularly after special counsel Robert Mueller’s report revealed that Sanders admitted making an unfounded claim to reporters about FBI agents’ reaction to director James Comey’s firing. But she also earned reporters’ respect working behind the scenes to develop relationships with the media.

The White House had failed to disclose the reimbursement. Sanders said she didn’t know anything about the repayment until Giuliani disclosed it.

Sanders in her ads embraced Trump’s endorsement and his rhetoric, promising to use the state’s top office to fight Biden and the “radical left,” something that’s awfully hard to find in a state where no Democrat holds statewide or federal office. She also invoked one of Trump’s favorite targets, the national news media.

“As White House press secretary, I never had to worry about the far left and their allies at CNN or the New York Times defining me,” Sanders says in one TV spot. “Because I have a creator who’s already done that.”

But she danced more delicately around some of Trump’s biggest grievances, especially his lies that the 2020 presidential election was stolen from him.

Sanders in interviews has stopped short of calling the presidential election stolen, unlike Trump-endorsed candidates in Pennsylvania, Georgia and elsewhere who have run on his false claims. Sanders said she thinks Trump has the right to call the election stolen, though she said she can’t say how much fraud there was in 2020. An Associated Press review of every potential case of voter fraud in the six battleground states disputed by Trump found fewer than 475 — a number that would have made no difference in the 2020 presidential election.

“What I do know is the country would be infinitely better off right now if Donald Trump was in the White House,” Sanders told the AP in an interview earlier this month.

Hutchinson endorsed Sanders in November after her two chief rivals for the nomination — Lt. Gov. Tim Griffin and Attorney General Leslie Rutledge — dropped out to seek other offices. Hutchinson was barred by term limits from seeking reelection.

Trump publicly encouraged Sanders to run for governor when she left the White House in 2019 to return to her home state.

Sanders was already well known in Arkansas politics, going back to when she appeared in ads for her father’s campaigns. She managed Sen. John Boozman’s 2010 election and worked as an adviser to Sen. Tom Cotton’s in 2014. She appeared in ads endorsing Boozman, who won the GOP primary for his seat after fending off challenges from the right.

Sanders has run on a promise to phase out the state’s income tax, though she’s stopped short of giving a timeline for doing so or offering details on how she’d pay for the loss in revenue.

Sanders defeated former talk radio host Doc Washburn, who mounted a long shot bid against her in the primary by trying to paint her as not conservative enough partly because of her endorsement from Hutchinson and backing of Boozman.

Jones, who won the Democratic nomination in a five-person primary, launched his campaign last year with a video that quickly went viral and contrasted with Sanders’ rhetoric. During his victory speech, he continued that theme, presenting himself as a more unifying figure than Sanders.

“Arkansans are clear that we are sick and tired of the politics of division,” Jones said.

Jones is among dozens of Black Democrats who are running in areas that Trump has won, in the hopes of mobilizing more voters. Arkansas has never elected an African-American to statewide or federal office.

Before jumping into the governor’s race, Jones headed the Arkansas Regional Innovation Hub, a nonprofit that helps entrepreneurs. He has dubbed his platform “PB&J,” which he says stands for preschool, broadband and jobs.