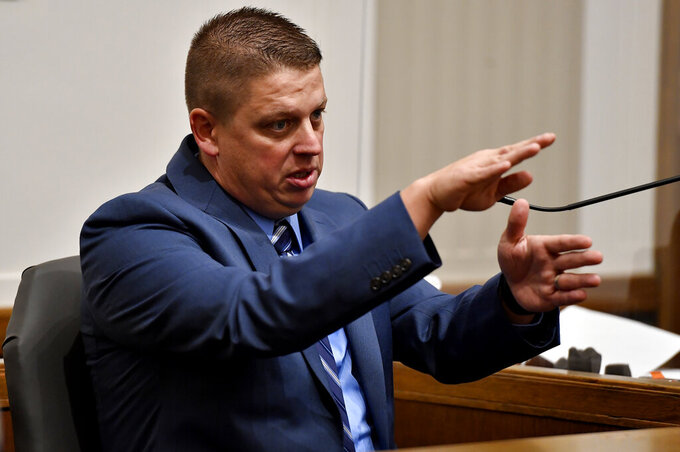 Rich Sugg, ASSOCIATED PRESS
FILE - Eric DeValkenaere, a Kansas City, Mo., police detective, who shot and killed Cameron Lamb after a chase, testifies on Nov. 10, 2021, at the Jackson County Courthouse in Kansas City, Mo., about what led up to the shooting of Lamb, who was backing his pickup truck into his garage. A verdict will be announced in the trial on Friday, Nov. 19, 2021. (Rich Sugg/The Kansas City Star via AP, File

KANSAS CITY, Mo. (AP) — A judge on Friday convicted a white Kansas City police officer of involuntary manslaughter and armed criminal action in the fatal shooting of a Black man, in a case in which prosecutors said police planted evidence.

Jackson County Judge Dale Youngs issued the bench ruling against Officer Eric DeValkenaere in the death of Cameron Lamb, 26. Lamb was shot while backing into his garage on Dec. 3, 2019, after chasing his girlfriend’s convertible in a stolen pickup truck.

Police said in a statement that following the verdict, DeValkenaere has been suspended without pay pending termination.

Youngs called it a tragic case with troubling facts and said DeValkenaere and the officer with him escalated a situation that had been calmed.

After the verdict, police escorted DeValkenaere and his family from the building. An officer said they wouldn't be commenting.

“Today will not bring him back. Justice is going to be short, but this is momentous. This is historic. And it means something,” Merritt said.

DeValkenaere testified during the trial that he fired after Lamb pointed a gun at another detective, Troy Schwalm, and that he believed his actions saved his partner's life.

Prosecutors, however, argued that police lacked a warrant to be on the property and staged the shooting scene to support their claims that Lamb was armed. Before he was shot, prosecutors said, Lamb had his left hand on the truck’s steering wheel and his cellphone in his right hand.

Another officer who was the first to arrive at the scene after the shooting testified during the trial that he didn’t see a gun on the ground below Lamb’s left arm, which was hanging out of the window of the truck. Later, though, a gun was there in police photographs.

Two bullets were found in Lamb’s pockets at the morgue, but crime scene technicians didn’t find them at the scene. And prosecutors also raised questions about whether Lamb, who was right-handed, could have used his left hand to pull a gun due to an earlier injury. The defense argued that he could have.

“What we sought in this case was a just outcome and I believe that’s where we stand today,” Jackson County Prosecutor Jean Peters Baker said after the ruling.

Youngs said the officers had no probable cause to believe that any crime had been committed, had no warrant for Lamb’s arrest and had no search warrant or consent to be on the property. He described police as the initial aggressors and said they had a duty to retreat, but DeValkenaere illegally used deadly force instead. He didn't address the allegations that evidence had been planted.

“I miss my baby and this just did not have to be," she said. "It did not have to be. My son was at his home and he was minding his own business when they took it upon themselves to go into the backyard. He was very needed not only to his family, but to the community.”

The verdict came after a bench trial, which was held before the judge without a jury at DeValkenaere’s request. DeValkenaere will remain free on bond until he is sentenced. A sentencing hearing hasn't been scheduled. He faces up to four years in prison.

The killing of Lamb, a father of three, was often invoked during racial injustice protests in Kansas City last year. And it was among several cases cited by a group of civil rights organizations in a petition urging U.S. Attorney General Merrick Garland to investigate the Kansas City Police Department. The indictment in the case came days after Lamb’s death garnered renewed attention stemming from his family’s meeting with then-President Donald Trump in 2020.

Darron Edwards, one of several local pastors who have led efforts to improve policing in the minority community, said he appreciated the ruling.

“There’s much hope that comes out of this for this family and for many who stand to come to the legal system to find the kind of justice that we all believe this county holds to,” Edwards said.

In the past year, prosecutors have brought criminal charges against five white Kansas City police officers for allegedly using excessive force against Black people. DeValkenaere was the only officer charged in an on-duty killing.

An earlier version of this story was corrected by deleting a reference to the case marking the first time a white Kansas City police officer was charged in the death of a Black person. Such a case happened in 1942.