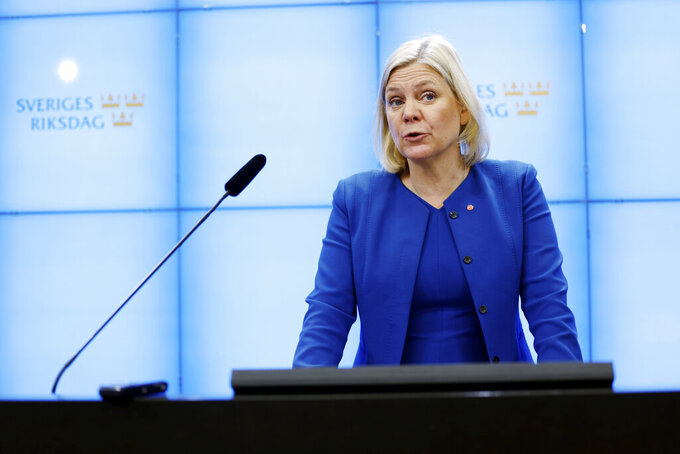 Fredrik Persson, ASSOCIATED PRESS
Sweden's Minister of Finance Magdalena Andersson and party chairman of the Social Democratic Party speaks, during a press conference after her meeting with the Swedish speaker of Parliament, in Stockholm, Thursday, Nov. 11, 2021. (Fredrik Persson/TT News Agency via AP)

COPENHAGEN, Denmark (AP) — Swedish Finance Minister Magdalena Andersson said Tuesday she needs more time to form a coalition government that could make her the country’s first female prime minister because discussions with one of the two support parties she needs has reached an impasse.

After intensive talks with the small Left Party, Andersson asked parliament speaker Andreas Norlen for an extension and was given until Monday to find enough support in the 349-seat Riksdag to form a Cabinet.

Andersson, the new leader of the Social Democratic Party, is seeking to secure the backing of the two smaller parties that supported Sweden's previous center-left, minority government led by Stefan Lofven. The other ally, the Center Party, has already said its lawmakers will abstain from voting against Andersson.

“It is important that we agree,” Left Party leader Nooshi Dadgostar told a press conference. “There have been discussions in good spirits."

Under the Swedish Constitution, prime ministers can govern as long as a parliamentary majority — a minimum of 175 lawmakers — is not against them. The Social Democrats currently hold 100 seats and the Greens have 16 seats. Together with their allies they have a total of 174 seats.

The right-wing of the Riksdag is divided. Ulf Kristersson, head of the opposition Moderate party — Sweden’s second-largest — repeatedly has said that a center-right government is not feasible because no mainstream party wants to cooperate with the third-largest Swedish party, the right-wing populist Sweden Democrats, which is rooted in a neo-Nazi movement.

On Tuesday, Andersson declined to give details about the ongoing talks with the Left Party, saying “all that is discussed in the negotiating room stays there.”

“It’s about being able to build trust,” she said.

“Sweden urgently needs a new government, but at the same time the work should not be rushed,” Norlen said after meeting with Andersson.

Lofven is still leading the Swedish government in a caretaking capacity until a new government is formed.