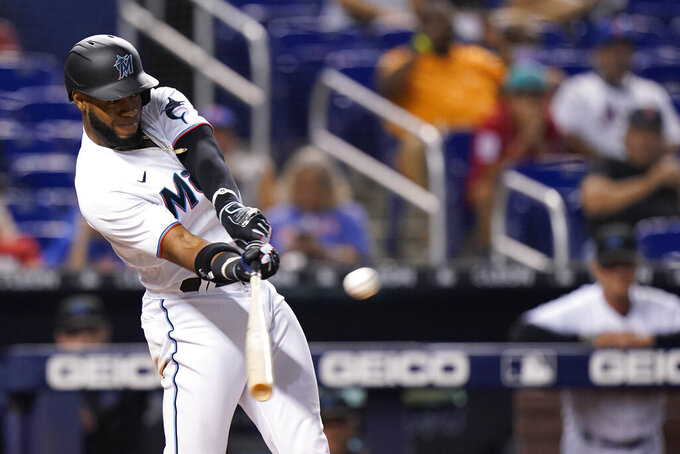 MIAMI (AP) — Bryan De La Cruz had three hits, including a game-winning single off the center-field fence in the bottom of the 10th inning that gave the Miami Marlins a 2-1 victory over the New York Mets on Wednesday night.

Miami starter Sandy Alcantara struck out a career-best 14 and allowed one run in nine innings. The right-hander gave up four hits, walked one and hit a batter with a pitch. His 114 pitches also were a career high.

“Everything was good today – my four-seam, two-seam, slider, changeup,” Alcantara said. “I had a great combination working.”

With two outs and first base open, Mets manager Luis Rojas made the questionable decision to let Díaz face De La Cruz, who raised his batting average to .342, rather than walk him and pitch instead to lefty-swinging Lewin Díaz, a .108 hitter.

“We always like Díaz. You trust your closer there in a matchup righty-righty,” Rojas said. “The one thing that gets Díaz in trouble is his command. We’ve seen that. We went with the matchup and trusted Díaz to get De La Cruz in that situation.”

The move certainly backfired as the third-place Mets (70-70) remained four games behind NL East leader Atlanta, which lost at home to Washington.

New York began the day 3 1/2 back for the league’s second wild card.

“We have to bounce back quickly after a tough loss like this,” Rojas said. “We just have to recover. We can’t hang our heads. We had some chances tonight and didn’t come up with the win.”

For De La Cruz, the game-winning hit helped overcome his previous at-bat, when he grounded into a double play to end the eighth.

Eight of Alcantara’s strikeouts came after the eighth inning. His fastball was clocked at 100 mph in the ninth.

“That was special tonight. His stuff was filthy,” Marlins manager Don Mattingly said. “That’s about as good as it gets.”

Conforto’s shot in the seventh tied it 1-all. Alcantara had limited the Mets to two hits and retired 10 straight before Conforto drilled a changeup into the seats in right-center for his 12th homer.

“You have to wait for the mistake fastball but obviously, he had command, he had stuff tonight,” Conforto said.

New York starter Rich Hill was lifted after six innings. The left-hander allowed one run, five hits, struck out eight and hit a batter with a pitch. Hill remains winless with the Mets since he was acquired from Tampa Bay on July 24.

Jackson’s RBI single in the second gave Miami a 1-0 lead. De La Cruz hit a one-out double, advanced to third on a groundout and scored as Jackson’s line drive got past leaping shortstop Francisco Lindor.

The homer to Conforto was the only costly mistake by Alcantara. When he faced him again in the ninth, Alcantara punctuated his performance by striking out Conforto.

“When I saw him coming to the box, I said, ‘This is the guy. He hit a homer off of me,'" Alcantara said. “I was really focused to get a strikeout and I did.”

Before Bender escaped the 10th unscathed, the Mets unsuccessfully challenged a pivotal call that Sánchez muffed Javier Baez’s fly ball in foul territory down the right-field line. The call was upheld and Báez ultimately struck out.

“I thought it was and I still think it was (fair),” Rojas said. “I looked at it in replay and it’s really hard to believe it wasn’t reversed to a fair ball. There’s nothing you can do but keep playing the game.”

Marlins: 1B Jesús Aguilar (left knee inflammation) was placed on the 10-day injured list. Aguilar was a late scratch Tuesday.