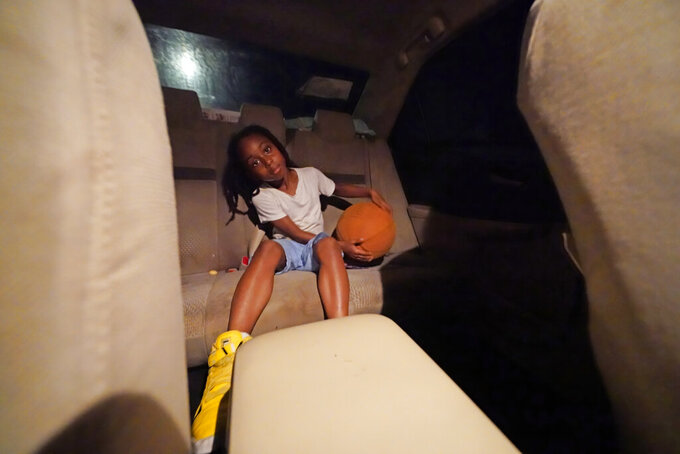 Gerald Herbert, ASSOCIATED PRESS
Jayden Harris, 6, sits in the backseat of his mother Jada Riley's car, after having to move out of her apartment days before, Thursday, July 28, 2022, in New Orleans. Eviction filings nationwide have steadily risen in recent months and are approaching or exceeding pre-pandemic levels in many cities and states. That's in stark contrast to the pandemic, when state and federal moratoriums on evictions, combined with $46.5 billion in federal Emergency Rental Assistance, kept millions of families housed. (AP Photo/Gerald Herbert)

The 26-year-old New Orleans resident was finally making a steady income cleaning houses during the pandemic to afford a $700-a-month, one-bedroom apartment. But she lost nearly all her clients after Hurricane Ida hit last year. Then she was fired from a grocery store job in February after taking time off to help a relative.

Two months behind on rent, she made the difficult decision last month to leave her apartment rather than risk an eviction judgment on her record. Now, she's living in her car with her 6-year-old son, sometimes spending nights at the apartments of friends or her son's father.

“I've slept outside for a whole year before. It's very depressing, I'm not going to lie,” said Riley, who often doesn't have enough money to buy gas or afford food every day.

“I don't want to have my son experience any struggles that I went through.”

Eviction filings nationwide have steadily risen in recent months and are approaching or exceeding pre-pandemic levels in many cities and states. That's in stark contrast to the pandemic, when state and federal moratoriums on evictions, combined with $46.5 billion in f ederal Emergency Rental Assistance, kept millions of families housed.

“I really think this is the tip of the iceberg,” Shannon MacKenzie, executive director of Colorado Poverty Law Project, said of June filings in Denver, which were about 24% higher than the same time three years ago. “Our numbers of evictions are increasing every month at an astonishing rate, and I just don’t see that abating any time soon.”

According to The Eviction Lab, several cities are running far above historic averages, with Minneapolis-St. Paul 91% higher in June, Las Vegas up 56%, Hartford, Connecticut, up 32%, and Jacksonville, Florida, up 17%. In Maricopa County, home to Phoenix, eviction filings in July were the highest in 13 years, officials said.

Some legal advocates said the sharp increase in housing prices due to inflation is partly to blame. Rental prices nationwide are up nearly 15% from a year ago and almost 25% from 2019, according to the real estate company Zillow. Rental vacancy rates, meanwhile, have declined to a 35-year low of 5.8%, according to the Census Bureau.

A report last month from the National Low Income Housing Coalition found that a tenant working full time needs to make nearly $26 per hour on average nationally to afford a modest two-bedroom rental and $21.25 for a one-bedroom. The federal minimum wage is $7.25 an hour.

“Landlords are raising the rent and making it very unaffordable for tenants to stay,” said Marie Claire Tran-Leung, the eviction initiative project director for the National Housing Law Project.

“Inflation has really shrunk the supply of housing that is available for people with the lowest incomes,” she added. “Without more protections in place, which not all states have, a lot of those families will be rendered homeless.”

Patrick McCloud, chief executive officer of the Virginia Apartment Management Association, said the trend is a return to normal. “No one likes evictions, but they are in some ways a reset to the economy,” McCloud said, adding that evictions have been “artificially depressed.”

"Housing is based on supply and demand. And when no one moves and you have no vacancies, you have a tight market and prices go up.”

Graham Bowman, a staff attorney with Legal Aid Society of Columbus, Ohio, said evictions there are rising — 15% above historic averages in June alone — at a time when there are fewer places for those forced out to go.

Sheryl Lynne Smith was evicted in May from her two-bedroom townhouse in Columbus after she used her rent money to repair a sewage leak in the basement. Smith, who is legally blind and has a federal housing voucher, fears she won't be able to find anything by September when the voucher expires because of rising housing prices and the eviction on her record.

“It's very scary,” said Smith, 53, whose temporary stay at a hotel funded through a state program ends this weekend.

In Boise, Idaho, Jeremy McKenney, 45, moved into his car last week after a judge sided with a property management company that nearly tripled the rent on his two-bedroom house. The Lyft and DoorDash driver will have to rent a hotel room whenever he has custody of his children, 9 and 12.

“It's definitely mind blowing,” said McKenney, adding that everything on the market is beyond his reach even after a nonprofit offered to cover the security deposit. “I have never been homeless before. I have always had a roof over my head.”

The other challenge is the federal emergency rental assistance that helped keep millions housed during the pandemic has dried up in some jurisdictions or been increasingly rejected by some landlords.

“What really gets me is there is rental assistance and so many landlords just don’t want it. They would rather throw someone on the street than take money," Eric Kwartler, managing attorney of Lone Star Legal Aid’s Eviction Right to Counsel Project, which covers Houston and Harris County in Texas. “If you take the money, you can't evict them. They want them out.”

The U.S. Treasury said last week that more than $40 billion of the $46.5 billion in Emergency Rental Assistance had been spent or allocated.

According to the National Low Income Housing Coalition, California, Connecticut, Massachusetts, Minnesota, North Carolina, and Virginia have gone through at least 90% of their first disbursement. Twelve states and the District of Columbia had used 50% of the second allocation, known as ERA2, by the end of May. Three — Idaho, Ohio and Iowa — haven't spent any ERA2 money and two — Nebraska and Arkansas — didn't accept the funds.

“The public health emergency may still be here but the funds to deal with it are rapidly disappearing,” said Martin Wegbreit, director of litigation for the Central Virginia Legal Aid Society.

Treasury is encouraging states and cities to tap other federal stimulus funds to cover the gaps. So far, over 600 state and local governments had budgeted $12.9 billion in stimulus funds to meet housing needs, including affordable housing development.

But, more needs to be done to ensure the country doesn't return to pre-pandemic times when 3.6 million tenants were evicted annually and “evictions were too often a first resort, not a last resort,” he told a forum on eviction reforms at the White House last week.

Other advocates called for permanent legal protections like right to counsel for tenants or eviction diversion programs to resolve evictions before they reach the courts.

Philadelphia, which passed a law making eviction diversion mandatory through this year, saw filings down 33%. The City Council in Philadelphia also approved spending $30 million over two years for rental assistance.

“We are trying to change the way we look at this issue in Philadelphia, where the only thing you do is go to landlord tenant court or start an eviction,” said Catherine Anderson, supervising attorney with Philadelphia Legal Assistance, who oversees the paralegals on the Save Your Home Philly hotline.

This story has been corrected to show that McKenney is from Boise, Idaho, not Boise, Utah.