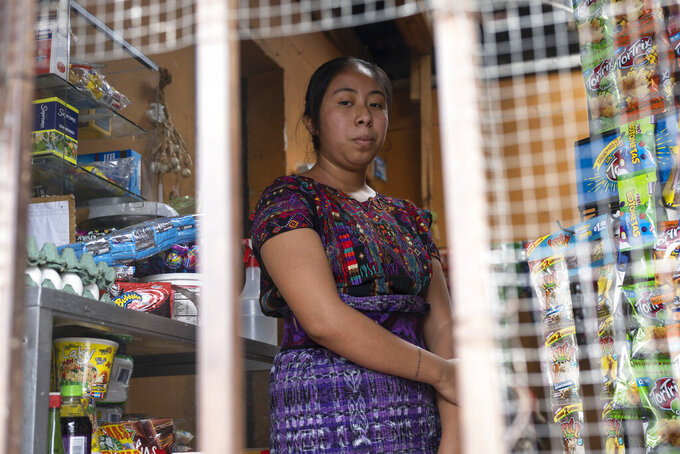 Moises Castillo, ASSOCIATED PRESS
Kakchiquel Indigenous Nancy Noj, 18, poses for a photo in the tortilla shop where she is employed, in Guatemala City, Tuesday, Oct. 5, 2021. Noj said she had only been working there for about a year. It is her aunt’s business. “I don’t see it like work, but rather like helping my aunt,” she said. (AP Photo/Moises Castillo)

GUATEMALA CITY (AP) — For millions of Guatemalan families handmade corn tortillas are indispensable with every meal, but many of those tortillas pass through the hands of girls and young women from impoverished families who work extraordinarily hours seven days a week.

Few if any are paid the official minimum wage, and some are paid nothing at all. They usually have no time to study and already face discrimination as Indigenous women from rural villages, so tortilla shops become dead-end jobs.

Those are among the findings of a study by the Pan American Development Foundation, a branch of the Organization of American States, that surveyed conditions in 292 tortilla shops in Guatemala City and four other cities across the country.

The conditions in the emblematic shops are a sort of microcosm of the hardships that face many in Guatemala, a nation where the rural poverty rate is near 75%, nearly 1 million children or adolescents are in the labor force and many Indigenous youths migrate to the cities seeking money to help their families.

The report found people 20 or younger – a few as young as 10 – working at 160 of the tortilla shops, and based its findings on interviews with 92 of them.

Most of those young workers identified as Indigenous Maya and 52 said they were under the age of 18, though it added that some others appeared to be younger than the age they reported.

The long work days, low wages and poor conditions in tortilla shops are “devastating” for youths, the study said. Roughly 60% reported working seven days a week. A similar percentage said they worked more than 11 hours a day around a blazing griddle in what are often tiny shops where they sleep as well as work, their beds hidden behind sheets hung from the ceiling.

None reported making Guatemala’s minimum wage of about $360 a month. Some said they earned as little as $65 a month, and some – apparently those working for their families – were paid nothing at all.

Sandra Alvarado works in a relative’s tortilla shop with her daughter María Elena. Alvarado said María Elena is 18 — the legal working age — though she looked far younger. Both sleep at the shop – which is common for workers who have migrated from the countryside.

María Elena said only that she doesn’t want to study and would rather work to help her family.

Florinda de la Cruz, a 20-year-old from northern Guatemala's Quiche province, also said that despite the heat, she preferred the tortilla shop to alternatives such as cleaning houses. “There, they don't let you rest, you are always working. My hands hurt, but this is better,” she said.

The predominance of women in the shops is part of a gender division that starts early. Boys go out to work in the fields and girls stay home to help around the house, which traditionally includes making tortillas.

It takes about a minute to grab a small ball of masa, the corn flour dough, roll it into a ball and flatten it to a round tortilla. Then they are cooked on a griddle, known as a comal. While there are some industrial tortilla makers, most Guatemalans prefer the fresh, handmade tortillas.

The Guatemalan version is thicker than most tortillas in Mexico, and both are usually tastier than the packaged industrial varieties sold at U.S. supermarkets. Handmade tortillas of local corn sell at a premium in Mexican street markets. Far more common are little neighborhood shops selling fresh tortillas that roll off rattling machines, a system that has not taken hold in Guatemala.

The low wages are critical to maintaining the affordable price of the tortillas — four sell for about 13 cents — and a change could spark social strife.

While greater numbers of Guatemalan women are going getting a formal education, discrimination, poverty and the need to support a family keep many – especially the Indigenous – out of school. And women still often lack support needed to continue their educations.

“So being a girl or a woman is a path filled with challenges and the pandemic deepened it,” said Ana Silvia Monzón, a sociologist studying women and gender at San Carlos University in Guatemala City.

Only a quarter of the 92 girls interviewed for the study said they were still studying while working, though the majority said they hoped to resume schooling at some point.

Nancy Noj, 18, who works at a tortilla shop in the capital, said she is only one year away from finishing high school with a forensic accounting specialty. She would like to study finance in college. For now, she tries to log into classes between mealtime rushes.

A member of the Kakchiquel Indigenous group, Noj said she had been working for a year at the business owned by her aunt. “I don’t see it like work, but rather like helping my aunt,” she said.

Still, Noj complained that her legs hurt from standing for long periods – one of many ailments the study said workers suffer, including headaches, burns, stinging eyes and back pain. Some shops use wood fires that can aggravate respiratory problems.

The study, financed by the U.S. Agency for International Development, recommended improving girls’ access to information so they can identify violations of their rights and know where to go for help. It also called for more educational and recreational programs for girls, better coordination among agencies responsible for child protection and specialized teams to inspect workplaces for violations.

“We need to continue demanding it of the state, because they must guarantee the protection of girls,” Monzón said. “Society also must stop looking the other way when it comes to this situation.”