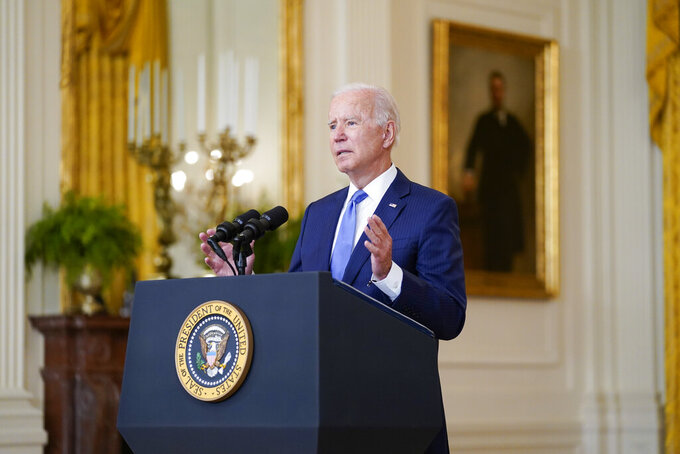 WASHINGTON (AP) — Boasting that government policies can make a difference in improving the economy, President Joe Biden went too far Thursday in taking credit for job growth since taking office.

He also made a dubious suggestion that wrongdoing is behind higher gasoline prices — something that his administration will seek to fix. But analysts say there is little evidence that is the case.

A look at his claims and the facts:

BIDEN: “When I was sworn in as president, the nation was struggling to pull out of the worst economic crisis since the Great Depression. Job growth was anemic, with just over 60,000 new jobs per month in the three months before I was sworn in. Then we went to work. We passed the American Rescue Plan back in March. And it worked; it’s still working. Over the last three months, we have created on average 750,000 new jobs per month.”

THE FACTS: Biden is taking more credit for his plan than it deserves.

The robust hiring since his inauguration largely reflects the reopening of the U.S. economy after a huge winter wave of coronavirus infections started to peak in January. Widespread vaccinations, which topped three million a day in the spring, played a key role in enabling restaurants, bars and entertainment venues to reopen and start hiring again. Airplanes filled up, as did hotels.

Biden’s $1.9 trillion financial rescue package, approved by Congress in March, did play an important role. By providing a third round of stimulus checks and extending an expanded unemployment benefits program through the first week of September, Biden’s plan goosed spending and the economy by putting more money in Americans' pockets.

But hiring slowed sharply i n August to a gain of just 235,000 jobs, as the delta variant drove case counts higher, underscoring the ongoing hold that the virus has on the economy.

BIDEN: “We’re also going after the bad actors and pandemic profiteers in our economy. There’s a lot of evidence gas prices should be going down, but they haven’t. We’re taking a close look at that.”

THE FACTS: There actually is little evidence something nefarious is behind the higher gasoline prices, as Biden suggests.

Gasoline prices indeed usually fall after Labor Day, after the peak summer driving season. While that hasn’t happened yet this year, analysts say other factors besides malfeasance appear to be in play. U.S. gasoline and oil prices, for instance, have been affected by a hurricane that temporarily shut most oil production in the Gulf of Mexico, several big refineries, and a major fuel pipeline to the East Coast.

The national average price for a gallon of gasoline is $3.19, according to the auto club AAA. That is unchanged from a month ago, though up a dollar from this time last year.

Gasoline prices usually track oil prices, and the price of benchmark U.S. crude is back close to its early-July highs after falling in August.

Jeffery Born, an energy-markets expert at Northeastern University, said current gasoline prices are partly a result of production and refining capacity that was knocked offline by Hurricane Ida and other factors – even a shortage of tanker drivers.

“In short, I think we are having supply-chain problems,” Born said. “I’m sure Joe wants prices to come down — you and I do, too. I’d also like to be 20 pounds lighter tomorrow.”

Phil Flynn, an energy analyst at the Price Futures Group and a critic of Biden’s energy policy, said prices reflect demand that came back stronger than expected from the pandemic and lower U.S. oil production, compounded by events like the hurricane.

“I’m not seeing any profiteering or bad actors,” Flynn said.

Tom Kloza, chief analyst for the Oil Price Information Service consulting firm, said Hurricane Ida and lingering effects on production and refining are causing summer-like prices to “linger for longer,” especially east of the Rockies. He predicted that pump prices will soon ease in the West, Southwest and Rocky Mountain states.

Energy economist Philip Verleger said gasoline prices are being propped up by U.S. independent producers and OPEC members limiting their oil production, by the cost of blending ethanol into gasoline and by lower gasoline inventories.

There already are some signs retail gasoline prices have peaked, with the Energy Information Administration reporting last week that gasoline prices are likely to decline in coming months. It forecast that prices would average $3.14 a gallon in September before falling to $2.91 in the last three months of the year, as driving declines in the winter months and refining operations come back online after being damaged by the hurricane.

Biden tried that approach himself last month, when he urged OPEC members to increase oil output just as concern was rising that higher energy prices could slow the U.S. economy’s recovery from the COVID-19 pandemic.

“Production cuts made during the pandemic should be reversed as the global economy recovers in order to lower prices for consumers,” Biden said at the time.