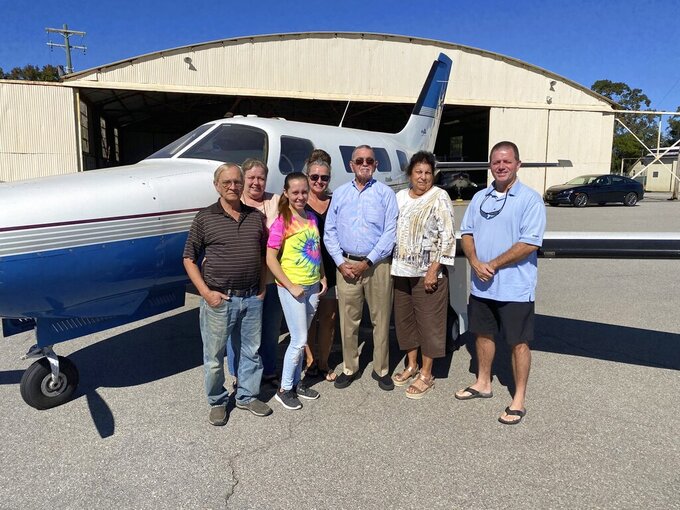 “I think it’s the greatest thing in the world that I ever did, other than give my life to God,” the 82-year-old said.

Joye has been doing what he loves for a long time.

He celebrated his 50th anniversary of flying on July 18.

The feat was recognized by the Federal Aviation Administration on Oct. 26.

The agency presented Joye with the Wright Brothers Master Pilot Award. The award is presented to those who have 50 years or more of practicing and promoting safe aircraft flight. Joye has about 30,000 hours of flight time.

“It means a whole lot to me,” Joye said of the honor. “It means I have gone 50 years and have not had a serious incident or accident. It is a big thing.”

“Your professionalism as an airman has contributed to the safety of our national airspace system and has enabled safe air travel by many Americans for more than half a century,” DeBerry wrote. “Congratulations on a very successful aviation career.”

The letter came with a lapel pin, a certified FAA Blue Ribbon package with Joye’s airman records/achievements and an award certificate.

Joye’s recognition will be posted on the electronic roll of honor online at the FAA Safety website.

Joye viewed the award presentation at the Orangeburg Municipal Airport, where he was once manager. He was surrounded by his family during the presentation.

During the award presentation Joye recalled his first solo flight out of Madrid, Spain, now over 50 years ago.

“I could not get my right leg to stay on the rudder pedals because it was bouncing up and down the whole time,” Joye said. “I was just nervous until my instructor got back into the aircraft with me. Then it stopped. Everything was good.”

His instructor’s name was Barb Snowden, who was the manager of the Torrejon Air Base aeroclub.

“He took me on and taught me flying,” Joye said. “I will forever be grateful to him.”

Joye said he just loves the idea of being in the air.

“I have had a chance to fly pretty good-sized jet airplanes and the very smallest of airplanes,” he said.

“You are responsible for getting people in the back from one place to another safely,” Joye said. And the weather can make flying tricky.

Throughout his flying career, Joye has enjoyed flying “small airplanes as much or almost as much as I do flying one of those big jets.”

When asked if he still flies, Joye said, “Oh yeah!”

“A friend of mine owns a twin engine airplane and I get a chance to fly with him sometimes,” he said. “I just fly and if I have to sit in right seat, I do. I just like to be there.”

“Mr. Aviation,” is how his wife Beverly describes him. “He would rather fly than eat when he is hungry. If you mention airplanes, he is all for it.”

She called the recognition “awesome.”

“A lot of pilots don’t reach 50 years and hang with it. He is still hanging in there. This is a major honor for him. This man loves to fly,” she said.

Joye is originally from Orangeburg but has lived throughout the area, including Branchville, Bamberg and Rowesville.

Joye’s love for flying started after he entered the United States Air Force in 1957.

While in the Air Force stationed over in Spain, he learned to fly and later became a flight instructor.

During his stint, he worked as an aircraft mechanic during the Vietnam War. He went to Arizona after Vietnam, working on F-100s and F-104s.

From there, Joye went to Ohio and helped develop the C-119 and C-130 gunships.

After retiring from the Air Force as a senior master sergeant, he started teaching as an automotive mechanic instructor. He later worked as a corporate pilot and flight instructor, which he still does.

Joye decided to become a flight instructor so he could earn money while continuing to enjoy flying.

“I never had any desire to go to work for the airlines,” Joye said. “I still enjoy teaching.”

Joye also worked for Belk Hudson for a time, flying a Piper Navajo.

He recalled getting into the plane in Florida with Mr. Hudson and wondering about a certain switch on the plane’s panel.

“It did not seem to belong in the airplane,” Joye said. “We could not find it in the POH (pilot’s operating handbook). We were talking about that thing and Mr. Hudson’s mike was shorted out.”

“The controller down there was listening to everything we said,” Joye continued. “He broke in and said, ‘You guys ought to learn to fly that airplane and learn about all the equipment it has before you get up in there.’ That was comical.”

Joye has been recognized for his flying experience before.

In the fall of 1995, nominated by former student Raymond S. Graule, Joye was named “Certified Flight Instructor of the Year” by the FAA.