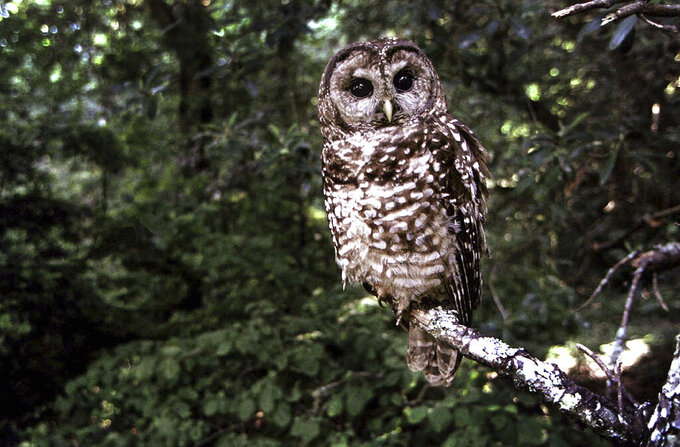 Tom Gallagher, ASSOCIATED PRESS
FILE - A northern spotted owl sits on a branch in Point Reyes, Calif., in June 1995. A federal judge on Tuesday, July 19, 2022, threw out a host of actions by the Trump administration to roll back protections for endangered or threatened species, including the northern spotted owl, a year after the Biden administration said it was moving to strengthen such species protections. (AP Photo/Tom Gallagher, File)

The move was the latest by the U.S. Fish and Wildlife Service undoing changes to the Endangered Species Act that industry and landowner groups had won under Trump. President Joe Biden ordered a broad review of his predecessor's environmental policies after taking office in 2021.

One Trump measure required regulators not to designate areas as critical habitat if there would be greater economic benefit from developing them.

That forced the agency to disprove “speculative claims of economic harm made by industries such as mining, logging, and oil and gas" as they sought to extract resources from public lands, said Earthjustice, a law firm that represents environmental groups.

In a 48-page document explaining withdrawal of the rule, the agency said it gave outside parties an “outsized role” in determining which areas were needed for preserving imperiled species while undermining the Fish and Wildlife Service's authority.

"The Service is the federal government’s lead agency on endangered species, responsible for conserving the nature of America for future generations,” agency Director Martha Williams said.

Returning to the pre-Trump policy, she said, would make “sound science and citizen participation” the basis of habitat decisions.

Under the 1973 law, federal agencies cannot fund, permit or take actions that would destroy or severely damage critical habitats. It doesn’t restrict activities on private land unless government approval or financial support is involved.

It allows regulators to deny critical habitat designation to areas after considering economic and national security issues, and other factors such as conservation activities underway in such areas.

In some cases, the designation "can discourage conservation and restoration by making habitat a serious liability for landowners, whose property values can plunge up to 75 percent,” The Property and Environment Research Center, a landowner advocacy group, said in a statement.

“Instead of simply reversing the Trump administration’s flawed rule, the Fish and Wildlife Service should reform the critical habitat process to focus on creating the right incentives for landowners to actively conserve and restore habitat," said Jonathan Wood, the group's vice president of law and policy.

Earthjustice said the Biden administration's action would return the focus to imperiled species instead of “the self-interest of destructive industries.”

The Biden administration in June withdrew a Trump rule that prevented agencies from selecting for protection areas that don’t presently meet a species’ needs but might in the future as a result of restoration work or natural changes, including global warming.

A federal judge this month threw out a number of Trump actions to roll back protections for endangered or threatened species.

This story was first published on July 20. It was retransmitted on July 21 to correct a quote from Earthjustice. The group said the Trump regulation had forced the federal agency to disprove “speculative claims of economic harm made by industries,” not “environmental harm.”