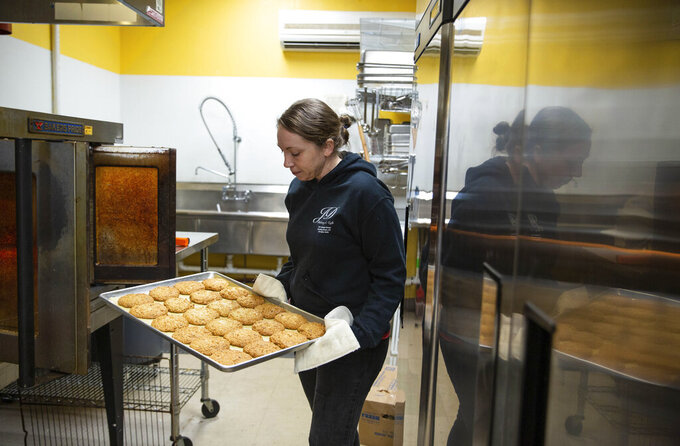 Grace Ramey, ASSOCIATED PRESS
JD's Bakery & Cafe owner Joni Warren pulls a tray of her Ranger cookies out of the oven at the bakery's new location at the former Chickadee's space in the Twin Oaks shopping center in Bowling Green, Ky., on Tuesday, Nov. 9, 2021, as she and her coworkers prepare for the grand opening Wednesday morning. (Grace Ramey/Daily News via AP)

BOWLING GREEN, Ky. (AP) — One of Bowling Green’s most popular food trucks will soon be ditching its wheels and returning to its roots as a brick-and-mortar restaurant.

JD’s Mobile Kitchen and Bakery won’t be so mobile anymore, with owners Joni and Michael Warren opening a storefront this week at 1200 Smallhouse Road in the former Chickadee’s restaurant space and planning to offer the same type of carryout food service that Chickadee’s provided.

“It will be very similar to what Chickadee’s had, with ‘grab-and-go’ sandwiches and salads,” Joni Warren said. “We’ll also bring back the baked goods we had at our downtown location.”

That downtown JD’s Bakery and Cafe, which was at 931 College St., operated from 2011 through 2016 and developed a following before the Warrens briefly got out of the restaurant business.

Michael Warren said the food truck, which has been operating for about a year and was voted “Best Food Truck” this year in the Daily News’ “Best of Bowling Green” poll, helped steer the couple back into the meals-without-wheels business.

“The food truck has helped build the brand,” he said. “A lot of new people have taken to it.”

So much so that the Warrens said the truck will be phased out gradually.

Joni Warren, who began as a teenager making baked goods and selling them at farmers’ markets, came up with the idea of moving into the Chickadee’s space.

“We were going to put an extra kitchen at our house to support the food truck,” Joni Warren said. “This (Chickadee’s) popped up, and I thought about it for a while before asking Michael. He said, ‘That’s a great idea.’ ”

The opening of the new JD’s will line up with Joni Warren’s past. She said the JD’s on College Street opened Nov. 10, 2011, exactly 10 years before the new restaurant’s opening.

“The dates lined up pretty close,” said Joni Warren, who grew up on a Logan County farm and learned her baking skills from her mother and grandmother.

She said the new eatery will offer sandwiches on the same homemade bread that was a staple at the downtown JD’s.

Joni Warren said the restaurant will offer a variety of sandwiches that will include a roast beef Manhattan, turkey, ham, chicken salad, club and grilled cheese.

She said the eatery will also offer lasagna, chicken pot pie, soups and “lots of desserts.”

The new JD’s will be open from 11 a.m. until 6 p.m. initially, Joni Warren said, but will eventually be open for breakfast.

She also plans to carry the milk produced and processed at her father’s JD Country Milk operation in Logan County.

Michael Warren, who works at Unipress in Portland, Tenn., and helps his wife part-time, sees the new “take-and-bake” restaurant as a good way to build on the following the food truck has established.

“Back in July, we had the entire calendar booked,” he said. “Joni never had to ask somebody if she could set up. They would ask her.

“This (the new location) is going to be fun.”