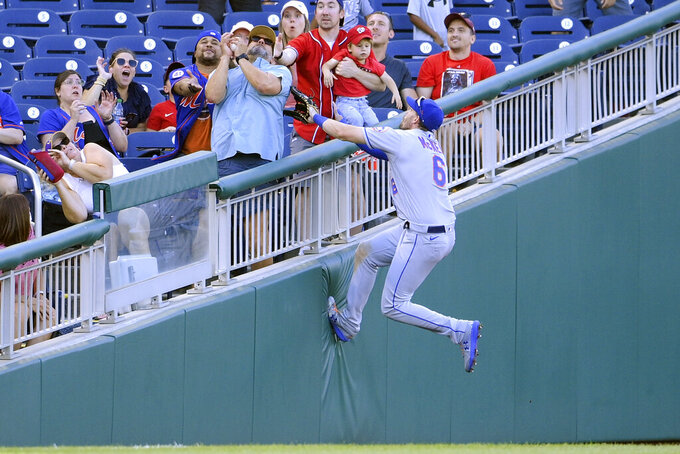 The Mets won the opener 11-9, blowing a nine-run lead before bouncing back on Francisco Lindor's two-run homer in the ninth inning.

New York began the day four games behind Atlanta in the NL East and four games back of Cincinnati for the second wild-card spot after a surge to start September helped it climb back into the standings.

“Kudos to the guys,” Mets manager Luis Rojas said of the streak. “We had some things that could have distracted the team from playing these games right and winning some games. They just focused in on what they needed to focus in.”

Michael Conforto put the Mets ahead in the nightcap with an RBI single in the first. Thomas homered to lead off the bottom of the first and Carter Kieboom’s single gave the Nationals a 2-1 lead.

Washington starter Josh Rogers (1-0) earned his first big league win since 2018 — that was the last year he started a game in the majors, with Baltimore.

Rogers cruised through five innings on 76 pitches and often hopped off the mound after an inning was finished. The 27-year-old lefty also celebrated getting a sacrifice bunt down in the fifth to move Luis García to third. García scored on Escobar’s second home run of the season.

Rogers was demonstrative throughout the game and had a slew of family members in the stands, including his mom, dad, grandmother and brother.

“I was just going to be myself,” Rogers said. “I had a ball. I had so much fun in the dugout and so much fun on the mound.”

Kevin Pillar’s 13th home run of the season pulled the Mets within 4-3 in the sixth, and Rogers’ night finished a batter later. In his Nationals debut, he allowed three runs in 5 2/3 innings and struck out five.

Kyle Finnegan pitched the ninth for his seventh save after taking the loss in the opener. He struck out Pete Alonso looking with the tying run on second to end the game.

“I told him if we get in a situation where he has a chance to close the game out, I want him on the mound,” Nationals manager Dave Martinez said.

Ahead 9-0 in the fourth inning of the first game, the Mets saw the Nationals force extra innings on Andrew Stevenson’s two-out, two-run homer in the seventh that made it 9-all.

Mets reliever Trevor May (7-2) escaped a bases-loaded, one-out jam in the eighth. Lindor then led off the ninth with his 12th homer, connecting against Finnegan (4-6) to also score the automatic runner from second.

Heath Hembree pitched the ninth to record his ninth save.

The Mets have never blown a lead of more than eight runs in a loss, and barely avoided doing it this time.

“There’s not a comfortable lead at the big league level,” Rojas said. “There’s not. We’ve got to be aware of that.”

The Mets squandered a 2-0 lead in the bottom of the ninth Friday night before recovering to win 6-2 in the 10th.

Nationals: RHP Tanner Rainey (left side soreness) has not pitched since Aug. 12 for Triple-A Rochester. Martinez expects to talk with Rainey on Monday about whether he will finish the season pitching or will be shut down. Rainey was expected to be a key factor for the Nationals’ bullpen this season, but had a 7.62 ERA before being sent down.

Mets: OF Brandon Nimmo (hamstring strain) was placed on the 10-day injured list in between games during Saturday’s doubleheader. Nimmo strained his hamstring when running the bases in the opening game.

RHP Taijuan Walker (7-9, 3.89 ERA) takes the mound for the Mets in the fourth game of the five-game series on Sunday. RHP Josiah Gray (0-2, 4.73) makes his seventh start for Washington since being acquired as part of the blockbuster trade that sent Max Scherzer and Trea Turner to the Los Angeles Dodgers.