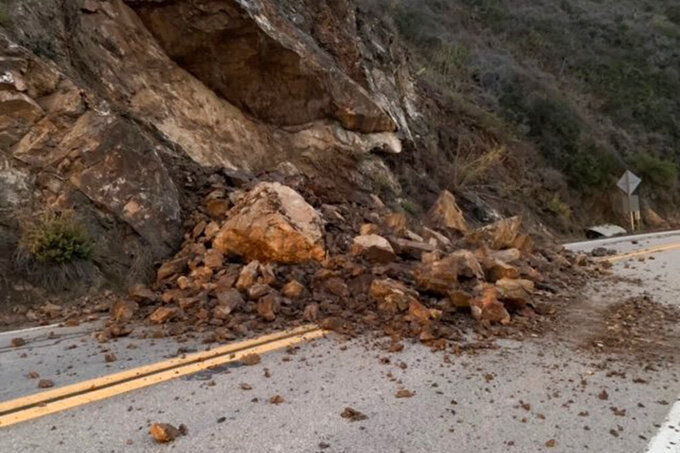 Uncredited, ASSOCIATED PRESS
In this photo provided by Caltrans, is a rockslide on the central coast that forced closure of a long stretch of Highway 1 near Big Sur, Calif., on Wednesday, Oct. 27, 2021. The closure extended from Ragged Point in San Luis Obispo County to Fullers Point in Monterey County, Caltrans spokesperson Jim Shivers said in a social media post. There was no estimate for when the road would be reopened. (Caltrans via AP)

The closure extended from north of the Ragged Point Inn in San Luis Obispo County up to Gorda in Monterey County, Caltrans spokesperson Jim Shivers said in a social media post.

A photo showed large boulders covering much of the roadway.

“Rocks above the highway are being assessed by Caltrans with estimates of a one-week closure,” Shivers said.

Highway 1 is a major scenic route for tourists traveling between Los Angeles and San Francisco. Ragged Point Inn is about 20 miles (32.19 kilometers) north of Hearst Castle at San Simeon.

The slide came two days after a powerful storm hit California. Past storms have caused significant damage to the road clinging to steep coastal slopes.