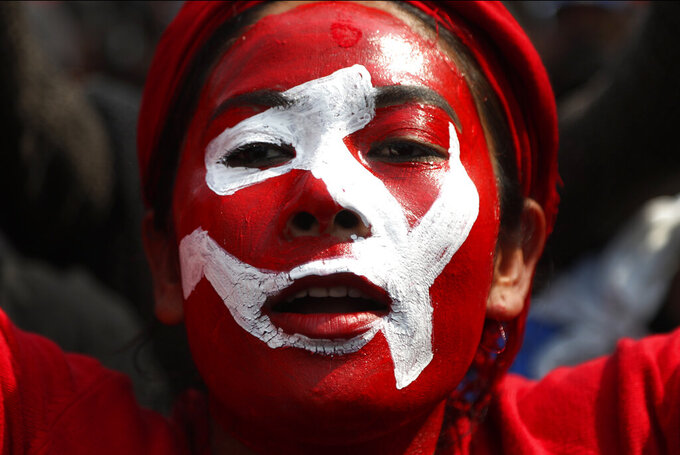 Niranjan Shrestha, ASSOCIATED PRESS
A Nepalese supporter of a splinter group in the governing Nepal Communist Party participates in a rally to celebrate the Supreme Court order in Kathmandu, Nepal, Wednesday, Feb. 24, 2021. Nepal's Supreme Court on Tuesday ordered the reinstatement of Parliament after it was dissolved by the prime minister, in a ruling likely to thrust the Himalayan nation into a political crisis. (AP Photo/Niranjan Shrestha)

The court order was major blow to troubled Prime Minister Khadga Prasad Oli, who dissolved the legislature in December because of a feud within the governing Nepal Communist Party.

The jubilant demonstrators applauded the court's decision and demanded Oli's immediate dismissal. The court ruled on Tuesday that the dissolution was unconstitutional and that a meeting of the reinstated body must be called within 13 days.

Oli has not made any public comments since the ruling, which has put him in a difficult position because he will not have the support of a majority of lawmakers.

The Nepal Communist Party won a majority of the seats in 2017 elections, but has split following a feud between Oli and co-leader Pushpa Kamal Dahal.

Without the support of Dahal's splinter group in Parliament, Oli would have difficulty remaining in office. However, no party holds a majority to form a new government, which is likely to lead to a political crisis.

Since Parliament’s dissolution in December, there have been regular street protests against Oli by tens of thousands of people in Kathmandu and other cities.