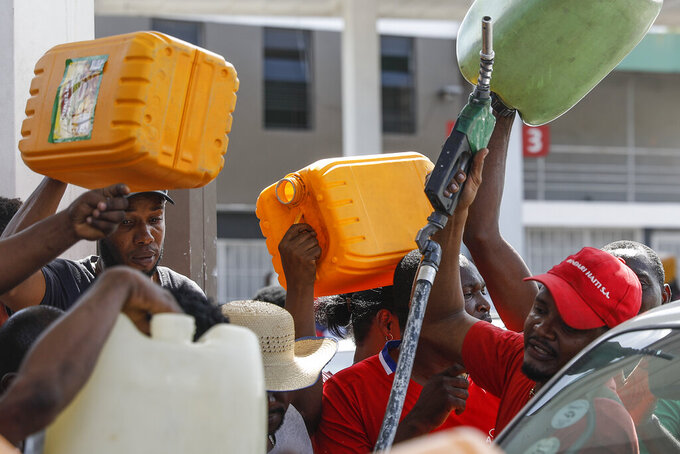 Odelyn Joseph, ASSOCIATED PRESS
People push and shove as they try to get their gas tanks filled at a gas station in Port-au-Prince, Haiti, Sunday, Nov. 14, 2021. (AP Photo/Odelyn Joseph)

PORT-AU-PRINCE, Haiti (AP) — A Haitian businessman considered a suspect in the July 7 assassination of President Jovenel Moïse was arrested in Turkey, authorities in Haiti announced Monday.

Haitian Foreign Minister Claude Joseph said on his Twitter account that he spoke with his Turkish counterpart about the arrest of Samir Handal, but gave no more details, including whether Haiti would seek the man's extradition.

Handal has been mentioned as a suspect in the plot to kill the president, although the government has not given any specifics about his alleged involvement.

More than 40 suspects have been arrested so far in the presidential slaying, including 18 former Colombian soldiers and several Haitian police officers. Colombian authorities have said the majority of its former soldiers did not know the true nature of the operation they were hired to participate in.

In October, another Colombian man was arrested in Jamaica.

Moïse was shot at his private home in a pre-dawn attack in which his wife, Martine Moïse, was wounded.

The presidential killing deepened the political instability in the country, which also since then has been trying to recover from a magnitude 7.2 earthquake that killed more than 2,200 people in Haiti’s southwestern region in mid-August, a spike in gang-related violence and a severe shortage of fuel.