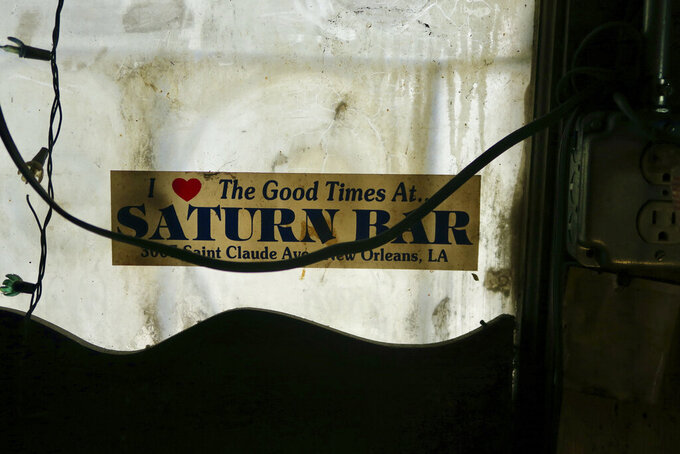 Ian McNulty, ASSOCIATED PRESS
An old bumper sticker in the window of Saturn Bar, which is now preparing to reopen later in 2021. (Ian McNulty/The Times-Picayune/The New Orleans Advocate via AP) 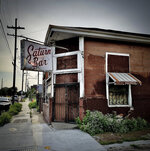 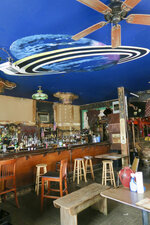 NEW ORLEANS (AP) — In the constellation of quirky, wonderfully weird New Orleans bars, the Saturn Bar was in an orbit all its own.

A product of age, weather, clutter, and a gruff but undeniably compelling presence, it was a bar that couldn’t happen just anywhere.

So, when its family owners last year decided to leave the business and put the property up for sale, many feared it marked the end for another beloved New Orleans original.

But now, the new owners say they plan bring the bar back -- just the way it was.

Heather Lane and Phil Yiannopoulos completed a purchase of the Saturn Bar last week from the Broyard family, who for three generations had run the business on the corner of St. Claude Avenue and Clouet Street. The sale includes the property and the business name.

The married couple, in their 30s, have some hospitality experience. But they bought the bar mostly because of the fun they had there, and their fear that the beloved dive bar might go away for good.

Saturn Bar has been closed since bars were first shut down in the coronavirus crisis in March 2020. The new owners hope to reopen it by September, after some repairs to the property.

“We’ve lost other places and seen how fast that can happen. We didn’t want that to happen to the Saturn Bar,” said Yiannopoulos.

A few days after the sale, the couple was at the bar sorting through the many pieces of art and found objects that came with the building, while their dog Ziggy Stardust napped by a row of old theater seats with leopard print cushions.

The bar doubled as an art installation for a collection of paintings by Mike Frolich dating to the 1960s, which covered some of the walls. Those works were not included in the sale.

The new owners plan to bring in more art for the spaces where Frolich’s work had been. For that, they’re looking to others who share their affinity for the corner bar.

“I think it’s an opportunity for the neighborhood to fill it with art,” Lane said.

Through different, sometimes interwoven chapters of its history, the Saturn Bar has been a workingman’s watering hole, an ad hoc boxing ring, an artistic oddity, an end-of-the-night destination, and, more recently, a music venue.

Lane and Yiannopoulos said bringing back music is an important part of their plan.

The year 2020 was supposed to mark the 60th anniversary of the Saturn Bar. But instead, the pandemic made the Broyard family reassess their future in the business and ultimately decide to put it up for sale, said Eric Broyard, its second-generation owner.

A sale was pending in November, though that deal fell through. Soon the property hit the market again and Lane and Yiannopoulos were able to close the deal.

“I’m glad the name is going to stay there, it’s been in our family for a long time,” said Broyard. “I hope they do real good with it.”

The corner bar started life as a grocery store and became a succession of bars under different names until 1960, when O’Neil Broyard took it over and the Saturn era began. Back in the early days, it had a boxing ring in the back room, the late Broyard once told veteran newspaper columnist Angus Lind.

It became a neighborhood standby that was as raffish and ratty as any dive, but with its own expressive character -- an unscripted incarnation of New Orleans funk.

Things piled up here, creating an untidy collection of trash and treasure over practically every surface, like some hallucinatory rummage sale. A house cat prowled the rooms. Stacks of newspapers and old boxes doubled as cocktail tables.

An ancient jukebox played 45 RPM records, belting out hits by Roy Orbison or Frank Sinatra, but the look around the place was decidedly more pack rat than Rat Pack.

Over all the cluttered curios were paintings by Frolich, a collection of feverish, phantasmagoric scenes, from landscapes to demons to ominous visions.

O’Neil Broyard died in the months after Hurricane Katrina, but the Broyard family kept the bar going.

When they separated some of the artifacts from the outright trash that had built up inside the bar, they created space in the back room for bands.

In the years after Katrina the bar became a regular venue for music, hosting everything from DJ dance parties to a sea shanty singing group to thrash metal bands.

Lane and Yiannopoulos hope to reopen the bar in time for Saints season. When it kept daytime hours, it had its own scene on game days, and that is something they want to rekindle as well.

“It’s just bringing back that sense of tradition that you share with the same group of people doing the same things,” said Lane.

Every time the couple brings up the Saturn Bar, it draws out stories from locals, they said. So many different people seem to have their own connection and even attachment to the old place. That has been a validation of the decision to take it on, Lane said.

Their plans are for a revival, not a revamp or transformation. Repairing the two art deco light fixtures that once held glowing, Saturn-like rings of neon over the bar is one task ahead, for instance.

“This will not be a curated space,” Lane said.

They already have one idea for the drink menu. A panel over the bar will list the prices for beers and mixed drinks. But for cocktails, it will list recommendations for other bars better suited to those more intricate requests, maybe Ste. Germain just across the street or Cure on Freret Street.

“When we tell people that, the common response is ‘oh good, you get what this place is supposed to be about,’” said Yiannopoulos. “It’s not going to be fancy.”