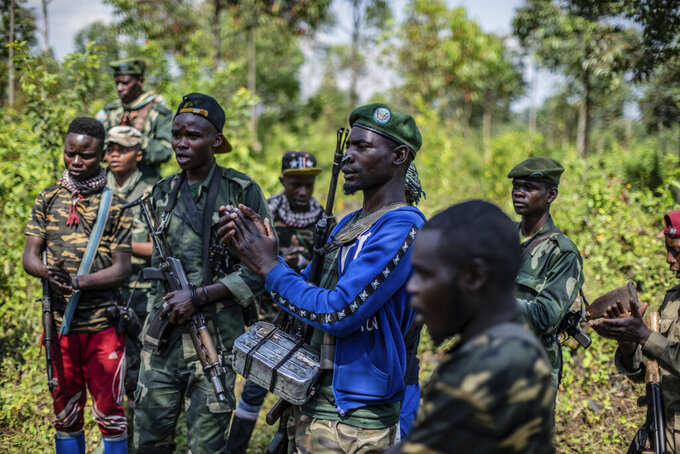 Moses Sawasawa, ASSOCIATED PRESS
Armed militiamen gather near Rutshuru, 70 kms (45 miles) north of Goma, Democratic Republic of Congo,Wednesday June 22, 2022. Earlier in the week, East Africa's leaders have responded to the threat of war between Rwanda and Congo by instructing a new regional force to deploy in eastern Congo and ordering an immediate cease-fire. A statement after the meeting in Kenya's capital does not give details on the date of deployment of the force or its composition. (AP Photo/Moses Sawasawa)

Congolese officials have asserted that M23 is backed by Rwanda, and have accused the much smaller neighbor of occupying Congolese territory.

“They will be discussing Rwanda’s aggression in Congo,” Muyaya said by phone. Asked whether Congo still believes Rwandan troops are fighting alongside M23 rebels in eastern Congo, Muyaya replied, "That is obvious."

Rwanda has long denied supporting M23, disputing the accounts of conflict observers, U.N. experts and others. M23 is made up mostly of ethnic Tutsi fighters from Congo who say their government hasn’t honored past commitments to reintegrate them into the national army.

The African Union earlier this year asked Angola's president to mediate the Congo-Rwanda dispute. A Catholic cardinal in Kinshasa, the Congolese capital, is calling for the pope's involvement in peace efforts.

Tshisekedi said last week that his efforts to make peace with Rwanda should not be seen as a sign of weakness. But some within Congo are opposed to any talks while M23 rebels continue to occupy Congolese territory.

Congo has always denied supporting the group commonly known by its initials as FDLR.

“That is the same story for 20 years ago. Why would Congo be supporting them to shell Rwanda territory? Those accusations are not true," Muyaya said. “We have to deal with hundreds of armed groups inside the country and we have been talking to all neighbors about a common strategy to end foreign armed group activities.”

It remains unclear when the force, which would be authorized to disarm insurgents like M23, will be deployed.