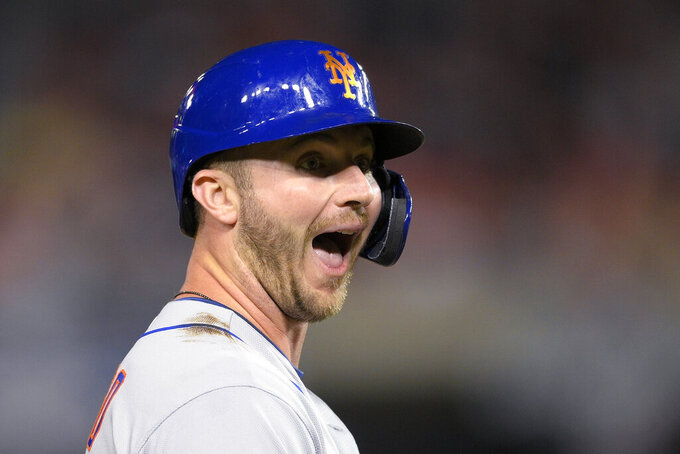 WASHINGTON (AP) — Kevin Pillar drove in two with a 10th-inning double and the New York Mets recovered after blowing a late lead to beat the Washington Nationals 6-2 Friday night for their fifth straight win.

The surge bailed out closer Edwin Díaz (5-4), who allowed two runs in the ninth, the first he has allowed since Aug. 6.

“As you can imagine, it’s great. It’s awesome to rip off (five) in a row,” Alonso said.

The Mets are four games behind Cincinnati for the second wild-card spot and four games behind Atlanta for the NL East lead. Their five-game winning streak doesn’t include a win completed Tuesday in the resumption of an April 11 game postponed by rain against Miami.

The throw home forced Mets catcher Chance Sisco up the third-base line and into Stevenson’s path. Stevenson’s knee slammed into Sisco, forcing Stevenson into the air and wide of home plate. He jumped back to touch the plate and tie it while Sisco writhed in pain. Sisco was replaced by Patrick Mazeika.

The win helped New York improve its emphatic home-road splits: The Mets are 41-27 this season at Citi Field and 26-40 on the road.

“We just have to win every possible game that we can,” Alonso said. “Regardless of the standings, we can only control what we can control.”

Washington has lost six consecutive games. The Nationals are 7-22 since their sell-off at the July 31 trade deadline.

Michael Conforto’s single drove in Javier Báez to put the Mets in front 1-0 in the second. Alonso’s triple scored Brandon Nimmo in the third.

Martinez was back in the dugout Friday after having an ankle “procedure” done Thursday morning. Martinez used crutches to reach his preferred bench perch to manage the game, then sat with his leg out and a soft cast around his left foot. Bench coach Tim Bogar managed the Nationals on Thursday night and handled on-field managing duties, like pitching changes, on Friday.

Nationals: RHP Kyle McGowin (right elbow) was placed on the 10-day injured list. McGowin felt something “weird” in his right elbow when throwing a bullpen session Thursday, according to Martinez. An MRI revealed a sprained UCL. McGowin will see a specialist before determining the next steps. Kyle Finnegan was reinstated from the paternity list to take McGowin’s place.

Mets: OF Dominic Smith was placed on the bereavement list Friday. Newly acquired reliever Brad Hand was activated to take Smith’s roster spot. The timetable for Smith’s return is unknown. Manager Luis Rojas said Smith was “in between” on going to join his family, but decided to leave Friday morning.

Nationals: RHP Erick Fedde (6-9, 5.08 ERA) will pitch Game 1 on Saturday. Washington is yet to determine its Saturday night starter.