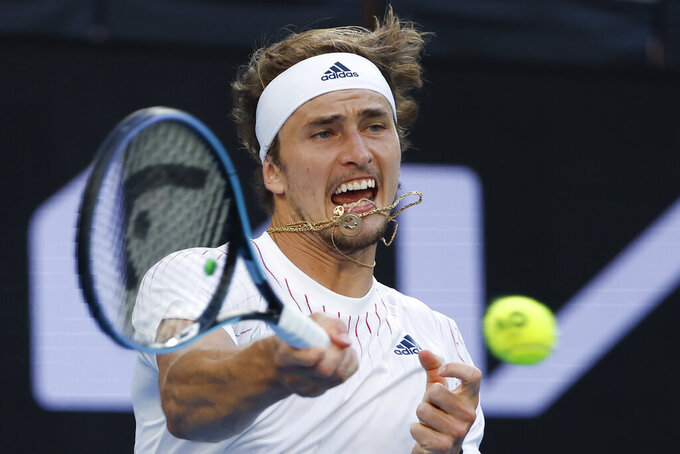 Hamish Blair, ASSOCIATED PRESS
FILE - Alexander Zverev of Germany plays a forehand return to Radu Albot of Moldova during their third round match at the Australian Open tennis championships in Melbourne, Australia, Friday, Jan. 21, 2022. The French Open is scheduled to start Sunday on the red clay of Roland Garros on the outskirts of Paris.(AP Photo/Hamish Blair, File)

PARIS (AP) — Some of the men to watch at the French Open, which begins Sunday at Roland Garros:

Aces: After legal saga over whether he could stay in Melbourne despite being unvaccinated, was eventually deported and so unable to try to defend his title at the Australian Open in January. ... Also missed two big tournaments in the United States this year because he could not travel there as a foreigner who has not received shots against COVID-19. ... Currently is tied with Roger Federer for the second-highest Grand Slam title total among men, one behind Rafael Nadal. ... Went 27-1 at majors in 2021, coming within a loss in the U.S. Open final of becoming the first man since Rod Laver in 1969 to win a calendar-year Grand Slam.

The Draw: Could face Rafael Nadal in the quarterfinals.

He Said It: “I’m in the right direction. I know I can always play better, and I know that I’m very self-critical on the court. At the same time, realistically looking, I think the tennis — quality of tennis, level of tennis — is really high now.” — Djokovic, offering an assessment of his game before the Italian Open in May.

Aces: Won the men’s singles gold medal at the Tokyo Olympics in 2021. ... Lost to Dominic Thiem in a fifth-set tiebreaker in the 2020 U.S. Open final after taking a two-set lead. ... Still has issues with the “yips” on second serves. ... Brought aboard 1993-94 French Open champion Sergi Bruguera for coaching help. ... ATP Tour announced in October it is investigating allegations of abuse brought by a former girlfriend of Zverev’s. ... In March, he was put on probation for a year by the ATP for hitting the chair umpire’s stand with his racket after a match.

The Draw: Could face No. 6 Carlos Alcaraz in the quarterfinals.

He Said It: “I hope the whole thing is coming to an end at some point, and then I can also play calmly and be focused with my tennis.” — Zverev, discussing the tour's ongoing investigation.

Aces: A year ago at Roland Garros, became the youngest man to make it to the final of a Grand Slam tournament in more than a decade. Took a two-set lead against Djokovic before losing in five. ... Each of his past four French Open appearances ended with losses to men who have won at least one Grand Slam title: Djokovic twice, Stan Wawrinka and Dominic Thiem. ... Reached the semifinals at four of the past six majors.

The Draw: Will face Lorenzo Musetti, who pushed Djokovic to five sets a year ago in Paris, in the first round.

He Said It: “Hopefully I can really remain the same, consistent and focused ... the way I’ve been trying to perform the last couple of years. Every single one of them is more challenging than the year before.” — Tsitsipas, asked about his place in the tennis hierarchy.

Aces: Leads the way with 21 Grand Slam singles titles after breaking a tie with Djokovic and Federer for the men's record by winning the Australian Open in January. ... Played only two matches from June through the end of last season because of chronic pain in his left foot, tested positive for COVID-19 in December, then after beginning season 20-0, missed time with a rib injury. Left foot bothered him again during loss in Rome in May. ... 105-3 French Open record means he's always among the favorites, if not THE favorite. ... Spent more than 17 years ranked in the top 10.

The Draw: Could face 2015 French Open champion Stan Wawrinka in the second round.

He Said It: “At my age, when you start having more problems than what you can manage, of course it's tough — without a doubt, no? Body issues, pains, you can manage that. The problem is when you start to feel that with all the things that’s going (on with) your body, you can’t be competitive enough to fight for the things that really keep exciting you.” — Nadal, on the state of his health and his game.

Aces: A popular pick to win his first Grand Slam title in what will be only his sixth appearance at a major. ... Moved into the top 10 of the ATP rankings in April, while still 18, the youngest player to do so since Nadal in 2005. ... Beat Nadal and Djokovic in consecutive matches en route to the title at the Madrid Open in May, the first player to beat those two giants of the game at the same clay-court tournament. ... After winning Madrid, decided to skip Rome to rest and recover ahead of Roland Garros. ... Coached by 2003 French Open champion Juan Carlos Ferrero.

The Draw: Could face Djokovic or Nadal in semifinals.

Aces: Only player he's lost to at the French Open is Nadal, who beat Sinner each of the last two years there. ... In February, split from longtime coach Riccardo Piatti and hired Simone Vagnozzi. ... Until the even-younger Alcaraz stole the show, was seen by many as a likely next great star of men's tennis.

The Draw: Could face No. 7 seed Andrey Rublev in fourth round.

He Said It: "I needed a change. Not everyone would have had the courage to make a decision like mine.” — Sinner, on the coaching switch.

Aces: The 6-foot-11 (2.11-meter) Opelka is winning 93% of his service games across all surfaces in 2022, 85% on clay. ... Titles this season include one on green clay at Houston. ... Was top-ranked American man last year; currently second behind Taylor Fritz. ... Reached semifinals at Geneva Open on clay in May.

The Draw: Could face No. 9 seed Felix Auger-Aliassime in third round.

He Said It: “I’m more open-minded to different court positions, different tactics, different techniques, different everything. That allows me to kind of find more ways to win when my Plan A and B don’t work.” — Opelka on adapting to clay.