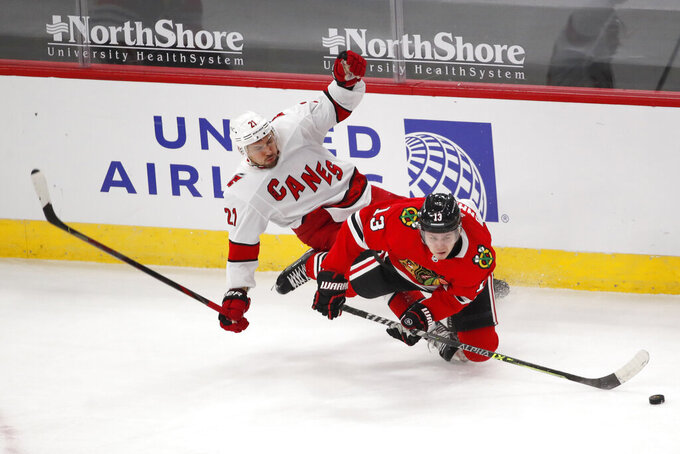 Thank divisional play through the first two rounds of the playoffs for a little extra spice at the NHL trade deadline.

As much as hockey executives like to say they worry only about making their own team better, several of the big moves executed Monday turned out to be important responses to division rivals. The arms races heated up in the East, Central, West and North right down to the wire, and because of this season's format, only one team will come out of each division to compete for the Stanley Cup.

“I think teams are trying to do what’s best for their team and trying to make their team better to compete in the playoffs here and win a Stanley Cup,” Washington Capitals general manager Brian MacLellan said.

After Pittsburgh, Boston and the New York Islanders made additions, East-leading Washington made the biggest splash by getting big forward Anthony Mantha. Florida couldn’t let defending champion Tampa Bay run away with the Central, so the Panthers traded for Sam Bennett.

In the West, Colorado followed Vegas’ move for more depth up front by doing the same. And Edmonton, Winnipeg and Montreal filled holes after Toronto went all-in to win now.

The Islanders struck early, getting forwards Kyle Palmieri and Travis Zajac from New Jersey last week for a first-round pick. The Penguins traded for two-time Cup winner Jeff Carter on Sunday night, just before the Bruins completed a deal for 2018 MVP Taylor Hall.

MacLellan said the Capitals pushing all their chips in for Mantha and acquiring depth forward Michael Raffl was independent of those moves. But sending core player Jakub Vrana, Richard Panik, a first-round pick this year and a second next year to Detroit for Mantha allows Washington to think it can hang with any of the other playoff teams in the East and beyond.

“When we’re on our game, I think we’re a tough team to handle,” MacLellan said. "I think we’re set up well to compete in the playoffs, and I’m kind of excited to see what it looks like.”

Everyone's trying to catch the Tampa Bay Lightning, who won the Cup in the bubble and will get Nikita Kucherov back in time for the playoffs. The Lightning getting physical top-four defenseman David Savard from Columbus over the weekend only ratcheted up the pressure on everyone else.

The Florida Panthers filled their own need with Aaron Ekblad out for the season, acquiring defenseman Brandon Montour from Buffalo. Then they sent a second-round pick and a highly regarded prospect to Calgary for 24-year-old forward Sam Bennett — the kind of player who can help them hang with the Lightning or Carolina Hurricanes in a playoff series.

“We want to remain competitive, and we want to do our best,” first-year GM Bill Zito said. "We want this team to be as good as it can be this year.”

Colorado is atop the league standings with 60 points in 41 games, but couldn't afford to stand pat after Vegas traded for center Mattias Janmark. The Avalanche, who have added two goaltenders in recent weeks to prevent against the injury situation that hurt them in the playoffs last year, reacquired forward Carl Soderberg in a deal with Chicago.

Vegas was more constrained by the salary cap than Colorado, and while GM Kelly McCrimmon was prepared to go into the stretch run with his current roster, he was also determined to add a seasoned veteran in Janmark who could make the difference in the postseason.

"No trade was a very real possibility," McCrimmon said. "We had a chance to make our team better. We felt the cost was one that we could afford, and with that we added the player.”

The Toronto Maple Leafs went all-in. How all-in? They're down to a total of six picks in the next two drafts after trading for former Columbus captain Nick Foligno, goaltender David Rittich and depth forward Antti Suomela.

The three other teams who will be in the mix in the all-Canada playoffs made smaller moves Monday but ones designed to build depth on defense for the kind of rough and tumble hockey that's coming in late spring and early summer. Edmonton got Dmitry Kulikov from New Jersey, Winnipeg added Jordie Benn from Vancouver and Montreal traded with Philadelphia for Erik Gustafsson.

“You want to take care of a few things,” Jets GM Kevin Cheveldayoff said, adding that Benn gives his team some more physicality. “Obviously a lot of teams did some other things, but for yourself, you look at what’s available in front of you, what fits and you make those moves accordingly.”