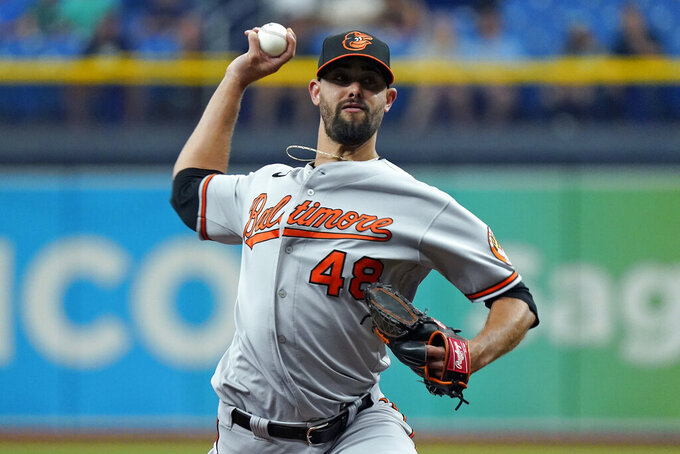 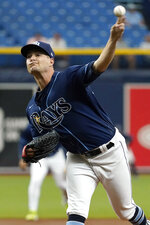 “It's not easy right now,” Orioles manager Brandon Hyde said. “We're not in many games, and that's hard.”

“The vibe in the clubhouse is good,” Lowe said. “Everybody is happy, we’re feeling good.”

Jorge López (3-14) became the majors' first 14-game loser, allowing four runs, four hits, two walks and hitting a batter over two innings. The right-hander was checked by a trainer with two outs in the first, which Hyde said came about because his velocity drastically dropped.

Hyde added “it's too early” to say if López needs some extra time off.

“I worked my whole life to get here and that's the last thing I will do is just give up,” López said.

Lowe connected on a two-out, two-run drive that made it 4-0 in the second. Lowe has six homers and 17 RBIs over his last 12 games.

McClanahan (8-4) gave up one run and five hits in five innings. He struck out eight and walked one.

Austin Meadows picked up his 83rd RBI with a two-out bases-loaded walk and Ji-Man Choi had a two-run single to put the Rays ahead 7-0 in the fourth. Meadows also drew a free pass with the bases loaded during a two-run first.

Baltimore’s Richie Martin had a fifth-inning RBI single, and Ramón Urías hit a solo homer with two outs in the ninth.

The announced crowd at Tropicana Field was 5,826, bringing the total for the four-game series to 22,754.

Orioles CF Cedric Mullins slammed his bat into the ground and broke it after popping out with a runner on second and two outs in the seventh.

The Rays' magic number to eliminate Baltimore in the AL East race is six. ... The Orioles (38-82) clinched a fifth consecutive under-.500 season. ... Tampa Bay has outscored the Orioles 128-57 in the season series. ... According to ESPN Stats & Info, the Orioles are the first team since 1900 to lose 15 straight games by multiple runs. ... Baltimore’s Ryan Mountcastle (11 games) and Jorge Mateo (10 games) extended their hitting streaks.

Orioles: Trey Mancini (sore left calf) was the DH after missing two games. ... OF DJ Stewart (sore knee) sat out for the second consecutive day. ... RHP Hunter Harvey (right lat strain) will be evaluated after his next rehab appearance in a couple days.