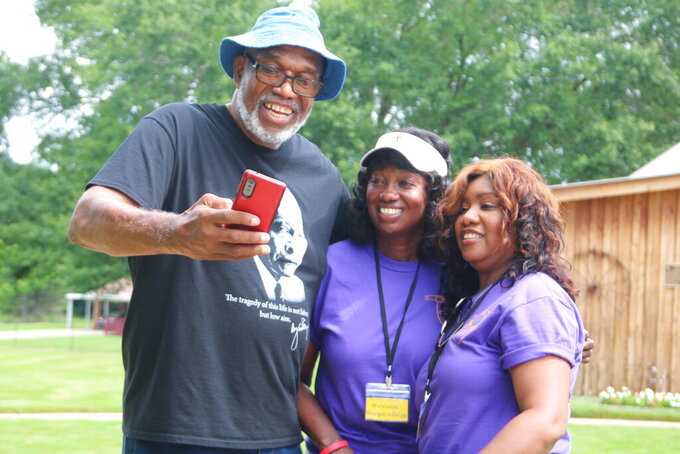 GREENWOOD, S.C. (AP) — Chris Thomas adjusted a stack of magazines on a table in front of the museum. Loy Sartin wiped down and dusted oil lamps in the cabin. It was a big day for the Dr. Benjamin E. Mays Historic Preservation Site.

Less than an hour later, a bus filled with relatives and descendants of the legendary and influential civil rights theorist, moral philosopher and former Morehouse College president pulled into the parking lot — the Mays family was coming to tour the site.

“This is the first time they’ve actually come for a tour,” Thomas said. “They’ve been here probably for every major event we’ve ever had at this site. We’ve had really, really good family participation.”

Mays, born in Greenwood County’s Epworth community in 1894, was born to Louvenia and Hezekiah Mays after they were freed from slavery. Mays would go on to challenge ideas of white supremacy and African American inferiority, pursuing higher education and earning a doctorate and becoming the sixth president of historically Black Morehouse College, as well as the first dean of the school of religion at Howard University.

Beyond his personal accomplishments, Mays’ work and ethic inspired Civil Rights leaders, and he was a personal mentor to the Rev. Martin Luther King Jr. Mays traveled to India during the Civil Rights movement and brought back with him the principles of nonviolent civil resistance, which he passed on to his disciples. Mays famously eulogized King after his assassination.

Much of that legacy is enshrined at the Benjamin E. Mays Historic Preservation Site at 229 N. Hospital St., where members of his family gathered from throughout the country to connect with their roots. Dozens of them, donning matching reunion T-shirts of purple and gold, poured off their tour bus to learn about their familial history.

“He was a moral influencer. In everything he did, he expressed to people a sense of morality, and for him of course it was Christian morals,” Thomas said. “I’m honored to do this. I think that Mays was certainly one of our great Americans.”

Benjamin Mays Blocker was the first to arrive. A great-nephew of Mays, he said he would spend summers visiting “Uncle Benny” at Morehouse, where Mays encouraged Blocker to pursue higher education. Blocker went on to attend Ohio State, then S.C. State before being drafted by the New Orleans Saints and going on to minister at multiple churches.

Now 76, Blocker was ecstatic to have the chance to see his uncle’s legacy firsthand.

It’s an opportunity to see my roots, for one thing, to reconnect,” he said. “I believe in history, because when I look at what Dr. Mays stood for, what my family stood for and how we’ve managed to come this far with doctors and lawyers, it’s good to come together and celebrate that.

“He stood for education, he stood for social justice and we represent that. That’s the legacy that he left: His family. We are that legacy.”

“She actually taught Uncle Benny to read, so he has stated that Susie was the smartest person that he knew,” Yeargin-Allsopp said. “Women in those days, of course, were not prioritized as far as education.”

When Mays started the first grade in a one-room schoolhouse, he could already read and write, putting him well ahead of his classmates. Although he would fight familial and social challenges to pursue higher education, Mays made it his life’s mission to encourage others to educate themselves.

“He wanted everyone in the family to be as educated as possible, and he facilitated that,” Yeargin-Allsopp said. “He helped people get into college and advised them.”

Even as a girl, she remembered going to pick up Mays at the train station when he visited South Carolina. After brief words with her mother, he’d ask the children how their grades were — B’s were unacceptable. He’d ask what they had been reading, and had no interest in the comic books they might have read, but wanted them reading “Time” magazine, or the newspaper.

When Mays traveled to Nigeria to obtain an honorary degree from a former Morehouse student who went on to lead a university there, he invited Yeargin-Allsopp along. It was the first time she ever rode a train, and the first time she tasted honeydew melon. She said the experience of traveling abroad with him helped shape who she became.

In 1964, she was looking to transfer to a more challenging college in pursuit of medical school. Mays suggested Sweet Briar College, though it wasn’t clear if they were accepting Black students.

She was told it was too late to be accepted, that admissions were closed, but Mays encouraged her to share his name with the staff. It turned out the college was looking for a student to help make the legal case for desegregation of the school; local governments were holding the school to its original charter, barring Black students from admission.

She ended up admitted, with a full scholarship, as the first African American student — and eventual graduate — at Sweet Briar. She went on to make another first as Emory medical school’s first Black woman to graduate. She now works for the Centers for Disease Control and Prevention in the field of developmental disabilities.

When Gina Hall-Boyd walked into the museum at the Mays site, she gasped. She looked around the room in a daze; Walls plastered floor-to-ceiling with her great-great uncle’s life story. Nearby was the cabin Mays was raised in; where his father often tried to convince him to return and tend the soil instead of pursuing further education.

“I had no idea, first of all, that they had kept such a historical record of all this,” she said. “Not to be cliché, but this was truly an immense honor. It’s so important that we continue to do this and pass this to our children. When you walk into that house and you see the struggle ... it shows the hope, and continues to show progress.”

Her mother, Beatrice Hall, is 88 years old. She had the chance to meet Mays when she was very young, visiting an aunt’s house. She’s from Pittsburgh, and while the broad strokes of Mays’ life were common knowledge to many in the family, the scope of his accomplishments were not. She knew little about Mays’ meeting with Gandhi, but hearing Thomas talk about his life, Hall was stunned.

“When it’s in your family, you just don’t think of the greatness of all the things that they’ve done,” she said. “I guess because he was a member of our family, we just took it for granted. He was a brilliant man, he was doing such wonderful work with Dr. King and all the other civil rights leaders.”

“You think, how could one man do so much in one lifetime? You’d think he wouldn’t have a free moment to do anything else. When did the man ever rest?”