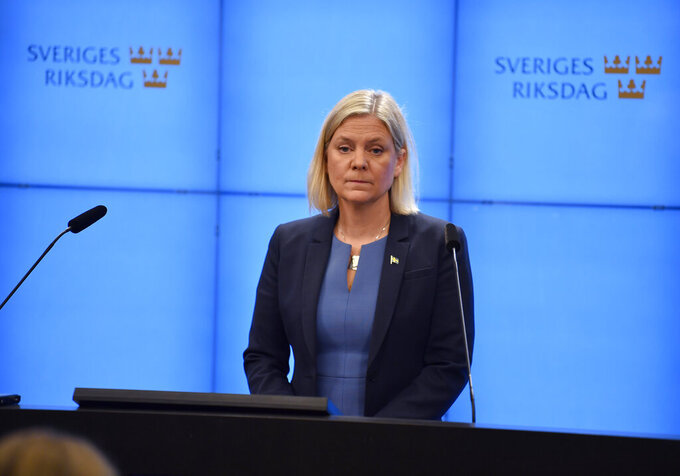 Pontus Lundahl/TT, ASSOCIATED PRESS
Swedish Social Democratic Party leader and newly appointed Prime Minister Magdalena Andersson during a press conference after the budget vote in the Swedish parliament in Stockholm, Wednesday, Nov. 24, 2021. Hours after being tapped as Sweden’s prime minister, Magdalena Andersson resigned Wednesday after suffering a budget defeat in parliament and coalition partner the Greens left the two-party minority government. ”For me, it is about respect, but I also do not want to lead a government where there may be grounds to question its legitimacy,” Andersson told in the news conference. (Pontus Lundahl/TT via AP)

COPENHAGEN, Denmark (AP) — Swedish lawmakers will vote next week on whether Magdalena Andersson, who briefly became the country's first female prime minister before resigning after a budget defeat, can form a minority government, the parliament speaker said Thursday.

Andersson served as prime minister for seven hours before stepping down Wednesday after the Greens left her two-party coalition. Their move followed the rejection of her government’s budget proposal — in favor of one presented by opposition parties including the right-wing populist Sweden Democrats, which is rooted in a neo-Nazi movement.

Andersson, leader of the Social Democratic party, decided then that it was best to step down from the post. She informed Parliament Speaker Andreas Norlen that she was still interested in leading a Social Democratic single-party government.

He was expected to formally nominate Andersson again later Thursday and a vote in the 349-seat Riksdag was set for Monday.

Norlen who oversees the government-building process, said Thursday that he “deeply regrets the course of events.” He said it could have been avoided “if I had received a message from the Green Party" that they would withdraw from the coalition before the vote that made Andersson prime minister. "Then I would not have nominated Magdalena Andersson.”

“This makes politics seem unreasonable and unpredictable,” he said, adding he believed it damaged trust in Swedish politics.

“I ... expect that we can deal with this urgently now and get a government in place next week,” Norlen said, adding that after consultations with Sweden's eight parties on Thursday he came to the conclusion that support for Andersson had not changed.

Under the Swedish Constitution, prime ministers can be named and govern as long as a parliamentary majority — a minimum of 175 lawmakers — is not against them.

The Social Democratic Party currently holds 100 seats. Together with their allies — including 16 for the Greens — they have a total of 174 seats. One independent lawmaker is likely to support Andersson.

The right wing of the Riksdag is divided. Ulf Kristersson, head of the opposition Moderate party — Sweden’s second largest — repeatedly has said that a center-right government is not feasible because no mainstream party wants to cooperate with the third-largest party, the right-wing populist Sweden Democrats.

Andersson's predecessor as prime minister, Stefan Lofven, is still leading the Swedish government in a caretaking capacity until a new one is formed.